A Downtown Business Expands, Opens at a New Address 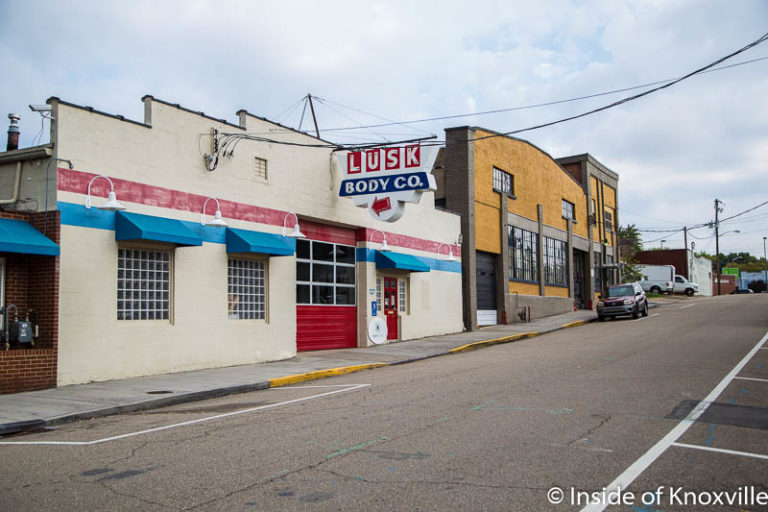 As the “maker” scene spreads and expands around the city, one business that’s been around quite a while recently moved in order to expand – and they could already use more space. It seems Knoxville wants to make things in a big way. Mighty Mud recently moved from its four-year home on McCalla Avenue to its new digs at 127 Jennings Avenue in the building best known as the Lusk Body Company building.

The area, as I’ve discussed before, is sort of eaten up by “makers” of one sort or another. Just next door is Ironwood Studios where John McGilvray does his woodwork and Preston Farabow does his metalwork. Just around the corner in one direction is Maker’s Donuts. In the opposite direction a block away is Magpies and Holly’s Corner. Tomato Head’s bakery will soon be on a nearby corner. High tech printing and design is two blocks away at High Resolutions and beside that is old school printing at Striped Light. That’s not to mention the Hive.

I talked to Barron Hall, owner of Mighty Mud to see what prompted the move and what’s up with the business. He bought Mighty Mud from Jessica Kortz, who he thinks was about the fourth owner. Once he purchased it, he moved it to McCalla from its previous home on Sutherland. An artist himself, he was operated Gallery 1010 for UT at the time, he wanted it to be nearer an art scene.

Originally from Auburn, Alabama, Barron grew up in Tampa, Florida. He obtained a BFA in Ceramics and Sculpture from the University of South Florida. When he was offered a full scholarship to pursue his MFA in Ceramics at UT, he moved to Knoxville in 2004, completing that degree in 2008. He worked at the Cumberland Avenue Starbucks during this time, becoming the store manager. He’s worked as an adjunct instructor at Roan State and Walter State and currently at Maryville College.

He’s excited about the new location and has already seen a considerable increase in support. They are hosting First Friday and other events and classes are often filled. The building is leased for five years and currently includes twenty-two studio spaces – which are currently used by forty artists.

Where the old space on McCalla had about 2200 square feet, the new space is about double that. Usable space is even more of a contrast because the previous location had no storage beyond the 2200 which meant a forklift and art supplies, for example took up a good bit of that. The new location features a storage building in addition to the studio building.

The additional space was immediately filled from a waiting list and Barron is already looking at the possibility of adding more studios. Artists pay per square foot for a studio the size they need. Some artists share space. Use of kilns, wheels and glaze carries an additional cost. All artists are given a key and a code and 24/7 access.

While I wasn’t surprised to learn about that part of the business, I was interested to learn that there are additional income streams. Mighty Mud sells clay and ceramic supplies to the artists, but also to local schools and, increasingly, to college programs across the country.

They also have an on-site gallery and operate a booth at the Market Square Farmers’ Market and artists working in the gallery are selected for each based on the quality of their work. Artists get 70% of sales and Mighty Mud gets 30%. While most artists apply their earnings toward monthly rent, three are making significantly more than rent from their sales.

Classes are also offered through the course of each week on such topics as Handbuilding/Sculpture, Raku Firing, Wheel Throwing and more. A Friday night “Wine and Wheel,” class is particularly popular. There are also Friday night activities and lots of other ways to get involved. Class sizes are generally small due to the nature of the topic and the constraints of the equipment.

In addition to these other sources of income, Might Mud offers the Mighty Mud Mixer. It’s a way people around the country can obtain specialty glazes to their own recipe without having to store supplies. Mighty Mud also has a list of stock glazes for sale.

Barron says that when he purchased the business, the recipes they use were manufactured by a company in California, but they went out of business last year. Recognizing a gap in what is available nationally, he made the decision to become the provider and that portion of the business looks to do very well. The company is advertising the service nationally.

It’s appropriate that we feature a Maker business today, as the second Maker City Summit will be held from 9:00 AM to 6:00 PM today at the Mill and Mine. But call it what you will, Knoxville and people like Barron are making things. In this case, beautiful things. And they are making our city just a little cooler in the process.

Get over to 127 Jennings and check them out. Look for them at the Market Square Farmers’ Market, “like” them on Facebook or check out their calendar for a class you might like to take. Mighty Mudd is closed Sunday and Monday, open 11;00 AM to 6:00 PM Tuesday through Friday and 9:00 AM to 5:00 PM on Saturdays.