Yes, Downtown Knoxville Has a Pharmacy, And Now We Have a New Pharmacist 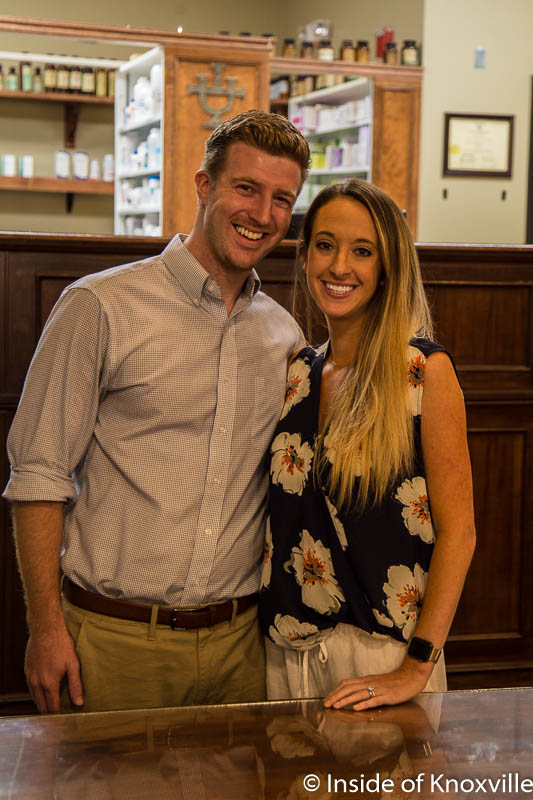 It’s a question they say they’ve gotten repeatedly in the few days they’ve been in the downtown pharmacy: “Is this a real pharmacy?” Brad and Hannah Blackwell recently purchased Charlie Southerland’s ownership percentage in the Phoenix Pharmacy and settled in last Friday. They agreed to chat for a few minutes about the business, themselves and their hopes and plans.

Hannah is the pharmacist and owning an independent pharmacy runs deep in her family DNA. Her grandfather owned and operated Marcum’s Pharmacy in Kingsport for many years. Her brother is a pharmacist and now owns and operates that pharmacy with his wife, who is also a pharmacist. Her father – the missing generation in the pharmacy tradition is a physician. She also has an aunt who opened her own pharmacy.

That she would become a pharmacist was almost a family expectation. She obtained her BS from UT and her Pharmacy degree from ETSU. After graduating in 2013, she worked for a large pharmacy chain, but knew that wasn’t what she wanted.

The couple who had known each other in high school, were married in 2013 and after Brad finished his MBA (both his BA in business and his graduate degree are from UT), the two began rehabbing and selling homes. He worked as a consultant, working with medical companies such as Covenant Health. He’d decided to pause his budding career as a musician, performer and songwriter (he played the Bijou, opened for Darius Rucker and others) in order to move forward with his new wife. He confessed his greatest pleasure was in the business end of the music.

But the couple felt pulled. They had lived in the Daylight Building for three years while he was in school and they felt a pull to plant their flag in Knoxville – and particularly in downtown Knoxville, not in their hometown. The two also felt a strong desire to own their own business and the pharmacy business was the obvious fit.

Hannah had put out feelers to simply fill a part-time pharmacy position at the Phoenix Pharmacy when she learned that a portion of the ownership, along with the position of head pharmacist might be available. The couple did not hesitate to do everything they could to make the transition happen. Calling it the, “coolest pharmacy in town,” they knew it was the right fit.

Their vision for the pharmacy begins with making a similar kind of personal connection to patients that they understand Charlie made before them. They appreciate what he did and want to build on his success. They are looking to move downtown and want to be a part of the community.

Any changes to the pharmacy will likely be subtle and slow, but they know they want to have a focus on healthy living that will include books on healthy lifestyles and, they hope, lectures on health topics by local healthcare partners. Hannah said the focus of health care providers should be to have patients feel better and be healthy, not necessarily to have them take more medication. In a way, she pointed out, it fits with the retro feel of the pharmacy in that  it’s an advocacy of a return to a time when we didn’t take so much medicine.

The couple both strongly feel that there is no better place to receive personalized medical care than an independent pharmacy and that’s what they intend to deliver. To that end, they want you to know they are open to suggestions regarding any improvements they might make to serve downtown better. They will continue doing deliveries to homes or businesses – in any part of the city.

They would like to see more commuters – downtown workers who live outside the center city – take advantage of their prescription services, but it continues to be critical that downtown residents support them with their business. And pass the word: Downtown has a real pharmacy. Stop in and meet Brad and Hannah and tell them you read about it here.

Charlie reached out and asked that I release a statement from him and his family regarding the transition. He called it, “a really tough farewell.”

To our downtown family,

We wanted to take a moment to say thank you for believing in me and trusting us with you and your family’s well-being while at the Phoenix Pharmacy.  With that being said, my last day as co-owner and pharmacist was Thursday, July 27th, as I completed the sale of the pharmacy to Brad and Hannah Blackwell.  This decision was not made lightly and was easily the most difficult of my career, as well as a very difficult one for my entire family.  We have loved being a part of the downtown community. The relationships we have made while serving there will be forever cherished, and we will dearly miss seeing your smiling faces and friendly conversations each day.  Unfortunately, our dream has come to an end, but the pharmacy will live on with Brad and Hannah, who have many plans and hopes for the future of the pharmacy.  Thank you again for all that you have done for me and our family. We will miss you all!

He is currently working with a friend to help build that friend’s compounding pharmacy business.