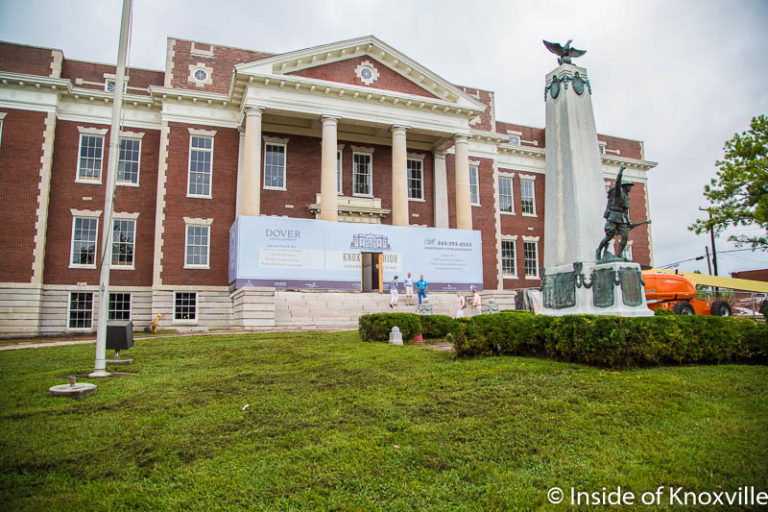 Just a few short years ago, the old Knoxville High School building was considered in danger of being lost. Built in 1910 and designed by Baumann and Baumann (same as the Andrew Johnson Hotel), the building ceased use as a high school in 1951, subsequently becoming primary administrative offices for the Knoxville City Schools, and serving Knox County Schools in various capacities after the merger of the school systems.

During its tenure as a high school, it boasted several notable accomplishments and/or historical markers for our city. It was the first coed high school in Knoxville, serving as the primary high school until its closure, at which time West High School, Fulton High School and East High School were opened. Improvements were made to Austin High and South High at the same time.

Opening with just 646 students, enrollment eventually topped 2300. Changes were made to the original building, with expansions coming in 1914 and 1920. The doughboy erected in 1921 to commemorates the 117th Infantry Division soldiers which included a number of Knoxville High School graduates. The school won numerous sports championships, including national championships in 1930 and 1937. Interestingly, while W.J. Barton served as the school’s first principal, W.E. Evans served as principal from 1917 through the closure of the school.

The history of the building took a turn just a few years ago when a request for proposals was issued. In competitive bidding, an agreement was reached with Dover Development to redevelop the building as a senior living development. Misunderstandings of the type of development have persisted, as many have understood it to be a nursing home. The website identifies it as a, “lifestyle-focused community, rather than a health-care focused assisted living community.” Mr. Dover, in conjunction with Knox Heritage, opened the building to Knox Heritage members this past Friday night for a preview of what is happening there.

Also termed, “independent living apartments,” the minimum age is fifty-five and the idea is to appeal to an older demographic who may have tired of home ownership and its responsibilities and who would like to live in proximity to peers, with amenities provided to make life a bit easier. Amenities include 24/7 staff, a full time activity director, a fitness center and salon/barbershop. Transportation to restaurants and events will be included.

The seventy-five planned units on three floors of the building will each include full kitchens and washer/dryer connections. With views varying from street views to skyline and north Knoxville vistas, each unit is different than the others. Occupying former classrooms and other spaces, Mr. Dover said the plans were dictated by what was already present, saying, “It sort of told us what to do.” He also noted that the building was in great shape relative to some he’s worked on. No doors to the classrooms were removed, nor were any added.

Noting that he marveled at the majestic architecture, he said, “It was designed to be an inspiring building.” As a nod to the history of the building, graphic displays in the main hall will tell the story of the school. The Knoxville High School Alumni Association has maintained records and preserved memorabilia which will be on display. The building will be open to the public and they hope those living graduates and their children and grandchildren will visit.

Dover said plans have expanded to include a bar, restaurant, lounge and spa. He hopes to have celebrity chefs make monthly visits to the interactive kitchen, offering classes to residents. Art studios are being added in the attic where once, according to Dover, a rifle range existed.

Saying it is being constructed on a, “social model,” he acknowledged that it is being likened to a cruise ship and he didn’t seem to mind the comparison. Broadband access, an outdoor movie screen, fountains and gardens complete the package.

In terms of architectural elements, some of the original maple floors remain. Some stair balusters have been replaced over the years and no longer match. He said these will be removed and replicas of the originals will take their place. Original doors (which are beautiful) will remain, along with the transoms situated over many of them. One central hallway is particularly striking for its elevated internal windows which allow light from external windows to flow into the center corridor.

He also pointed out that ceilings had been repeatedly lowered over the decades. These have been raised, once again, to their original height, exposing many original ceiling tiles. Walls were repaired to remove the markings from the inserted lower ceilings.

In a personal note, Dover related the story that many years ago he had asked Kristopher Kendrick, the father of modern preservation in Knoxville, which building he would bring back to life given the choice of any local structure. He said Kristopher, who would develop Kendrick Place, Patrick Sullivan’s (now Lonesome Dove) and many others, immediately named Knoxville High. It makes this project more important for Dover to do and to do well.

The building will boast, “at least two dozen staff” and Dover said the plan is to bring the units in at “below market prices.” The total cost for the project will be about fifteen million dollars. And the plan is for the units to be ready for occupancy in November. Interested? You’ll find the website here, but your best connection might be to call for more information or a tour at 865-293-6563. Want to be included in future tours like this one? Join Knox Heritage today.

And the fate of that doughboy statue? It was the first question asked from the crowd. Rick assured everyone that it will be restored and preserved for future generations.