PostModern Spirits and Methodology are Open For Business 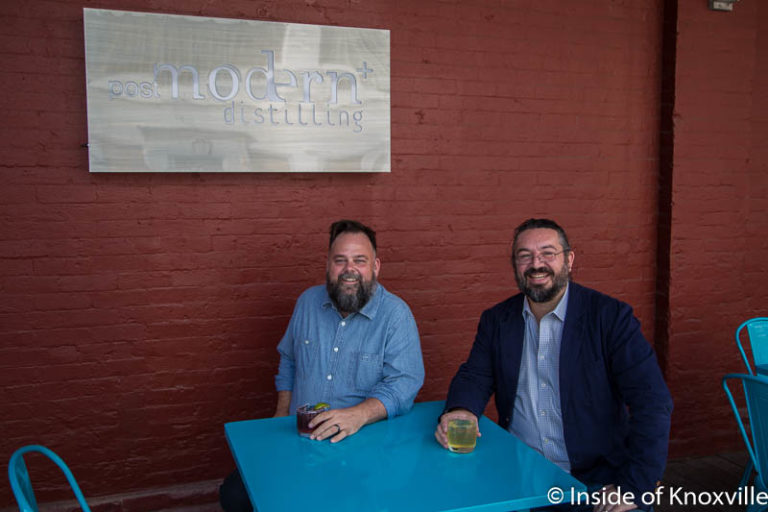 In the heart of the Old City a new distillery opened its doors this week. PostModern Spirits, the brainchild of a group of investors including Eric McNew and Stanton Webster, is distilling spirits and serving up drinks at 205 West Jackson. A grand opening is planned for August 16, but the threw the doors open this week and response has been very strong.

Initially planned as a distillery with a small tasting room, the concept expanded when, half-way through their planning, the state legislature approved sales of full-sized drinks at distilleries. At that point, they planned more seating and more of a cocktail lounge as the face of the distillery and Methodology Cocktail Lounge was born.

Thus far they have distilled spirits for vodka by the bottle (and drink), as well as two gins and two liqueurs. Kore (pronounced Core-Ē) Vodka is named for the Greek goddess Persephone, the Mother of Vegetation, who is often pictured holding a piece of grain. It is, “carefully proofed and filtered five times to bring an unparalleled silky, velvety mouth feel and (a) clean, neutral finish with no added sugar.”

They offer a dry gin (Empirical) and a, “contemporary American gin,” (Giniferous). An Eldeberry Gin Liqueur and a Chamomile Liqueur (infused with chamomile, elderflowers and dried apricots). Whiskey has been barreled and is aging and more will be distilled to keep the flow moving.

I spoke to co-owner Eric McNew who said the front-of-house focus will be on preparing excellent craft cocktails from their distilled spirits. They’ll also offer each of the beverages by the bottle, as well as a line of products including t-shirts, hats, shot glasses, cocktail glasses, bitters, tonic and everything needed to make simple cocktails. They’ll also offer recipes for those of us who need a little guidance.

They will also offer a few cigars (to be smoked outside) thanks to a partnership with Park City Cigars and bar snacks by Holly Hambright and Jeffrey Dealejandro. Additional partners include Crafty Bastard where they perfected their recipe and Fanatic who prepares their mash.

You’ll also soon find a schedule of activities at the distillery. Tours will be offered of the facility and including education about the process and samples. Tours are likely to be offered Thursday, Saturday and Sundays with a portion of proceeds going to local charities. Pop-up dinners and classes are also being planned.

Seating has been approved  for thirty-nine inside the lounge space, but seating for a couple dozen more is located outside and that will likely be expanded. The outdoor seating area has to be one of the best in the city, with a cover extending over the large boardwalk and colorful tables running along the front of the distillery and merging with those from Pour next door. It promises to be a festive spot into many Old City nights.

Early response has been very positive to both the space and the product. Eric did the design work for the lounge and he reported that initial sales to local liquor stores and bars went very well. Essentially, he asked and they bought, so watch for PostModern products at a liquor store near you and ask for it in your favorite bar.

Initial hours (including today)  will be set for Noon – 11:00 PM Monday through Saturday and Noon – 7:00 PM on Sundays. Hours may be adjusted, but distillery hours are regulated by the state, so they can’t be expanded further into the night.

The Grand Opening will be Wednesday from 5:00 PM to 9:00 PM with food by Holly Hambright and music by Exit Annie. Cocktails and spirits will be flowing, so check it out. Pop over to Facebook and give them a “like,” and find them on Instagram (@PostModern Spirits) and Twitter (@PostModSpirits)