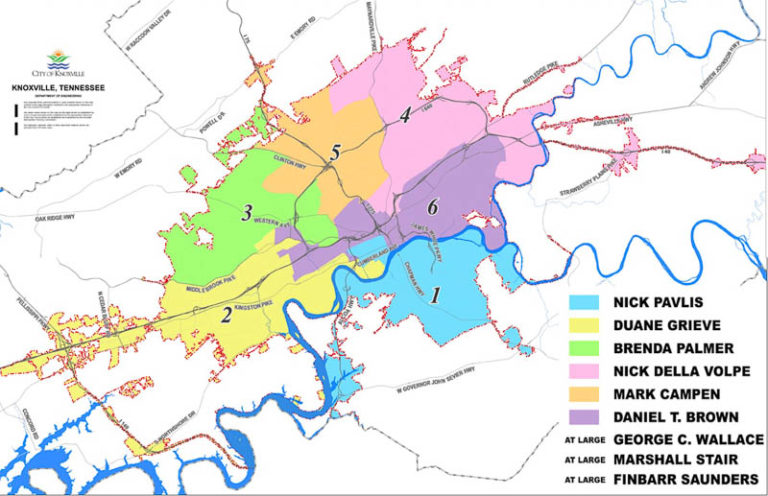 Downtown is located in the sixth city council district. It’s an oddly shaped district extending far to the east along Magnolia, including downtown and stretching to the west along Sutherland. Neatly carved out exceptions remove Holston Hills and Fourth and Gill (both District Four though everything in between is District Six), Fort Sanders (a weird cut out north of the river for District One) and Sequoyah Hills ( District Two).

With thirteen candidates vying in the primary for the two spots in the general election, it warrants some study. I asked Dean Novelli* to take a closer look at this rapidly changing district which includes areas of increased populations both in Parkridge and in downtown Knoxville. The seat is currently held by former Mayor Dan Brown, who is term-limited. Here’s Dean:

“This is an unprecedented election,” Mayor Madeline Rogero told the expectant crowd attending a GO Vote! Knoxville event at the John T. O’Conner Senior Center, adding “in a race like this, particularly with this many candidates, YOUR SINGLE VOTE could make the difference.” In the 6th District race for city council this has never been truer.

The 2017 City Council election is already one for the history books and the voting hasn’t even begun. With a total of thirty candidates seeking to fill one of five city council seats – the vast majority running for public office for the first time – the 2017 primary has set a record for total number of candidates in a city council primary. The 1st, 2nd and 3rd Districts have four candidates each and the 4th has five.

But it is the 6th District – with an unprecedented thirteen candidates – that is setting multiple records starting with: most candidates in a single Knoxville city council primary race.

“Historic election,” agrees Clifford A. Rodgers, “every vote will matter.” He would know. As Administer of Elections, for the Knox County Election Commission, Rodgers is responsible for the smooth, efficient and “unhackable” elections held in Knox County. He is also the man with all the numbers. And the potential numbers for this primary are jaw-dropping.

Primary turn out is historically low, very low. In the last three 6th District city council primaries an average of 499 voters participated, with 2005 seeing a high of 608 votes cast. That is a primary participation rate of about 5%. With 12,691 registered voters currently in the 6th District, a 5% turn out would translate to 635 voters. Divide that by thirteen candidates and in a competitive race as few as 50-60 votes may be enough to advance to the general election. And yes, that would be historic too.

But will turn out be low or historical? What if the 6th District experiences an unprecedented surge in primary voter participation to match that of the candidates running. Instead of the usual dismally low primary turn out, the possible surge result: a record setting high turn out in this specific primary.

It all depends on each candidate’s ability to master that well worn path to political success, getting out the vote. The candidates with the organizational ability – the ground game – to deliver their supporters to the polls in significant numbers are the ones who will prevail in the 6th District or in any race.

That said, a bold prediction for the 6th District: any candidate with 100 votes has a chance, anyone over 200 is moving on and it is absolutely certain the top two vote getters – however few the votes – will be in the general election. Candidates, if you haven’t already, start counting your supporters and then, start turning those supporters into voters.

Something to watch: A potential first in any City Council race, as far as I know, and certainly a very real possibility in the 6th district with six women among the thirteen running, is the top two candidates emerging from a primary being women. The same thing is possible in the 1st and 4th Districts where two women are among the candidates in each race. Consider the possibility: three out of five city council general election races could be between women only, an outcome ensuring three of the nine City Council seats are not occupied by men. Wouldn’t that be historic? It’s something long over due; greater representation of our diverse community on our governing bodies.

Speaking of diversity, another important first happening in this election, also a part of 6th District history, is the candidacy of Shawnee Rios, the first openly atheist candidate known to stand for election in Knoxville, Tennessee.

A final thought: The 6th District has been the only black-held seat on city council since Theotis Robinson Jr., the first black to hold elective office in Knoxville in fifty-seven years was elected in 1969. With the changing demographics of the district reflected in four white women running, there is a possibility Knoxville could lose it’s only black elected official as a result of this election. Mr. Robinson, a trailblazing civil rights leaders still active today, has expressed his views on the situation. The question is: Will the unique and important perspective of Knoxville’s historically black 6th District be lost to greater gender diversity, resulting in the first all white city council in nearly five decades.

Get the idea? This primary is a big deal. While every moment is part of history, this election truly is historic. Never has Knoxville seen a ballot with the diversity on display in the August 29th primary. And the 6th District is ground zero for that diversity. Don’t stand on the sidelines and watch. Be a part of this “unprecedented” moment in Knoxville’s history, stand up and be counted. GO Vote!

Early voting begins August 9th (thru the 24th) and is held at the Love Kitchen in the 6th District. The date of the primary is August 29 and the general election will take place November 7. Will you be a part of it?

*Dean Novelli, an Oak Ridge native, is a local McClung Award winning history writer best known for “On A Corner Of Gay Street: A History Of The Lamar House-Bijou Theatre, Knoxville, Tennessee, 1817-1985.”  Dean has a BA in Political Science from the University of Tennessee, Knoxville, and an  MFA in Management from the California Institute of Arts. You may contact Dean at lamarhouse200@yahoo.com.