What’s Being Built? How’s It Coming? 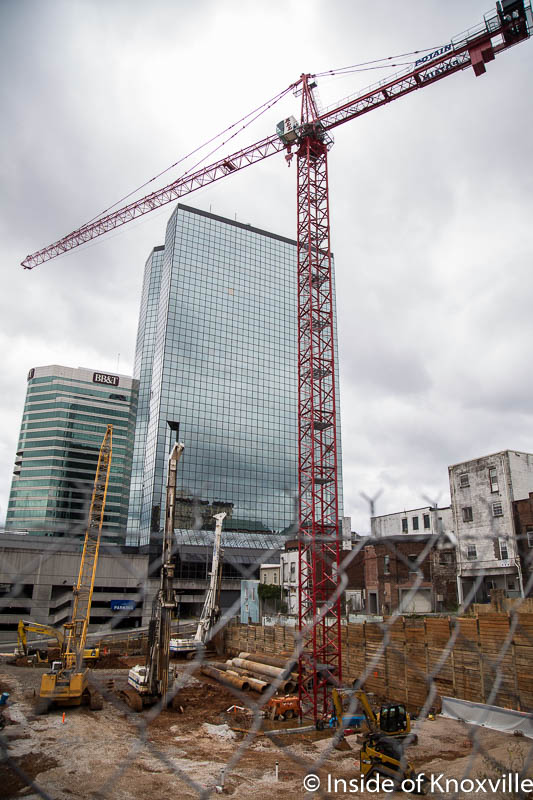 Given the intense interest in new construction and some conversations I’ve heard recently indicating people have missed a few construction announcements along the way, it seems helpful to sometimes review some of the projects and report on their progress. So, here, in no particular order are some of the projects which are currently underway along with updates from the various developers.

It was fourteen months ago that I first wrote about the possibility a Courtyard and Residence Inn by Marriott might be built at the corner of Church and State. I stated the advent tentatively and a number of people questioned whether the project would happen. It’s happening. The site currently features a tower crane, one of the largest cranes downtown Knoxville has seen in quite some time.

I spoke to Rick Blackburn, Project Manager, who said everything is on track. He pointed out that there are a series of permits that have to be acquired as construction progresses: a Site Disturbance Permit, a Foundation Permit and when the project is ready to get into high gear, the official Building Permit. That final permit was issued Monday.

The work to this point has been on the foundation, with 95 caissons to be inserted 75 feet into the ground. Approximately 2/3 of these are complete. Temporary power has been installed on the site and concrete should begin pouring in the next couple of weeks. Plans call for an opening date by August 2018.

At the other end of downtown, Regas Square, first announced here in October of 2015, continues to make progress and has a monster crane of its own. Joe Petre of conversion properties says the rainy spring has been a challenge with large amounts of water pumped out of what has at times seemed like a very large mud pit.

Other than fighting the rain, the news is good from this end of town, with 47 of the 101 condos already under contract before the building comes out of the ground. Foundation work is done and slabs should be poured as soon as the weather is dry enough to begin. Planned delivery date is October 2018. You can connect with them via the ad to the right of this article (or below, if you are on a mobile device).

I also spoke with Rick Dover of Dover Development who has a number of projects underway. The two that are the furthest along are the conversion of Knoxville High School to senior living units and the Farragut Hotel. Of note is an event hosted by Rick and Knox Heritage on July 28. Members of Knox Heritage will be offered a guided tour of the building. It’s a good time to join the organization and get a behind-the-scenes look at what’s happening there.

Regarding progress of the two buildings, Mr. Dover said crews are working weekends and holidays to progress as rapidly as possible. Dover first discussed alternative plans for the Farragut in January 2015, shortly after he made the purchase. By April of 2016 plans had changed and the announcement was made the building would return to hotel status under the Hyatt flag. Both buildings should be open and ready for residents or guests, as the case may be, by November 2017. That’s not much more time, but he seems confident they will meet the goal.

He’s also involved in several other projects that are further out in time. Residences at Pryor Brown is progressing, with the architectural and engineering preparatory work complete. The project has, “gone out for bid,” and he hopes to be ready to begin as the other two end. He expects the work to take sixteen to eighteen months, with a hoped-for completion of spring of 2019.

South High School (not in downtown, but another Dover project) is on a similar schedule to Pryor Brown. Architectural work is done, with engineering and budgeting to follow. The site has been cleaned and prepped for construction as they await historical approvals. He hopes to begin near the beginning date for Pryor Brown.

Further out, yet, for Dover, is the State Supreme Court Site which is currently in a site planning phase. He expects work to begin there in late 2018, which will result in three major projects underway simultaneously.

The Crozier Building in the Old City was mentioned earlier this week in connection to the new Stockyard Lofts as Legacy Capital is a partner in that project. I spoke to Daniel Smith regarding the Crozier, which many readers noted took a very long time to get underway. I first wrote about it in November 2015 when plans for demolition of the previous buildings at that address were announced along with plans for the new construction. Almost a year later, in October 2016, revised plans were announced that increased the building height by a floor.

Now, twenty months after the original announcement, progress on the site is clear and seems to be moving at a rapid pace. Daniel tells me they have quietly begun marketing (Facebook page here), with plans to ramp that up very soon. Four of the nineteen condos are under contract with prices starting around $280 per square foot. Interest is heating up for the retail portion of the building, as well. They are on target for an early spring 2018 opening.

Finally, a note on Clinch River Brewing, a restaurant and brewery slated for the ground floor of the Holston building. First announced here in July of 2016, much work has been completed, but progress appears to have stalled recently. Originally set to be open by this time, a recent note from the owners to Holston residents noted the recent inactivity and indicated the delay is due to preparation of final architectural drawings for the city. They assured everyone they will be open for business as soon as possible.

So, while this list is not complete, it gives you a sense of how rapidly downtown will be changing in the near future. The Farragut and the Knoxville High School projects will be completed this year. 2018 will see the opening of the Marriott Hotels, Regas Square and the Crozier. More will follow. It’s an exciting time in the city.