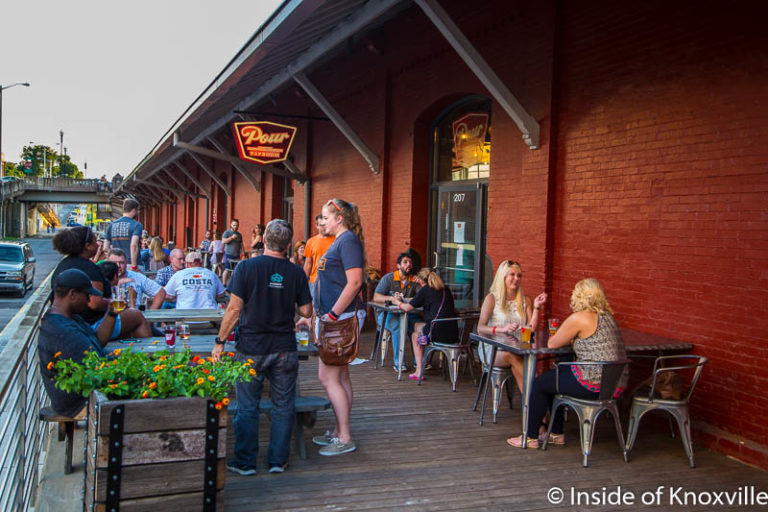 Slipping intentionally under the radar last week was the official opening of Pour Taproom at 207 West Jackson in the Jackson Terminal Building. Wanting an opportunity to try out the systems and operate at a lower volume to get the kinks out, the crowds grew through the week as word spread about the new business. By Friday night crowds were large and it was easy to see how the business might soon test its 193 capacity.

It’s a novel concept and Caitlin Riley, who co-owns the business with Sami Natour and Joel and Mariah McLead, walked me through the process. Patrons are assigned a wrist band which is linked to their credit card and handed a glass and free access to 68 taps. Scan the band, pour as much or as little of a particular brew as you’d like to sample and then move on.

Each ounce is tabulated and the customer is charged at the end. Customers don’t even have to check in at the end, they may simply drop their wristband at the door. No trying to get a bartender’s attention for another drink, no being stuck with a full pint you don’t really care for and no wait at the end to clear your tab.

Caitlyn told me of one woman who had come in earlier in the week, sampled a bit of nine different beers, but drank less than 16 oz and had a bill of under ten dollars. The idea is to enjoy a range of beers and try new ones without the investment of purchasing an entire pint. And like the woman Caitlyn mentioned, not over-indulge while doing so. In fact, the bracelets are set to cut a customer off at 28 oz or about 2 1/2 beers. At that point a customer must speak with a bartender for a refill on the bracelet.

The 68 taps include a wide range of beers – and more. The emphasis is on beer and the taps are divided into types of beer, such as dark and light, seasonal and IPA. Numerous craft beers are included, some of which you won’t likely find locally outside the establishment.

Pour has a liquor license which allows them to offer high gravity beers such as a hard-to-find Mikkeller which is 18.9% alcohol and costs $13 a pint – though with their system, you can sample a few ounces. Taps are reserved for each of the local breweries, as well. You’ll also find taps devoted to cider, mead and wine.

The room is open and features ceilings open to the beams with a mixture of lighting allowing the space to retain some of its industrial feel. Walls are decorated with graphics related to Knoxville and cityscapes from the Old City. Glasses and koozies are offered for sale and televisions, elevated far above the floor, play without sound.

One of the most attractive features of the space isn’t actually inside the space. Outside is a very wide boardwalk reconstructed when the building underwent extensive renovations. About 70 seats at tables under an overhang offer an inviting spot out of the elements and offering a cool view of the Old City. It’s one of the largest and best spots to relax in the city and avoid the sun or rain. And it’s pet-friendly.

A brief menu is offered including small plates and sandwiches prepared by All Occasions catering. Various dips and hummus along with tortilla and pita chips fill the small plate menu. Sandwiches currently include grilled chicken, grilled cheese, a cuban, panini and curry chicken salad on a crescent roll. Prices are $6 and $9. Customers are also welcome to bring in outside food, such as that offered across the street at Curious Dog. The menu is likely going to evolve and food trucks will soon be serving just off the outside seating area.

The establishment is 21 and up only, so children can’t enter with their parents. Entry is also denied canine family members, due to the open kitchen. Initial hours are Sunday through Wednesday, Noon to 11:00 PM, Thursday, Noon to Midnight and Friday and Saturday, Noon to 1:00 AM.

A grand opening event is planned for this Friday, but they are open for business and waiting for you. Check out their Facebook Page and give them a “like.” You can also check out their webpage and follow them on Instagram.