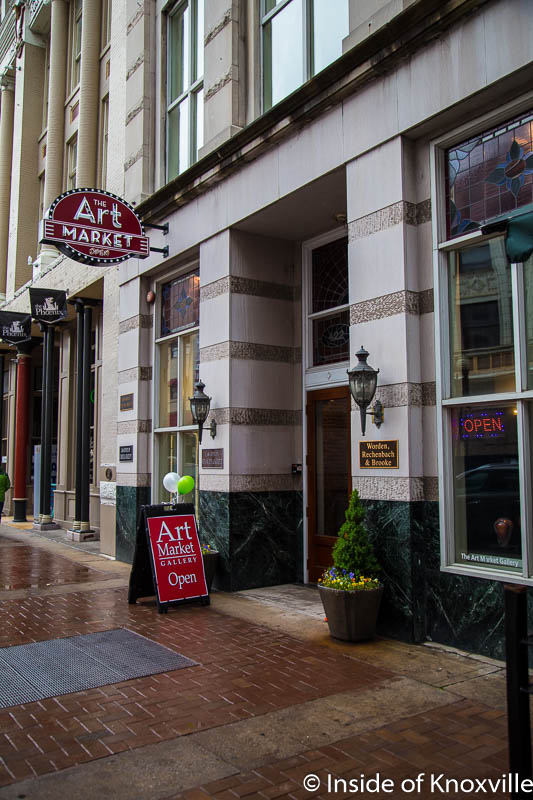 The 400 block of Gay Street is probably the most active block in downtown Knoxville that isn’t called Market Square. If you asked downtown visitors to name the businesses they frequent off Market Square, many would name Mast General Store, Downtown Grill and Brewery, Babalu and Sutrees. Maple Hall and the Phoenix Pharmacy and Fountain might come to mind. But only one business on the block is celebrating its 35th year and it’s one that sometimes seems overlooked.

The Art Market Gallery is a cooperative of over sixty area artists and artisans representing virtually every kind of medium you could imagine, from painting to sculpture, wood-working to jewelry making and clothing to photography and print-making. It’s a dizzying array of art and crafts all assembled at 422 South Gay, curated by artists, represented by artists and with the profits going to those artists.

It may be hard for those of us experiencing the Knoxville of 2017 to imagine such a thing, but as recently as the 1970s, and arguably later, Knoxville didn’t have an art museum. The Dulin Gallery of Art formed in 1961 in an effort to promote the arts. In 1982 it opened a small gallery to showcase local artists in the Taylor Home, which was adjacent to the Dulin Home housing the Dulin Gallery of Art, and the Art Market Gallery was born.

Within a few years the Dulin outgrew its space and they joined the community in raising $11 million to fund the current Knoxville Museum of Art overlooking the World’s Fair Park. During this period, the Art Market moved to the Candy Factory, starting in 1986, while the KMA opened in its current home in 1990.

In 2006, after sixteen years in the building, the Candy Factory was converted to condos and retail and the group moved to their current home on Gay Street in the Cable Piano Building at 422 South Gay. Built in 1905 – after the great fire of 1897 destroyed nearly the entire block – the building was purchased to be leased to the group and renovations revealed the original floors and tin ceilings buried beneath decades of modernization.

Numerous events, cooperative efforts with the schools and an expanding membership have marked the years since starting at Taylor House. While the idea has remained virtually unchanged, the scale has changed dramatically. I met with painter Brenda Mills who has been a member for about thirty years and with printmaker/collage artist/painter Marilyn Avery Turner who has been a member from the beginning.

While none of the artists involved are likely to get rich, one indication of how far they’ve come is reflected in the story of the month – some months after the opening – that the artist closing the shop the final day of the month realized they had sold $96 worth of merchandise that month and so she made a personal $4 purchase before closing the doors so the group could celebrate their first $100 month. Thirty-five years later, that would be a bad day.

The fact that the gallery is run by artists makes a big difference, both women said. Payments are made promptly to artists, which is something that doesn’t always happen in other galleries. Artists are also free to show their work elsewhere and their percentage is higher than they’d likely get at other galleries. Marilyn pointed out that they all enjoy working together, saying it, “is a team mentality. People are cooperative.” Brenda added that, “People also love the way their work is exhibited.”

After having their work accepted for display, artists have to agree to work three days a quarter in the gallery. They are also expected to be a member of one of the committees, whether it involves displays, event planning or any of the many other tasks involved in operating the business.

Events include First Friday open houses which often include music, food and a featured artist. The group also hosts a silent auction every April in conjunction with their annual meeting and a fundraiser for the Community School for the Arts every Christmas. They’ve also been hosting live artist demonstrations during the Market Square Farmers’ Market on Wednesdays and Saturdays.

You’ll find that the gallery itself and the merchandise are continually refreshed. Even the internal walls move, meaning that the space shifted from the time I took the initial photographs to the day of the interview. Parking is currently available just behind the next block in the State Street Garage and the gallery is a block from Market Square.

The group is an active partner downtown and they pointed out the successful relationship and help they’ve gotten from CBID. They include coupons in welcome packages for new downtown residents and they offer a 10% discount to members of City People. All customers get a 10% discount of their next purchase if they make a $100 purchase. They are also teaming with the East Tennessee History Center for a World’s Fair Exhibition on August 19 in conjunction with the History Fair.

Hours vary somewhat during the year: Mondays they are closed, except in November in December. The rest of the year they are open from 11:00 AM to 6:00 PM Tuesday, Wednesday, Thursday and Saturday and Noon to 6:00 PM on Sundays. While they are known for First Fridays, they are actually open extended hours every Friday – from 11:00 AM to 9:00 PM.

It’s a great place to pick up a one-of-a-kind gift representing the art of our region. If you’ve overlooked them, stop by and see what you’ve been missing. If you haven’t been in a while, it’s changed, so check them out. Another shocking fact? They have fewer than 2,000 FB fans. Get over to the Art Market Gallery Facebook Page and give them a “like.” You’ll find their website here.