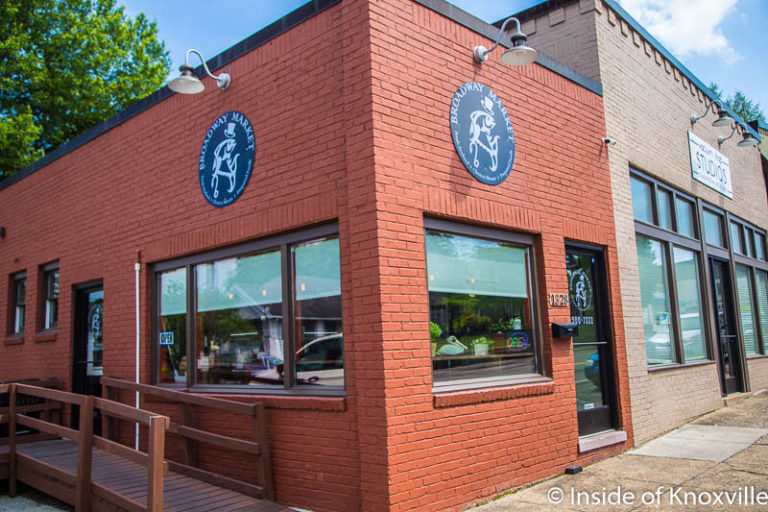 I dropped in a talked to Don and Lauren DeVore to learn more about what they have planned for the Broadway Market, which opened (quietly) last Thursday. The couple has been married twenty-five years and have two children between them, in addition to his two by a previous marriage.

Their journey is a long and winding one. She’s from Knoxville, while he was born in Chattanooga, though his family moved from there when he was young. The two met on the UT campus where he had returned after earning a degree in English Literature some years before, and when Lauren decided to leave school and move to Seattle, he followed.

He’d worked in food service capacities of different sorts since working at a McDonald’s as a teenager, so he quickly scored a couple of jobs, including working as chef at the Soundview Cafe in Seattle’s Pike Place Market. The two lived in a tent for two months until they had the money to rent an apartment.

Deciding to return to Knoxville and get married, the couple began a string of various culinary ventures: In 1994, they opened the Painted Table at the site of the current Baker-Peters Jazz Club, sold it, moved to Charleston where Don became the Sous Chef at Planter’s Inn, helped open another restaurant. They returned to Knoxville where Don worked with his former brother-in-law, running the kitchen at Litton’s.

After deciding he should have a “real” job with benefits and other niceties, he tried the corporate world with Sodexco. He told me he, “hated it.” Initially flying around the country and taking over failing kitchens, he eventually worked for the company at Naples Community Hospital in Boca Grande, Florida, churning out 3,000 to 4,000 meals a day.

After deciding he just wasn’t cut out for a corporate job, the couple returned to Knoxville and opened Sequoyah Hills Cafe and Market at the current site of the Plaid Apron and operated it for five years before selling. The couple moved to Anderson County and raised chickens and cows while he operated the Little Senator restaurant. The restaurant closed during the recession and the couple moved the farm to Blount County where they still have some longhorn cattle.

While there they set up a food truck by the road side and opened Harbor King restaurant at the marina in Friendsville. About a year ago they started the search for a spot where they might open a food business of some sort and they learned the former location of KBrew was available. They loved the visibility of the corner and the fact that much of the infrastructure they would need – triple sinks, grease traps, etc. were already in place. Three weeks later they opened.

They opened the market featuring seafood and prepared dishes. Don, speaking in rapid-fire sentences with heavily salted language, said, “It’s all top shelf. Hell, the price’ll tell you that. Scallops. Not shot full of saline. It’s easier to get good food now than it used to be.”

The menu includes sushi-grade tuna and salmon, shrimp, ready-to-eat roast beef and chicken, thick-cut applewood bacon, Nathan’s hotdogs, salads and cheese. Other available prepared dishes include Lobster cake, seafood chowder, shucked oysters and more. The menu will evolve as they grow and see what customers most want. They can’t have it all, but they include high quality offerings of what customers request.

Settled in, the couple already has thoughts of possibly expanding the space eventually. For now, they’ll focus on a core menu of seafood which Don says is his favorite food to cook. “I’m not compromising what I’m doing. It would be stupid. Take pride in what you do. Like what you do.” Don doesn’t leave folks guessing what he thinks.

The shop is open and slowly gearing up. Lauren set up an Instagram account this weekend and that is their only Internet presence for the moment. A Facebook account and, perhaps, a web page will follow. Stop in and get to know them and sample their food. It’s one of the few places to get high-quality seafood near downtown. I know I’ll be trying it very soon.