An (Not So) Ordinary Couple 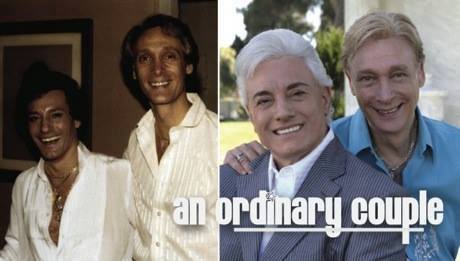 Like many couples, they found each other and fell in love. Unlike so many, their relationship has lasted through the decades as they have pursued happiness together. Along the way, they longed to marry, but could not. They decided if they couldn’t have a marriage ceremony, they would have a joint memorial and unveil their monument. Not exactly ordinary.
Their lives are a history of old Hollywood: Bernardo Puccio was born “Bernard,” but Lana Turner decided he needed an “o” to transform him to a more continental persona. Orin Kennedy was born “Danny Fuchs,” but decided, when moving to Los Angeles for an acting career that never materialized, he preferred to be a Kennedy. Oran was the name of a crush on the east coast.
The two had successful and connected careers in Hollywood. Bernardo, who famously declared he moved to the city with, “I arrived in 1968 with thirteen unmatched suitcases and my poodle,” became a designer to the stars. When Elizabeth Taylor determined to do the first AIDs benefit, she called her friend Bernardo who organized the event and the two developed a friendship based around their love of beautiful jewelry. Orin became a location manager, most famously for David E. Kelly’s productions such as Ally McBeal, The Practice, Chicago Hope, Boston Legal and more. By 2006 when they decided to host their own memorial service and monument unveiling, it was covered by the Los Angeles Times. Famous fashion critic Mr. Blackwell attended and said nothing the couple did surprised him. The ceremony included a film made of the couple’s life together and by the end, guests, including Mr. Blackwell were moved.
The subsequent years have brought many changes for the couple. Gay marriage was legalized and the couple’s relationship became officially and legally recognized. That small video made to commemorate their lives together was developed into a serious biographical documentary directed by Jay Gianukos.
In festival release, it has been recognized as, Official Selection of Outfest, Winner of Audience Award and the Jury Prize at Birmingham Shout Film Festival, Official Selection at Austin Film Festival, Winner of Audience Award at Ft. Lauderdale International Film Festival, Best of Festival at Gulf Coast Film Fest, Official Selection at Cinema Diverse Film Festival and Official Selection at Newfest Film Festival.
The film covers the two men simply trying to live ordinary lives during a time that simple act by gay Americans was difficult and stigmatized. Something as ordinary as the act of going to a gay bar was a crime in the 1950s and 1960s. Even after their memorial service, California’s Proposition 8 codified once more the societal stigma placed on their relationship. Together for over forty years – eight as a legally married couple – and not a particularly political couple, their relationship is their statement. They are proud of their love and of their relationship and wish only to be recognized for such. The L.A. Times article linked above ended the story with a quote from the inimitable Mr. Blackwell, who said of the original footage, “It was a lesson in understanding. I wish we had more of it.”
The couple has agreed that the film, which has not been given a theatrical release until this week, may be used as a fundraiser for Positively Living, a local organization dedicated to the support of people who are HIV positive. (You can hear more about the group via the podcast of my interview with Executive Director, Steve Jenkins.) The connection was made when a friend of the couple, Glo Klasich, approached Gay Lyons, Director of Marketing and Development with the idea of connecting the organization with the couple. Gay met them in Los Angeles and they enthusiastically agreed.
Beyond allowing use of the film, they have agreed to come to Knoxville for the premiere which, in true Hollywood fashion, will include a red carpet. When Positively Living’s headquarters suffered storm damage this spring, the couple informed the organization they would travel at their own expense. When the film is shown Wednesday night at the Bijou, the couple will be on hand and will speak after the showing. All proceeds benefit Positively Living and Gay Lyons pointed out that a debt of gratitude is also due the board of the Bijou and its chair, Marshall Stair, for helping make it possible to hold the event in that grand showcase. Premier Tickets, which were $150 and include reception with Orin & Bernardo, a red-carpet experience, a marquee party on the Bijou stage and box seats for viewing film are sold out. A limited number of Marquee Tickets are available at $75 and these include the red-carpet experience, marquee party on the Bijou stage with Bernardo and Orin, and preferred seating for film viewing. General admission tickets are available at $20 for the film premiere and include the red carpet experience at 8:00 PM and the film at 8:30 PM.
Marquee tickets may be purchased at the Positively Living Website (it’s also linked to the ad for the event to the right of this article). General admission tickets are available directly through the Bijou ticket site (https://knoxbijou.com/ event/?id=700091). If you’d like to win a pair of tickets, send an email to knoxvilleurbanguy@gmail.com with a subject heading, “Ordinary Couple Giveaway.” I’ll select two winners who will each receive a general admission pair. I hope to see you there.