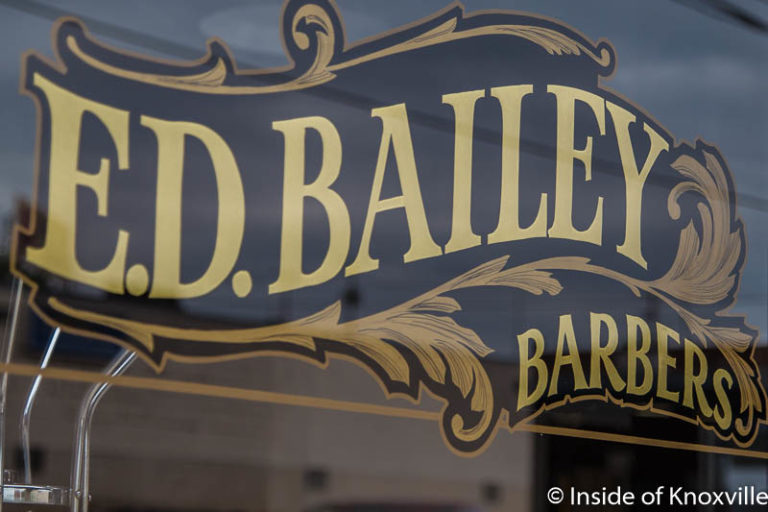 It feels more than a bit like stepping back in time. And that’s exactly what downtown’s newest barber, Zoran Stepanov, has in mind. He loves the style and fashion of men from the 1920s and considers his shop to be a throw-back to a time when men were gentlemen and cared about their appearance, preferred a neat trim and a close shave. He’s opened E.D. Bailey, Barbers at 303 North Central, just across the tracks from the Old City.

His journey to Knoxville has been a long and unique one. While he came to us directly from Chicago, from which he and his wife moved about a year-and-a-half ago, he was born and grew up in Serbia. He describes it as a happy childhood and a time when things were good in his native country. At graduation from high school he was interested in studying dentistry.

His building included a barbershop on the ground floor and while talking to the barbers, they pointed out that the curriculum to be a barber and the preliminary courses to be a dentist – human anatomy and so on – were the same. They pointed out he would gain a skill along the way. It was an important conversation. He followed their advice, got his training as a barber and just as he was poised to enter dental school, the unthinkable happened: civil war erupted in his country and he was drafted into the army.

Pretty confident he neither wanted to shoot his fellow countrymen or be shot by them, he decided to leave the country, getting out just days before the borders were closed. What followed was a number of years in Europe and six years in Israel, generally staying with others who had left Serbia. His skills as a barber ensured him a job wherever he landed. He returned to Serbia twice, thinking it might be better, but found it depressed and economically destroyed by the war.

After working as a television producer in Serbia on his second attempted return, he came to the United States with an American woman he’d met. Their relationship didn’t work out, but he remained in the United States, settling in Chicago, which has a very large Serbian-American population, in 1991. For the entire time he lived in Chicago he worked for Mario’s barbershop. He describes the barbershop world of Chicago as much more extensive than that in Knoxville and pointed out that they kept cold beer for their customers to enjoy – a practice that is specifically illegal in Tennessee.

While in Chicago he met and fell in love with a woman from Ohio who worked at the Art Institute of Chicago. They now have three children, ages eight, four and zero. The newborn has contributed to the slowness of opening the new shop, demanding just a bit of attention recently. The couple grew weary of the pace in Chicago and felt it wasn’t where they wanted to raise their children.

Zoran had been to Knoxville with friends around 2008. They’d ridden their motorcycles to town specifically to ride the Tail of the Dragon. Spending time in Knoxville, he felt it had real potential as a home. It was May, the weather was, “phenomenal, all green.” He said it, “felt like a movie kind of town.” He described the people he met as nicer and friendlier and said, “people have more time in smaller places.”

His wife wasn’t initially interested in Knoxville. They visited Austin, Texas where her twin sister lives, but after ten days there agreed that Austin was in the midst of frenetic development that felt too much like what they wanted to leave behind. They spent a week in Nashville and enjoyed a street fair and lots of great music – Zoran is a drummer – but felt it was, “threatening to become a new Chicago.” They didn’t find it “warm and friendly.”

Back in Chicago, they booked a five day trip to Knoxville, staying in the Holiday Inn on the World’s Fair Park. It rained everyday. It was hot. Zoran worked hard to point out every good quality to his dubious partner. Ultimately, UT provided the impetus to move to the city when his wife got a job there as an Academic Adviser for the honors students. He reports she has grown to love the city.

He’d been thinking about opening his own shop for a decade, but wasn’t sure he wanted to stay in Chicago and knew, if he did open the shop there, he wouldn’t leave. During that time he collected vintage barber chairs (a beautiful 1890s chair sits at the center of his barber stations) and other accouterments you’ll find in the shop. He watched the industry decline and then begin to revive. He thinks more guys are interested in style now than has been true in recent years.

Wanting to make the business a bit unique, he considered pinball machines (too noisy) and foosball tables (too complicated, multiple players required) and settled on pool tables as a classy way to pass the time while waiting on a cut – or just to drop in for a game. He’s starting the shop as the only barber, though he hopes the business does well enough to expand. If it does, he may need the space currently occupied by the pool table. He hand-stenciled the gold designs you see on the walls and has vintage barber equipment on display. He’s proud to be a part of the profession that he describes as part art and part craft.

He’s offering hair cuts, shaves and beard trims – just like you would have found in a previous era. This includes pre-shave oil rubbed into the face and the hot towels barbers used in the past. Cuts are $19. At the moment, there is no working Facebook or webpage, but you can call for an appointment at 865-500-7051. Old school, right? You also may get lucky if you drop in. He’ll be open starting Tuesday with initial hours running 9:00 AM – 5:00 PM Tuesday through Saturday. He hopes to expand to seven days a week and longer hours as business grows.

As a final thought, I asked him about the name of the shop. He said as he considered a gentleman’s shop, he thought about who he considered to be the kind of gentleman he had in mind. He thought of his father-in-law, E.D. Bailey and decided he would name the shop in tribute to him. As fate would have it, I learned this while Mr. Bailey was at the shop and he obliged me with a photo looking very much like the gentleman he is purported to be. He said he was very honored to have the shop named after him.

Stop in and welcome Zoran to downtown. If you’re lucky you might run in to Mr. Bailey who will likely be visiting the city and those three grandchildren pretty often.