Knoxville is Growing. How Do We Ensure the Growth is Smart? 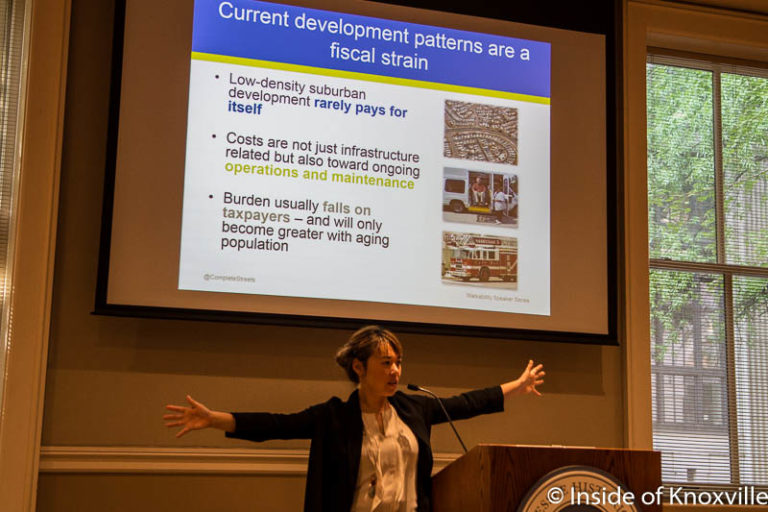 It’s easy to rattle off the various development projects recently completed, underway or planned in Knoxville and, particularly, in downtown Knoxville. We’re growing. Whether by our own design or simply by being the right kind of place at the right time, progress is happening. It begs several questions, however: Is all growth good? Is all growth smart? How do we tell the difference between good growth and something less? How do we ensure we have more of the good, smart kind?

Knoxville, Chattanooga and Nashville recently applied for and won a national award via Smart Growth America and its subsidiary National Complete Streets Coalition. The award carries with it technical support in the form of workshops for how to implement smart growth policies. Each of the three cities will receive three workshops tailored to each city involved.

The awards came with an acknowledgement that each of the cities has already made progress in pursuing the goals of smart growth and complete streets. “This award is a testament to the hard work that’s already happening in these communities,” said John Robert Smith, Senior Policy Advisor at Smart Growth America. “Our program was very competitive and each of our winners should be very proud to be included. We’re excited to help them continue on to the next stage of this work.”

While the approach in each case will be tailored to the specific strengths and challenges of each city in the cause of advancing, “economic, health, and community vibrancy goals,” a focus will also be maintained on grow the cities’ collaboration with each other. “Discussions will focus on how to create a safe and inviting transportation network for everyone in the community, including bicyclists, drivers, transit operators and users, and pedestrians of all ages and abilities. Each of the three participants will create a Complete Streets implementation plan as part of the workshop outcomes.”

“A region can’t thrive if some people are struggling just to get to the grocery store,” said Emiko Atherton, Director of the National Complete Streets Coalition, a program of Smart Growth America. “A lot of times, overcoming that challenge takes regional cooperation. This workshop series is the first time we’ve brought together multiple entities to collaborate on Complete Streets. We’re really excited to see what they can accomplish together.”

Ms. Atherton was in town last week as a preliminary step in launching the project. She’s just getting to know us, but she got a nice taste of what we’ve got going. She attended Jazz on the Square last Tuesday night and walked through the Market Square Farmers’ Market on Wednesday morning. She had nice things to say from her brief introduction to the city, but also sounded cautionary notes.

If you don’t already, I’d encourage you to follow both @SmartGrowthUSA and @completestreets on Twitter. I do, and it is often through their links that I find the articles I respond to on this blog. I’d also ask that you consider looking for upcoming sessions on walkability (there’s one June 6, 6PM @ Central United Methodist) and the future sessions generated by the award. All are open to the public and the issues will determine what kind of city we’ll become in the coming decades.

Ms. Atherton, in her sessions last week, made a number of helpful points. She encouraged cities to consider the Return on Investment which, as she noted, is much higher in mixed use development. She summed up the goal of her work as ensuring, “transportation and housing choices near jobs, shops and schools.” She encouraged cities to, “build economic strength by reducing public spending on infrastructure.” It sounds counter-intuitive for someone who supports mass transit, but she pointed out that single use zoning and sprawl massively increase infrastructure spending over time and should be avoided.

While acknowledging that there are two very different groups driving our various markets – millennials and baby-boomers – she pointed out that each of them share some very similar goals. While millennials are split on the type of area they prefer (40% want a city or suburb with mixed use, 40% prefer a small town and 12% prefer single use zoned suburbs), they share a common ethic (88%) in valuing the quality of the neighborhood over the size of the house.

As a support she offered that 64% looked for a job after choosing a city. That reversal of sequence from previous generations is reflected in a similar reversal with industries which are now following the talent as opposed to assuming the talent will come to them. She pointed out that dense development is less expensive on the front end, less expensive to maintain and generates more tax dollars per acre, as we’ve previously discussed, saying there is a 38% savings with density.

She also pointed out that successful cities are capitalizing on genuine qualities they possess as people search for authentic places. Nashville, for example, is capitalizing on its “cool” factor with the music industry and they currently rank 3rd in the country for economic development. Tellingly, they have, “Nashville Next,” a twenty-five year development plan.

Greenville, South Carolina, where our city administrators are currently set to spend several days, have focused on building their main street. She noted that their growth has been very purposeful and planned, they’ve activated their riverfront and they have demanded a mix of affordable housing from their developers. The payoff? 250 international firms from 26 countries call Greenville “home.”

She also made a compelling point that at one time, to be successful, a city needed a river. Later it was a railroad and even later, it was access to an Interstate highway. The current necessity is high speed broadband, such as that Chattanooga and other cities have embraced.

The upshot is that we are building the city our children and grandchildren will inherit. Will it make them proud of our efforts or will we saddle them with crumbling structures never built to last? Will we leave them with a sustainable infrastructure? Will they inherit a city built for everyone or built for the able-bodied and wealthy? It’s up to us, but realize we are making that choice every day. Get informed and get involved in order to lend your hand to making Knoxville a great city in the future.