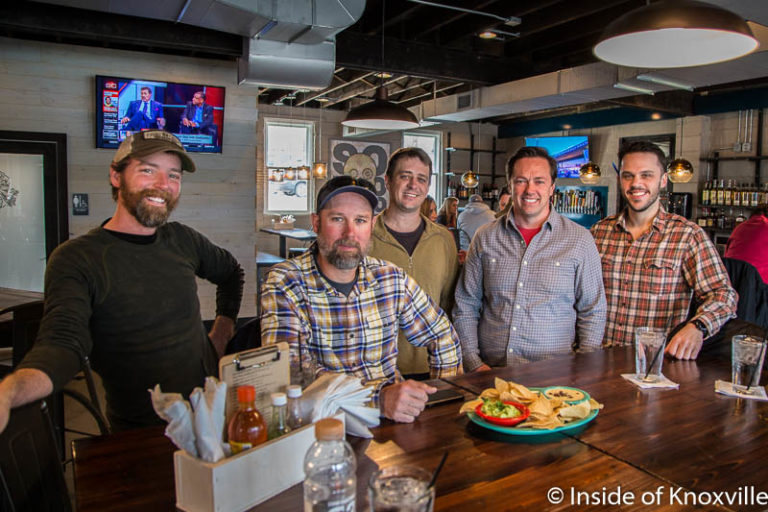 SoKno Taco Cantina opened two weeks ago at 3701 Sevierville Pike. It’s just past the end of the James White Parkway (turn left at the end and you are there). It’s near several Knoxville landmarks. The Round-Up Restaurant, a south Knoxville institution for at least four decades, was already revered when I lived at 3716 Sevierville Pike from 1983 – 1990. Of course, the most talked about neighbor is just a block away at the Baker Creek Preserve, with bike and walking trails and a connection to the Urban Wilderness. It’s a spot poised for major growth because of its access to the trails.

The building is owned by Brian Hann, Mary Beth Tugwell, Jason Stephens and Diane Reynolds. The four purchased it about four years ago with the idea that the area was poised to grow and, as residents of south Knoxville, they wanted to be participants in that growth. Forrest Kirkpatrick, who I mentioned last week as architect for the project at 107 Commerce, served as architect, joining the project two years ago and overseeing the administration of a city facade grant. Building co-owner Jason, also did the build-out.

The idea behind the construction was flexible use. It had been, among other things, a television repair shop, a barber shop and a French antique market of some sort. Brian had purchased various pieces of property to donate as use for trailheads to the Urban Wilderness. He also simply wanted a cool place to eat near his house and the trails. His mother met Bryan Howington (Howie), owner of Central Flats and Taps, at a party and told him he should talk to her son about opening a restaurant in the building.

Howington had opened Central Flats and Taps in March 2012 after a chance meeting with Daniel Schuh, owner of Relix Theatre. Prior to that, he had opened Holy Taco Cantina in Johson City. By last year he was looking to take on another project and soon agreed to lease the beautifully refurbished 1701 Sevierville Pike building. The group worked together to make it the restaurant which opened recently. Chefs Matt and Billy Petro came from Central Flats and Taps and are partners in the business. Manager, Ryan Steffy, says the response has been great. He appreciates the unique community and he feels their neighbors are truly glad to have them. As if planted for evidence, a young neighbor boy, Ethan, who is probably ten or twelve-years-old, approached the table several times to talk to his new friend, Howie, about his new Go-Pro camera and his recent biking adventures. They met on the nearby trails.

The food is prepared fresh from scratch everyday, with an emphasis on, good food, well prepared, at blue-collar prices.” Howie said, “Margaritas and tacos are in high demand in south Knoxville.” Ryan chimed in to report that the news letter for Altos Tequila, the brand they use for their drinks, had highlighted the brand new restaurant in their latest newsletter, under the caption, “What’s Happening in South Knoxville?” Howie later added that preparing their own salsas and seasonings, “is labor intensive like it should be.”

Margaritas are mixed in the kitchen and available on tap, or from the frozen margarita machine, along with twenty-four beers. The emphasis on beer is craft beers with a local or regional connection or with a Mexican or Mexican-American connection. The menu contains tacos, tamales and burritos along with salads. I had the shrimp tacos, which were included in the lunch special, and they were delicious. Ryan noted that gluten-free an vegan options are available. A kid’s menu is also available and the group emphasized the restaurant is very kid-friendly.

The decor is simple, but very well done. Forrest said they wanted to touch the building as lightly as possible, though that involved replacing cement floors in the portion of the building that had floors. The concrete which was removed, was shifted outside and used to construct a retaining wall, saving landfill space and money. A roof was added to the second floor with structurally insulated panels. The interior rooms were further connected and restrooms and a cooler were added. The interior features 120 seats.

Many of the features found inside were made locally. The beautiful door separating the rooms was made during construction. The metal in the restrooms and elsewhere was made by Bently Bracket of south Knoxville. Cherokee Porcelain at the Forks of the River manufactured the striking bar top of enameled steel.

The exterior modifications are also impressive. Outdoor seating, not something generally seen in south Knoxville, lines two sides of the building, accommodating up to 65 additional customers. Parallel parking was added and a sidewalk was constructed. Landscaping will soon be added, as well as a flagstone area with lounge chairs. Bike racks are provided and a bike-washing area is planned. The group felt strongly about the sidewalks, though they do not connect to other sidewalks, as there are none in the area. Neighbors have begun mentioning the absence of sidewalks elsewhere, so they may have started something.

The initial response has been so strong they have filled the restaurant at dinner and have run out of food most of their first days. Howie said, “We were staffed for a normal restaurant opening and that wasn’t enough.” They are now up to thirty-five employees (ten more than Central Flats and Taps), a number of whom have come from the immediate area and bike or walk to work.

You’ll find a larger version of the menu pictured here at the SnKno Taco website and you’ll want to follow the business at their Facebook page (and give them a “like.” Their hours are from 11:00 AM to 1:00 AM Sunday through Wednesday and 11:00 AM to 2:00 AM Thursday through Saturday. The kitchen is closed after 10:00 PM on weekdays and 11:00 PM on weekends.