A Downtown Business is Sold and Changes Its Name 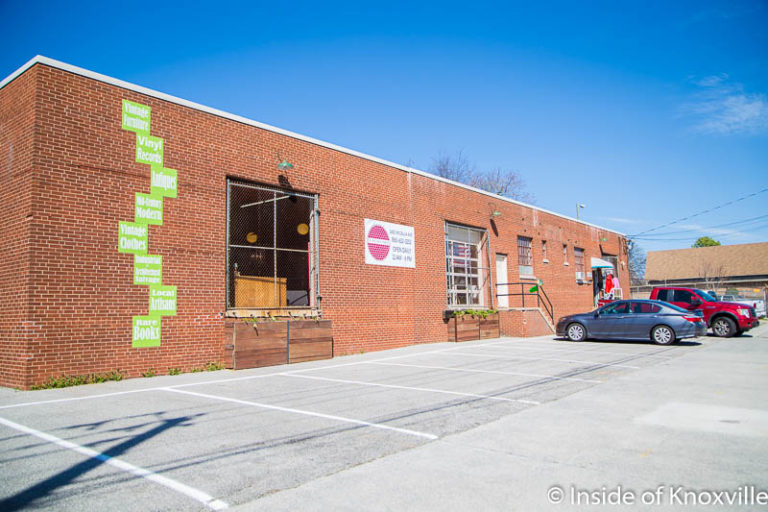 I recently was asked if I was aware of The Red Brick Market, located oat 1401 McCalla. I wasn’t, so I made it a point to drop in. What I found was a business which I knew by another name. It’s also a business that is undergoing additional changes. Formerly Nostalgia on McCalla, owner Jeff Bolin sold it to three of the vendors, who have changed the name and have begun to shift the focus.

I met Jeana Vaughn who, along with Esmeralda Carmicahael and Dana Traylor, purchased the business January 1. Renaming it The Red Brick Market, the trio has set to expand its focus. While continuing the mid-century modern and industrial themes customers have come to expect, you’ll now find shabby-chic and eclectic styles. The group is also adding a focus on local artisans with locally made, hand-crafted candles, leather and stained-glass products. She also says more antiques are on the way.

Jeana says she caught the collecting bug when, as a child, she had a boy in her neighborhood who was confined to a wheelchair. She volunteered to push him up and down the street and each time she did so, his mother would give her a “treasure.” Even though her mother said the lady was just getting rid of her junk, Jeana loved her collection. The relationship waned when the young man got a motorized wheelchair and would take her for rides, but the compulsion to collect persisted.

She says she finds great joy in finding something someone no longer wants and, realizing someone else would want just that, she helps get the item to the right person. She also gets a secondary satisfaction at knowing she kept something from going to a landfill. She insists, “there is always a use.” She enjoys cleaning and repairing items, considering the activity a form of upcycling. The business also takes some items on consignment and she enjoys knowing that she’s helped people who wouldn’t have the time or resources to do so themselves, find the right next owner for their possession.

The business opened in December 2012 and Jeana came on board a couple of months later. The business, she says, has done well from the beginning and they are excited about having more input on the direction and hope to see it continue its success. Esmeralda, who focuses on mid-century modern has been a part of the business from the beginning, while Dana, who looks for modern pieces, joined up about a year ago.

Jeana actually debated purchasing the business as long as a couple of years ago, though at that time she would have been forced to move it to another location as the former owner had a different idea for the current location. That didn’t happen and when the discussion was renewed recently, she agreed to the purchase only if they could remain at the same address. Her grandparents lived in Burlington and she feels a connection to the area. She also pointed out the numerous advantages to the building for a business like theirs: ample parking, a side courtyard which they have put to good use and a loading dock which is very helpful for larger pieces.

She had to re-evaluate another long-term ideal she’d held: She said she would never operate a business in a building she didn’t own. She changed her mind as she got to know building owners Ken Stark and Nancy Voith. Jeana said, “You just know good people when you meet them,” and they’ve been great to work with. She also handed me a flyer she keeps on hand for directing people to other businesses which might be considered competitors: Nostalgia, Four Seasons Vintage, Coldstream Market, Pop Weasel, Mid Mod Collective, Architectural Antics, The Knox Heritage Salvage Shop and Retrospect. It confirmed in my mind what she’d just said: You just know it when you meet good people.

As I left they were making way for a selection of prom dresses – something they would not likely have stocked before – and I inspected the vintage shipment of vintage barnwood they’d just gotten in. Jeana said we can expect summer outdoor markets with bands and food trucks, plus additional dealers in the coming months. First Fridays will continue to be a big celebration and they have booths available from $50. Check out their Facebook Page (and give them a “like”), and follow them on Instagram to see the most recent additions and special events.