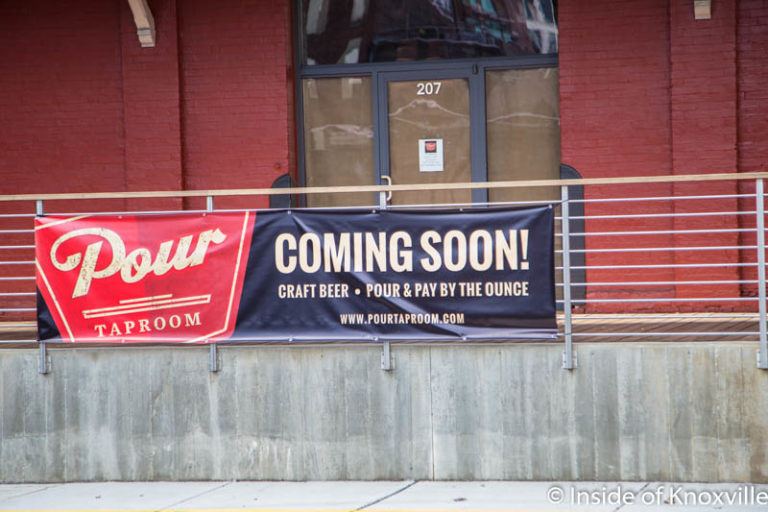 Jackson Terminal in the Old City, after what seemed an extended period, is rapidly filling. All Occasion Catering took one end. Post Modern Spirits announced last December their plans to take up residence there. Now comes word that Pour Taproom is coming very soon. I spoke with Joel McLead who, along with his wife Mariah, and friends Sam Natour and Caitlin Riley, owns the new venture.

Founded and franchised by Nate Tomforde in Asheville, there are currently three Pour locations, one each in Asheville, Greenville and Santa Cruz, with more soon to open. Of this location, Joel said the target date to open is May 1st, and he hopes it will be the first location of several he plans for Knoxville.

It’s an unusual concept: self-serve beer and other beverages. I confessed I could not imagine how that might work. He said you get a scan ID when you walk in and you set up a tab. Each patron is given a bracelet that has their credit card information and runs a tab. The bracelet includes a chip that allows the tap to dispense the beverage.

The patron can get a sip, a full glass or anything in between and, so, try a variety of beers or focus on one they know they like. The tab is continuously updated and patrons pay before they leave. The chips only allow two pints before requiring a reset with an attendant, which is a way of checking in with patrons, much as a bartender would do, to make sure they aren’t over-consuming.

The place will have sixty-eight taps. While I assume plans may shift a bit, the current planned allocation of those taps calls for one tap of craft soda and one for water. Fifty will be devoted to craft beers, eight to gluten-free options like cider and mead, eight will be devoted to wine (four reds and four whites).

Joel has been interested in beer for years, having attended beer school and home-brewed over the years. He also worked all phases of the service industry from washing dishes as a teen to working at some of the best-branded hotels. As he noted, eventually, “everyone wants to be the guy at the top.” Living in Asheville, he knew Nate and watched the success of the first Pour. Sam was living in Asheville, as well, at the time and the two concluded that Knoxville, Sam’s home, would be a good fit for a new location. He said it feels like Asheville ten years ago in terms of its craft beer scene.

The Jackson Terminal space was the first they looked at and, though they looked a couple of other places before they signed a lease, they knew that was the spot. He said they’d had a picture in their minds of the perfect kind of spot, “with exposed bricks and beams,” and found exactly what they had imagined there.

They are taking two contiguous addresses, 207 and 209, which will give them right around 2500 square feet inside and they’ll have about five  hundred square feet of the boardwalk for their use. Inside you’ll find communal tables, as well as two and four-seat tables, and couches. No conventional bar is required and beyond painting and placing the taps, Edison-type lighting, a counter at the entrance and the furniture, there is little to the build-out, which is why they are hoping for such a quick opening.

While the decision regarding hours is still fluid, they are considering opening from 11:00 AM to 11:00 PM and/or Noon to Midnight. He said those hours would be expanded or reduced depending on the flow of customers. They are “currently working on a menu with All Occasions Catering and should have salads, sandwiches, and small bites available.”