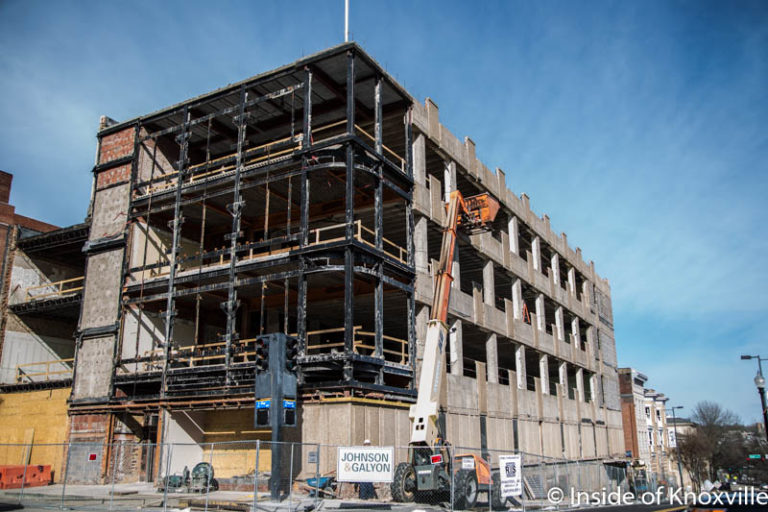 At least a couple of times a week someone asks about one project or another, wanting updated information. Often the request comes because of an apparent lack of progress. Projects have certainly died on the vine in the past – like the oft cited Sentinel Tower, which may have never been a serious project – but usually optimistic developers and investors hope for an earlier finish date than is actually possible. Sometimes the delays are typical and sometimes they are unusual, but nearly every project has them. Here are updates on a few I’ve been asked about recently.

Keener Lighting Building (701 World’s Fair Park): A number of you have your eye on this property which was purchased by Dewhirst Properties last year. It’s an attractive building with a lot of potential. I’ve seen activity there recently and some of you mentioned the same and asked what’s going on. I spoke to Mark Heinz who said the activity currently underway relates to the facade only. The group received a facade grant from the city and they are implementing the improvements. The wooden windows are rotten and brick and stone are falling off. The group is also replacing the store front. No definitive plans have been made for the building and he added that the same is true for the First Christian Church Building and Kern’s Bakery.

The Crozier (Corner of Willow and Central): My most recent update was to give you details on the new design. It seems like a long time since I first wrote about the plans, back in November 2015. The project ran into delays with the realization that additional work would need to be completed beneath ground level to support the building. With that realization and the understanding of what would be required, came the idea to utilize the changes to incorporate a basement and an additional floor. The biggest news is evident in the photograph, which is about a week old: the structure has emerged from the ground. One of the partners in the development, Daniel Smith says there should be a website, soon, to market the condos, and the current expected completion date is December.

Former KUB Building/Tombras Building (Corner of Gay and Church): I don’t have any inside information here, I just wanted to post a photograph of the work, so far. It’s remarkable to see an older building stripped to its bones. Various layers of the different renditions of the building have been removed, preparing it for the building it is to become. As quickly as this phase has gone, it’s clear this project is moving rapidly.

Merchants of Beer (Corner of Summit and Central): I spoke to Henry Sadiq, a partner in the project that has seemed to go nowhere for months. The initial projected opening date was last fall for the project I first described here. It is still on track and, according to Mr. Sadiq, “Unforeseen delays in design review and permitting combined with the time of year influenced our decision to revise our opening timeline. Good news is that, yes, the project is underway and we are aggressively pushing for a March opening.” He went on to say details would soon be forthcoming for readers of this blog.

Courtyard and Residence Inn by Marriott (Corner of Church and State): This project, which I detailed last May, has been the subject of much speculation and not a little skepticism. I spoke to Rick Blackburn who will serve as Owner’s Project Manager. He said the work people have recently noticed there is, indeed, the preliminary work to prepare the site. They’ve installed erosion and silt control and grading has started. An official groundbreaking will be held later in the spring when there’s a better chance of good weather. Construction is expected to last about eighteen months, beginning now, so completion should hit sometime in the fourth quarter of 2018.

Two small additional bits: Regas Square Condos (corner of Depot and Gay) has a groundbreaking ceremony next week and sales of condos are underway and strong. The Knoxville High School project is also moving forward. A lengthy delay involving windows has been resolved. The National Park Service would only allow window replacements if they were identical and nothing like them are currently manufactured. Ultimately, the decision was made to repair versus replace.

I hope that answers some of your questions. I’ll bring more detail as I have it. Are there other projects you’d like to see updated? Let me know and I’ll see what I can find.