Can We Talk About Lady Parts? 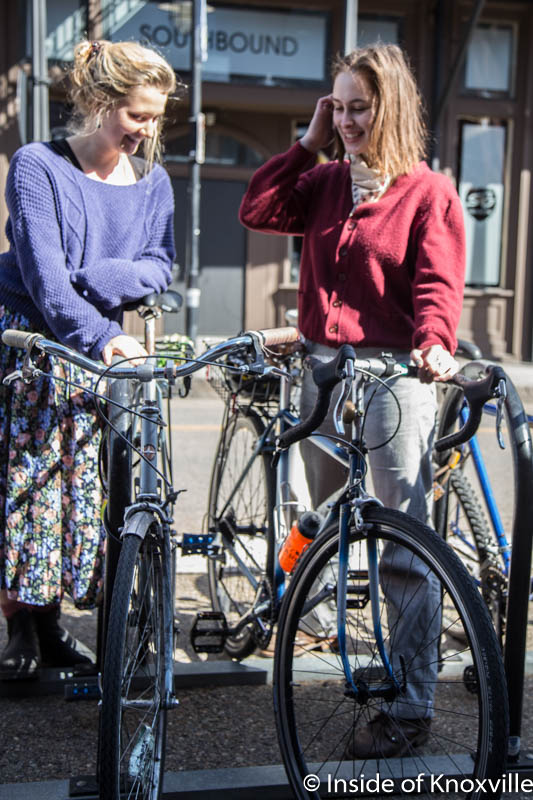 UT seniors Sasha Reed and Zara Saponja have a different meaning in mind for the phrase they’ve chosen as the name for their new series of bicycle maintenance classes for women. They are on a mission to grow the ranks of women who are confident not only cycling, but also in basic bicycle maintenance and repair. And the two plan to have a lot of fun along the way.

We recently met over coffee to talk about the effort and the two good friends laughed and finished each other’s thoughts throughout the hour. They met in an art class as freshmen, quickly forming a close friendship. Both were cyclists, but it wasn’t until traveling abroad during their junior year that the idea for Lady Parts began to take shape. During their senior year they’ve made it happen.

Zara studied abroad for a year in Prague and Ireland, while Sasha studied for a semester in Stockholm. While traveling in Europe, Sasha found a “bicycle kitchen,” which she says probably isn’t an accurate translation, but one she likes. She’d always biked, so she spent some time working at the bicycle shop. Zara, meanwhile, biked with a group across Ireland and France, making necessary repairs along the way and said a bias among the males was often present when it came to bike repair.

Zara, from Vienna, Virginia is finishing her degree with a dual focus in global studies and film. She hopes to eventually be involved in the production of human rights documentaries. It was her father who introduced her into the world of cycling. They lived about forty miles out of D.C. and biked into the city, a time she remembers fondly. She said she fell in love with biking everywhere to explore. She likes that it is slow enough to see what’s passing by, but fast enough to actually arrive at a destination by the end of the day.

Sasha, originally from Nashville, is finishing her degree in sustainability. Zara says exuberantly, “She’s the best mechanic!” She had an extensive history with repair before her European adventure. She’d worked in the UT Bike Center helping maintain the fleet of mountain and street bikes available to students. It’s a job she continued until recently. She has also worked at Tennessee Valley Bikes and in Nashville for Halcyon Bike Shop. I’ve mentioned the shop before – Mitchell Connell of DreamBikes also worked for them – and the two attended the same high school and are friends from their Nashville days.

She’d started riding her bike to high school. It was a cheap bike which was followed by another inexpensive bike someone gave her. She says it broke often, so she took it to Halcyon and started doing repairs there. She loved the work and followed the repairs with buying accessories to make the bike better. She was hooked.

The two communicated during their time abroad and compared, among other things, their cycling experiences and they began to hatch a plan to encourage female cyclists. When they returned they began to meet to discuss the possibilities. “Lady Parts,” came up as a joke which quickly became the name of their serious endeavor. Deciding they did not want to talk the idea to death, they quickly made a poster which included doodles from each of them (and one misspelled word they decided to keep), added a Lady Parts Facebook Page and a Lady Parts Instagram account and spread posters around campus and Fort Sanders advertising their first class.

The first class was held last October in Zara’s front yard in Fort Sanders and about a half-dozen girls showed up. By the next class it was colder and dark earlier, so they moved the class into the foyer of the old, sub-divided home where Zara lives. Bikes and tools all piled neatly inside, the second class drew about as many as the first. By the end of the semester they’d held four classes and began making plans for the spring semester.

The classes will continue to be free with both young women donating their time and they are very excited to have been invited to hold the classes in the DreamBikes facility on Central Street. The next class is a week from today on Tuesday, February 21 at 7:30. The topic of the first class will be “Basic Care.” Classes will follow every two weeks for four additional classes with topics including “Flat Change,” “Brakes,” “Shifting,” and one TBA.

The ladies say since completing the classes in the fall and finding such a great facility, interest has skyrocketed from about 20 “interested” on Facebook to about 150. They are excited to be joined in some of the classes by one of the young mechanics from the DreamBikes program and they are planning rides which will be announced on the Facebook Page, saying the rides are usually leisurely and intended for all levels. So far the rides have centered around downtown Knoxville and beer.

While they are serious about cycling and bike repair, they say they also inject a bit of fun into everything they do, recounting their Halloween ride in costume and their holiday ride in “funky sweaters.” Expect more fun from these two, but expect more women cyclists as they recruit and train them, one class at a time. “Like” their Facebook page to encourage their efforts and check out the complete list of scheduled events there. They may not be from here originally, but they are now ours and they are making Knoxville a better place.