A Weekend Rich in Diverse Entertainment 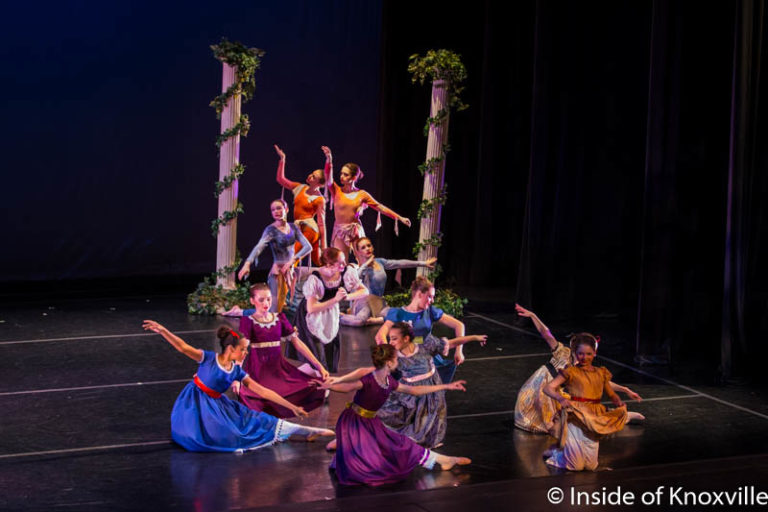 We entered the weekend fresh off the excellent performance of La Bohème by Knoxville Opera. Urban Girl’s first opera, it set a high bar. With various rounds of illness and school closings, Urban Girl got to continue her run of cool shows as she tagged along with Urban Woman and myself.

The first round of cool entertainment came at the, perhaps unexpected, Union Avenue Books on Friday night. First time novelist Lydia Peelle read from her new book, The Midnight Cool, which would be cool enough, but she was accompanied by Ketch Secor of Old Crow Medicine show which turned the reading into more of an event. The novel, set in World War I – and enthusiastically endorsed by Union Ave. owner Flossie McNabb – includes large helpings of music related to the war and Ketch sang and performed a number of these on a a hybrid guitar and banjo.

We kept the evening moving with our first concert at Modern Studio. Opener Eli Fox should be familiar to long-time readers of this blog as one of the forces (the one playing banjo) in Subtle Clutch. Long gone solo, now, Eli, at seventeen-years-old is an accomplished multi-instrumentalist. After his excellent set, Jubal stepped onto stage and gave a strong performance of their intense repertoire. Continuing to grow and develop as artists, the show was a very good one, sprinkled with strong material from an upcoming (April) CD. It’s exciting to watch these artists grow and develop.

Saturday night found Urban Girl back in the downtown groove and headed for our second consecutive show at Modern Studio. It was her first ticketed concert and she informed me on the way, “Mojo, you know I’m not really into music.” It would have been hard to prove that judging from her swaying, clapping and laughing during Count This Penny’s excellent show. She insisted on meeting them before we left and conceded on the way home that they were funny. Veteran performers, Allen and Amanda Rigell (Count This Penny), continue to get better with beautifully crafted songs and increasingly assured vocals. They are easily one of my favorite groups.

A word on the venue is in order. Comfortable chairs sit in front of a small, portable stage. Improvised lighting points in that direction and the space has a semi-finished feel. The sound is perfect, which seems a major accomplishment given the warehouse-like space. A few tables are available on the sides and the shows are BYOB. Presented by promoter Kent Oglesby, the shows are intended to be listening experiences and the audiences both nights respected that. It was a pleasure to be in a crowd listening to music and not hearing anyone talking through the songs. Sunday morning we hit the ground running with the Knoxcentric radio show on WUTK, 90.3 at 10:00 AM. I had the privilege of interviewing Sean McCollough and Steph Gunnoe, the driving forces behind local band The Lonetones. We played a number of cuts from their new CD, “Dumbing It All Down,” most being heard publicly for the first time. The songs, at once intimate and universal, pick up where “Modern Victims” left off, though with added textures. Top local musicians joined the effort, with stand-out artists like Jamie Cook on drums, Cecilia Miller Wright on cello and Will Boyd sitting in on saxophone.

“Modern Victims” was on constant rotation for me for months and I expect the same from the new recording. You’ll be able to secure it at some local outlets, soon, and it will also be available for download at the usual places. Check the Lonetones website for availability. A CD release party this Saturday night at the Open Chord offers a chance to hear the songs with a full band, just as you’ll find them on the record. $5 gets you in, but $10 gets you in and you’ll walk out with the new disk. Hopefully, I’ll have the podcast up soon so you can hear both the interview and some of the new material.

After having fun on the radio with those guys, we re-grouped at the house for a while before walking to the Bijou for the final installment in a great run of diverse entertainment: Go! Contemporary Dance Works‘ production of “Barbarosa.” Urban Girl digs pirates and takes dance, so it was an easy call. We’d enjoyed their production of Tata Ajache, which I wrote about a couple of years ago, so we were excited to see the new production.

I hope a number of you had a chance to see “Barbarosa,” this weekend. It was everything we’d imagined it might be. A story told completely through dance, the narrative follows Barbarosa, a young girl who didn’t fit the constraints of her lofty upbringing. Ultimately, her alternative perspective led her to take up the life of a pirate. Harper Addison danced the role of Anne Bonny, the true-life pirate on which the production is based.  Led by her dancing, the performances were uniformly excellent.

An acknowledgment of Lisa Hill McKee and the other choreographers is a must as these productions are challenging and innovative from beginning to end. The colors, the movement, the costumes, the story and, of course, the dancing are compelling, but it is the choreography that leaves me bewildered every time. It’s hard for me to imagine developing scenes and choreography to tell a complete story and it is done here impeccably. Watch their website for announcements of future programs and attend a performance. You’ll be pleased you did.

That left us one Tomato Head pizza shy of a perfect weekend. It’s a dizzying array of cultural possibilities we’re presented with in our city. We need to be cognizant of what is offered and support these efforts when we can. I think about what Urban Girl has been exposed to because of our connection to downtown artists and other groups and I’m very grateful.