Jody Collins: A Feral Giant Bringing Graphic Arts and Kindness to the City 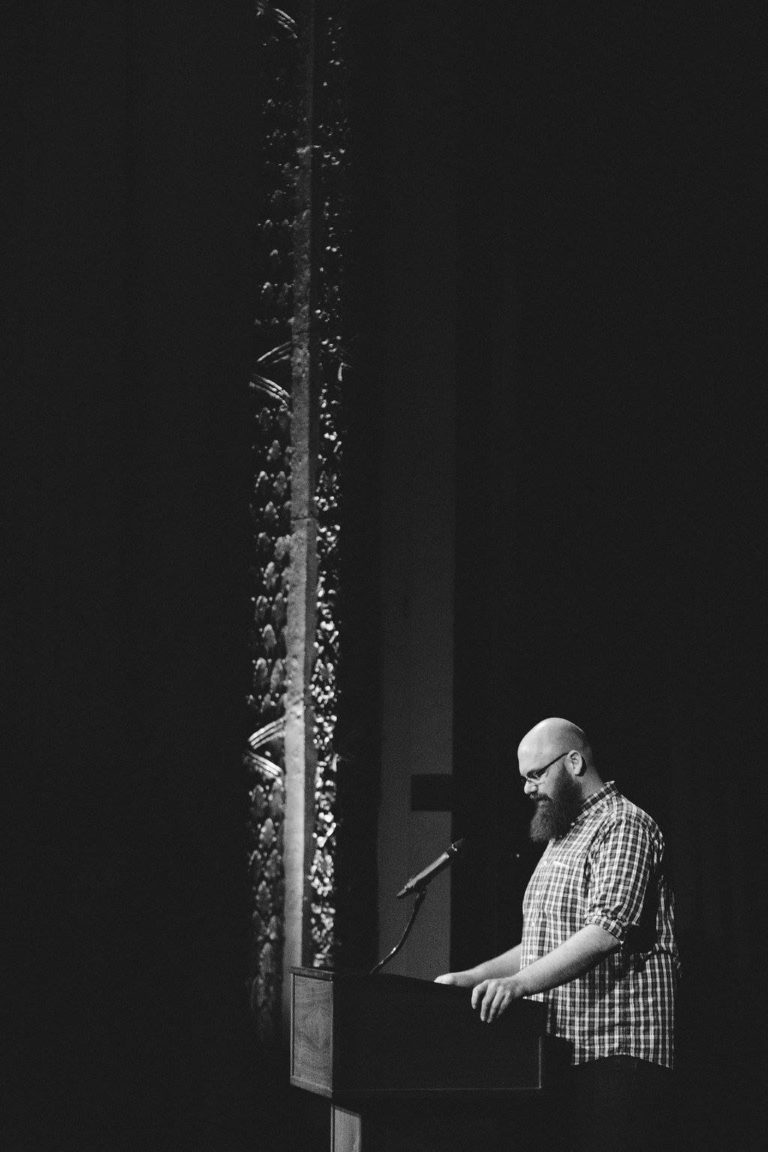 It’s hard to miss Jody Collins around downtown. He towers over the room with his shaved pate and his sterling beard. He doesn’t have a booming voice, so much, his voice is more gentle than not, but his gentle humility is striking. We’d agreed to meet at Old City Java and he ran late. He slid into his chair, explaining about a lack of sleep and then groaned as he remember something else that had slipped his mind: Postcards.

“I’m supposed to send one every day,” he said.

It turns out that was a his personal commitment for the new year – to send a postcard including one of his personalized doodles – to a different person every day of the year. He wanted to send them to children in the hospital, but was told HIPPA would prevent it, so he’s picking from the people he knows. That day it was for the daughter of a friend. Last year the goal was to do a good deed every day, though he failed: he did 501 that he recorded in his notebook, but missed some days. Another year it was to read 96 books, and he read 108. He sets a goal every year. My head was spinning and we hadn’t started the interview.

Jody, born and raised in Knoxville has always lived within a five square mile area, mostly around north Knoxville. He graduated from Fulton High School where he worked with graphic arts in the print shop, because it allowed him to get his hands on one of the only two computers in the school and he knew his future was with computers. He loved it and was teaching the freshman course by the time he was a senior and continued his studies at Pellissippi. He still speaks fondly of the aptly named, Mr. Miracle, his teacher at Fulton. He’s currently teaching a class on graphic arts to 10-to-13-year-olds at the Basement Community Art Studio. I expressed my surprise that such young students could learn graphic arts and asked why he does it. He said he’s always enjoyed not only doing graphic arts, but teaching it to others, especially children. Pointing around the room at examples, he noted that our world is dominated by graphics. He’s teaching them hand lettering , layout and more. Later he plans to offer a more advanced class for students aged 13 – 18. He also returns to Fulton and works with students there.

After Pellissippi he held a range of jobs. He wrote and laid out washing machine manuals, was self-employed as a print broker, did the graphics for “Home Tour,” a real estate publication. He worked for the UT Orange Pages, a monthly real estate guide and for a company that printed flyers and brochures for non-profits, political campaigns and commercial clients. In 2006 and 2007 he published six issues of an arts and entertainment magazine. He worked in advertising for the News Sentinel for a year and continued for them in “marketing and special publications,” for a couple of years. He followed that by working for Pet Safe for five years re-branding all their channels down to the details of packaging. Most recently he worked for Scripps, which merged with Journal Communications and was ultimately purchased by Gannett. While there he did brand marketing for fourteen papers. When Gannett purchased them, the end was near. They had their own staff and he, along with others, were let go.

He laughed about the laundry list of jobs, but said he looked at each of them as a lesson to take forward. He added he’d always done work for non-profits, as well, helping United Way with their social media in 2008, which led to stints on over 20 non-profit boards just long enough to give them the social media help they needed. All these experiences have culminated in the formation of his own company, Feral Giant. He offers design, illustration and social media consultation. You’ve seen some of his work popping up around downtown. There are some samples on this page; the art for a holiday event at The Central Collective, the poster for the recent “Shelter from the Storm,” concert and another from the upcoming Pecha Kucha (2/16 at the Mill and Mine – Don’t miss it!) I, personally, love the work on that particular poster.

He’s got a show coming up called “#cloudporn,” at The Central Collective in July, which focuses, as you might expect, on clouds. He’s also quite adept at videography and that’s where I’ll leave you. The video below won second at one of the Seven-Day-Shoot outs. After his initial idea fell apart, he put this together in two days. Take a look, watch for Jody and tell him you read this and give his Feral Giant venture a look.