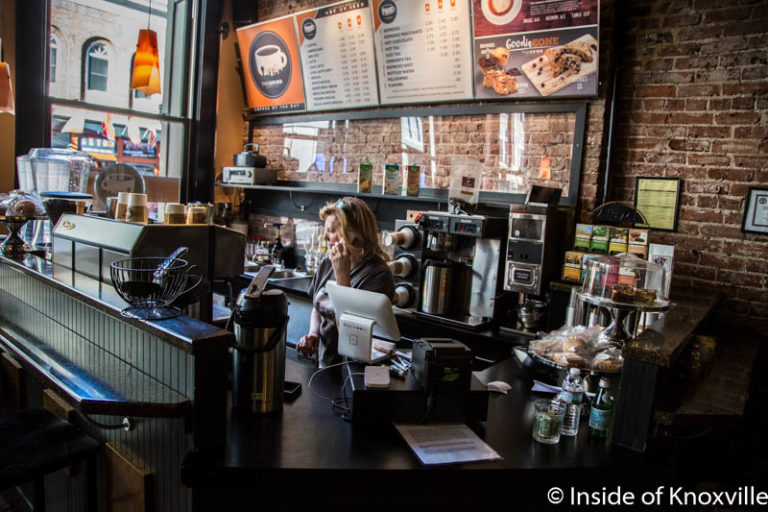 In 2004 downtown Knoxville was a very different place. It wasn’t all bleak and abandoned, but it was a far cry from what we experience every day in 2017. Many of the goods and services we take for granted now were in short supply. Coffee, for example, which can be had in numerous locations and variations around the center city wasn’t nearly as readily accessible. In the time since, coffee shops are taken for granted. Additionally, numerous small restaurants offer excellent coffee.

It was into that first environment that Eddie Mannis decided to open two new downtown businesses in the Phoenix Building: A new location of his Prestige Cleaners and the Downtown Grind. Each filled a need that few others had addressed. Each have continued to contribute to the building that I have described as downtown’s MVP of buildings, housing those business, a bank, a pharmacy, a primary care clinic and an ice cream shop.

Given the shift in environment, Eddie Mannis has decided to close the Downtown Grind, while keeping the Prestige Cleaner’s location open (my boots and coats thank you for the last part). It marks the end of a nearly thirteen year run that Mannis described as a, “gift to downtown Knoxville and our way of helping with the revitalization.” He never thought it would be a big profit center for him. With the explosion of coffee shops and quality coffee, it became more difficult to compete and make a reasonable return.

His announcement on the Downtown Grind Facebook page indicates that the shop will close Friday. I was told today the last day will, in fact, be Sunday. I spoke with Robin, who many of you know from her work behind the counter there and in the cleaner, where most employees have performed double duty, shuffling back and forth as needed. She first came to work for Prestige in 1994 and has worked in the shop since its opening. She’ll continue working for Prestige and you’ll likely see her in the cleaners in the rear of the building.

I also spoke to downtown artist Cynthia Markert who, many of you know, also works there.  She said, “I was a self-employed artist when I began peeking in the window of the soon to open Downtown Grind and I thought it lovely. It reminded me of Asheville.” She loved coffee shops and had, “fantasies of a coffee, used books, art place of my own.”

She had worked as a bartender at the downtown Radisson she says, “mostly because of their cappuccino machine,” so she applied and began working there and displaying her art on the walls. She says she’s met, “some fabulous people through the years,” and will miss the residents of the Phoenix. Her immediate plans are to, “devote more time to my artistry.”

I’ll miss the Downtown Grind and I’ll miss seeing Robin and Cynthia on a regular basis, though I’ll still see them in other connections. I had many good cups of coffee there, along with a lot of good conversation and interviews. Urban Girl cried when she heard the news, remembering good hot chocolate and muffins. We’ll gather for one last treat tonight and toast a place that made its own little contribution to our downtown renaissance.

When I know what will take the space after the closure, you’ll be the first to hear.