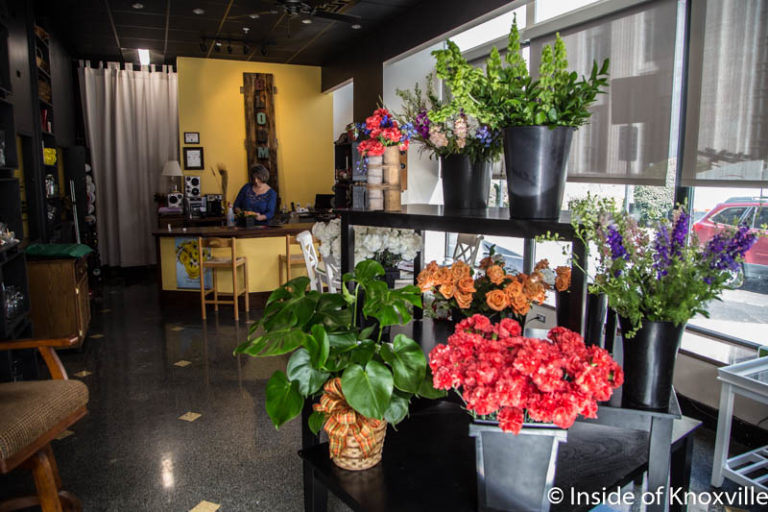 Downtown Knoxville gained a second florist this week with the opening of The Bloomers Company at 603 Main Street, Suite 102. Located in the Medical Arts Building, some of you will remember the space as Flow: A Brew Parlor. I spoke to co-owners Lyn and Danny Jones and Lyn told me she understood it was also a florist years ago.

The couple grew up in Asheville, a town which they say has changed tremendously in recent years with more of a Bohemian feel than the small town/small city feel they loved growing up. They sense some of that small city vibe in Knoxville and they like it.

Danny worked at Allison’s Flower Shop in Asheville at age twelve and always enjoyed flowers. After a career in law enforcement – as an investigator in the latter years, he retired and the couple moved to Sarasota Bay, Florida where they opened a florist. Lyn’s background was in business, primarily with local government and while the business background predictably helped, they also realized she had a real eye for floral arrangements. Lyn said, “I love the creativity of it. You get to see what you create adn no one is ever unhappy to see flowers.”

The couple operated the floral business in Florida for about five years and while there served a high number of destination wedding floral needs. After five years, they felt the need to be nearer family and Lyn’s brother and mother had relocated from Asheville to Knoxville and so they moved here, bringing their connections to Ftd., Telaflora and Bloomnet. In fact, they’ve been filling orders continuously since moving here in May, even though the shop on Main Street just opened this week.

Danny said, “Flowers say ‘someone remembered me,’ whether it’s a birthday, a funeral or an anniversary – or just another day. This is especially true of older people and people who didn’t expect to get flowers. And then you get to hear their stories!”

The couple supports Random Acts of Flowers and, in fact, were waiting for them to pick up some carnations when I was there to take photographs. They said they like that it gives flowers a “second shot.” They are considering incorporating a mention on their cards for funerals so families not only see who the name of the giver, but a note stating the flowers will be used again.

Downtown is a starting point for what they hope will be several locations in the Knoxville area. They said it was an attractive starting point because with only one florist downtown, they felt there was room for another. They like the Medical Arts Building because of its proximity to so many offices whose workers are a target audience. They point out they can deliver to an office during the day so the flowers can be taken directly home after work.

They were also attracted by the fact that so many venues which might use flowers were located in a small radius from the new shop. All the downtown churches, funeral homes just up Broadway and out Chapman play a part. But it was the other event venues which caught their attention. The Convention Center, Foundry, Standard, Jackson Terminal, Southern Depot, Southern Station and The Mill and Mine form a solid set of venues needing flowers for receptions, weddings and other events.

They also liked the proximity to UT and are accepting Vol Cards. They are members of the Chamber of Commerce and like the proximity to that, as well. Downtown just seemed like a good fit in general.

Dropping by the shop you also might find Ariel Snyder, a part-time employee and Charlie the (absolutely sweet) Springer Spaniel.