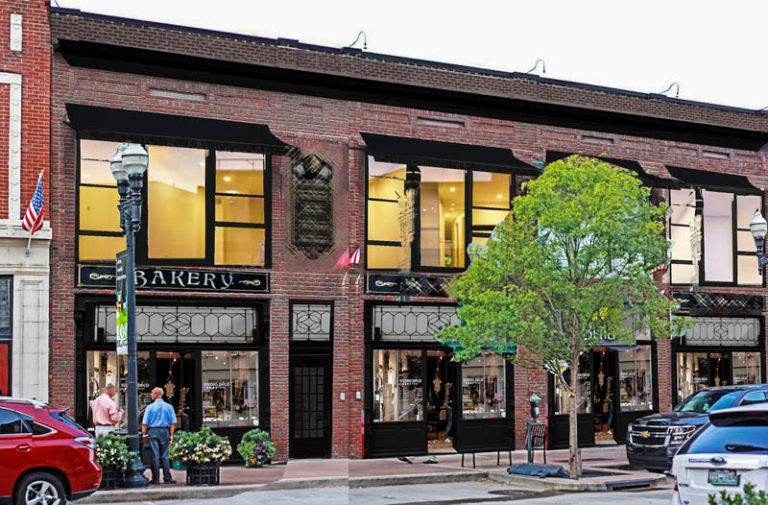 Since the closure of Patricia Nash’s showroom and offices at 109 S. Gay Street, I’ve been asked repeatedly what would happen there. Additionally, Bula Boutique closed its doors recently at 115 S. Gay Street, just two doors down. While the two addresses might seem unrelated, they are not. The small building formerly housing Patricia Nash is owned by Jeffrey Nash. He recently purchased the Hubris Building which includes 119 S. Gay Street, currently home to Attack Monkey Productions through the current location of Gallery 1010 at 113 S. Gay. The other business located there is Meadowsweet Massage at 117 S. Gay.

So with five consecutive current storefronts now in his possession and work of some sort underway, what are Mr. Nash’s plans? We sat down over lunch and he detailed the plans, including the entirety of the buildings – two floors of which cannot be seen from the front as they are under Gay Street.

The plans will unfold over the next eighteen months to two years and will be completed in phases. Of the businesses remaining – the gallery, Meadowsweet and Attack Monkey, his intention is for Meadowsweet Massage and Wellness to remain. It is a successfully growing business which has operated on the block for five years and fits his vision of the types of businesses he feels need to be nurtured there.

I reached out to Chyna Brackeen to inquire as to Attack Monkey’s plans and she told me, “When I moved into the building several years ago (I think it’s been six years), I knew the day would come that we’d need to move. I actually thought it would be much sooner, and that foot traffic/retail would pick up on the 100 block but that just hasn’t been the case. I’m currently looking at a couple of different options, both of which are outside of the immediate downtown area. And they are very different spaces, but the end result of both would be something that has more of a “public” face instead of just office space.”

The Hubris Building (a name previously unfamiliar to me) construction will primarily begin out of sight from Gay Street, on the backside of the building overlooking the courtyard enclosed by that block and by the Armature. Each of the four, two story, locations will become townhouses facing the courtyard. Floor plans will be similar to those in the Mews, another Nash project, with a master bedroom, bath and walk-in closet on the upper floor and the kitchen and living space on ground level. The bottom (still rear side) of the former Patricia Nash building will become a two bedroom, two bath apartment.

The units will be developed as the first phase of the project and will be offered for lease and will overlook the courtyard shown here, which was built originally for the use of the residents of the Armature. With sculptures, murals, ornamental trees and a small wooded hilltop to the rear, it is one of the prettiest and least expected spaces in the city.

The side of the building facing Gay Street will also get a major make-over, as shown in the rendering above. There are currently five units over the Hubris Building which were built-out in 1998. It doesn’t take much imagination to consider the contrast in what would be a 1998 construction in downtown Knoxville compared to 2016. The five units will be consolidated into four units and will be finished with high-end finishes. They will also be offered for lease.

The final phase of the project will focus on the street-level retail facing Gay Street. In addition to improving both the facade – returning it to a similar look to historical photographs and making it a uniform look across the addresses – the interiors will be improved. And Nash has a specific vision for the retail he’d like to see occupy the spaces: “It’s all very well attracting retail, but we need to be attracting support retail.” He notes that finding a screwdriver or cell phone batteries is currently difficult, if not impossible downtown.

Saying he’s “less convinced,” that a grocery store is a current priority, he’d like to see a baker and a butcher, for example, on that block. He mentioned a proper nail salon. All these types of retail have in common that they are directed at residents and not at visitors to the city. With about “68%” of downtown residents located in a swath from Marble Alley through the Old City and up to the 100 block, he feels this area can be one in which resident’s needs are met and less about shopping that might attract tourists.

He feels we don’t have the proper size spaces for these businesses, which is one reason he’s diverting the lower floors to become residential – the extra space was simply a burden and was underutilized for most businesses along that stretch. He said he’s already had a lot of interest in the spaces, but wants only the right kind of retail in those spots. To that end, the former Bula Boutique and the current 1010 Gallery spaces will eventually be combined, forming a 1350 space with larger Gay Street frontage.

One note regarding progress on this project: After the completion of the new offices above the former Patricia Nash location, you may not see much going on for a long time. First, the initial work will happen, as I said, on the levels beneath the Gay Street level and to the rear. Additionally, however, a maze of electrical and plumbing work beneath the street has to be sorted out. New regulations in the intervening years have rendered the archaic infrastructure non-compliant. Sprinklers will have to be added. They’ll have to be careful about noise in order to disturb Meadowsweet as little as possible.

The two levels beneath 113 have “never been touched.” They have no separating floor between them and are filled with wiring and plumbing running to the various addresses in a pattern that grew organically and is not mapped. All of that will have to be sorted out and replaced with as little disruption as possible to the addresses above. It will be tedious and slow, but Nash seems to relish the challenge.