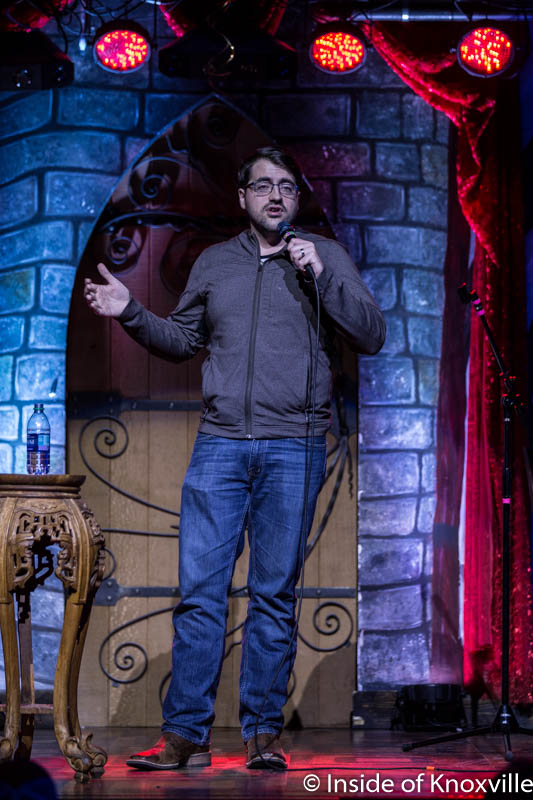 I ended my weekend with the Scruffy City Comedy Festival. Unable to make the first two nights, I caught the final set at Scruffy City Hall on Sunday night. And it was a great way to start a week that could be short on laughs for many of us as this depressing election drama finally comes to a close.

I’m not the best audience, try as I might. I don’t really find a lot of comedy to be that funny. I can’t laugh if I don’t feel it. I can appreciate how hard it is to get up on the stage and expose oneself to that kind of intense exposure. I also appreciate the hard work that has gone into making Knoxville’s comedy scene a vibrant one. Matt Ward, particularly, has done much of that work. Shane Rhyne and others are currently keeping that scene going on a weekly basis.

Matt, however, is the one who put this weekend’s festival together and this marked its third annual edition. This year’s festival ran three nights and also included events such as “Blue Umbrella Tours,” and a podcast brunch. Local comedians blended with regional and national comedians to fill the festival roster.

The final night included an excellent lineup and I found myself laughing out loud the whole night. The night started with the improv work of Full Disclosure whose creativity with improv I’ve mentioned before. Shane did a very funny, brief set and emceed the rest of the night. The others were funny, but I thought Lauren Faber, Aaron Chasteen and Hunter Roberts stood out. Aaron is local and uses his speech impediment to great comic relief, while the others are from elsewhere in the south.

The headliner was Trae Crowder and this may have been one of the final opportunities to see him in such a small venue. His “Liberal Redneck,” videos have gone viral this year and have propelled him to appearances on national television and to a headlining national tour. Much of his set Sunday night focused on familiar terrain to those who have watched his videos and worked just as well, or better, on the stage.

Interestingly, two days before the national election and with a lineup of liberal comics and with a headliner whose online rants about politics have kept many people laughing through the election, there was not a mention of either presidential candidate. Maybe we really are all sick of the election before it’s held.

But it was good to laugh at the beginning of this week and it’s important for us to remember to laugh (and breathe) as it progresses. The sun comes up tomorrow and even the day after the election, no matter who wins. Might as well laugh in the meantime. The content below may be graphic, so watch/listen accordingly.