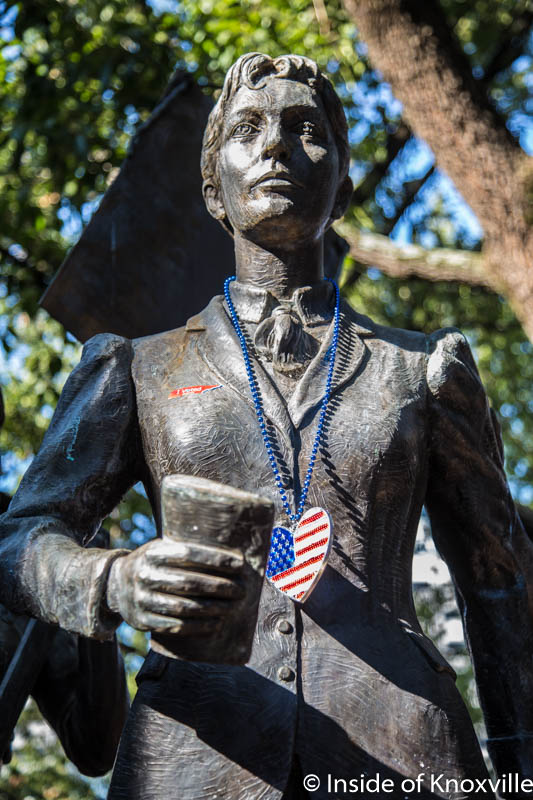 It’s election day and people from downtown Knoxville to every spot across our country will go to the polls to cast their votes for president and for a number of other important offices. We’ll also decide a great range of issues directly via our votes on various ballot initiatives. Legalizing recreational use of marijuana is on the ballot in five states and has gotten the most coverage, but there are important questions on our local ballot, as well.

It’s been a crazy journey to get here. Predictions were easy to come by a year ago that one or both of these candidates would not make it to this day with their party’s nomination. What ensued was an election unlike those of us currently alive have ever seen. Have the genitals of each gender ever had so much focus in a campaign? When was the last time calls were heard for one of the candidates to be imprisoned after the election? When was the last time that an election was called “rigged,” before it ever happened?

A number of Americans are unhappy with the choices. Larger numbers than is typically the case on both the left and right have voiced a preference for an alternative candidate. The “lesser of two evils” argument has been mentioned with considerable frequency. It would seem a recipe for sitting this one out – but locally we aren’t doing that. In Knox County we cast 141,111 votes via early voting and absentee ballots. This represents a 23% increase over 2012 when we cast 114,397 early votes.

Nationally, there is a slightly different story, though with caveats. Forty-two million have cast ballots across the country, a considerable drop-off from forty-six million in the previous cycle. Much is being made of the sub-groups that represent exceptions to the trend, such as the 152% increase in the Latino vote in Florida, but we won’t really know how much the meta-data matters until after the election.

The bottom line is that someone will win the election today. As much fun as the media has speculating about a contested election or a tie in the electoral college, those things won’t likely happen. Why? Because in the United States we vote and we move on. Power changes hands in accordance with the system we’ve established. Close to half of us don’t like the decision, but we accept it. In past times we actually made at least some display of supporting the president.

I’ve not been happy with all the presidential choices made by my fellow citizens in a number of the elections since I’ve been around. In fact, looking back over the list in my lifetime, I approve of less than half of them. Some of the elections have left me angry and bewildered at the collective decision. At times, I was certain we were headed for disaster and sometimes I felt that was confirmed by subsequent events.

But the sun came up the day following the election. Despite the election results, my life didn’t change immediately for the better or worse. I went to school or to work. I didn’t change my life plans. To take it further, as the supporter of the losing candidate, I wasn’t imprisoned, persecuted or killed. Quite simply, for the most part, my daily life continued as it had been and so did those of most other people.

That’s not to say that we accept the loss easily. Remember the bumper stickers, “Don’t blame me, I voted for Bush?” Remember how shocked and angry so many Gore supporters were when a total of 537 votes in the state of Florida decided the presidency? Thankfully, some of the worst tendencies of even our bad presidents are kept somewhat in check by congress, the Supreme Court and public opinion. As this election cycle has shown, it’s also harder than ever to hide damaging information from the public.

But if you awake tomorrow to your worst nightmare, it’s likely not the worst outcome in history. U.S. News averaged five polls of historians and selected Buchanan, Harding, Johnson, Pierce, Fillmore, Tyler, Grant, Harrison, Hoover, Nixon and George W. Bush as the worst ever. Most of those are so far back in history that the scope of their presidential failures have faded from the general collective consciousness. Which is sort of the point: We survived and moved on.

So, am I suggesting that the election doesn’t matter? Absolutely not! Even though any one of us could predict which color will fill Tennessee’s shape on all those helpful maps tonight, I voted early. And I feel strongly that my candidate is the best. I will be afraid if the other candidate wins. I think most voters would agree with that assessment, even as the candidates we support and fear may not be the same.

I feel it is imperative that each and every one of us vote. I see it as a duty. It seems hypocritical to me for a citizen to say they love this country but can’t be bothered to vote. If we love our country, but the other side wins, we need to remember this isn’t a sporting event. If the other side wins, we all need to help them help our country move forward. We need to be willing, as we were in the past, to find compromise to fix the enormous problems and challenges we face. We need to tone back the vitriol. We all want the best for our country and we won’t find it by yelling at each other.

So vote if you haven’t already. Then breathe. Know that it is going to be OK. Recognize the miracle that after 240 years we are still around and more of us are allowed to participate in this grand experiment than has ever been the case. Honor the women pictured here who led the suffragette movement in Tennessee, who pushed and prodded this state – down to the very last vote needed – to ratify the nineteenth amendment. Tennessee saved that effort at the last minute with a 50-49 vote in favor.

That’s right, we did that. The least we can do today is honor those women by voting. And then by accepting the will of the people.