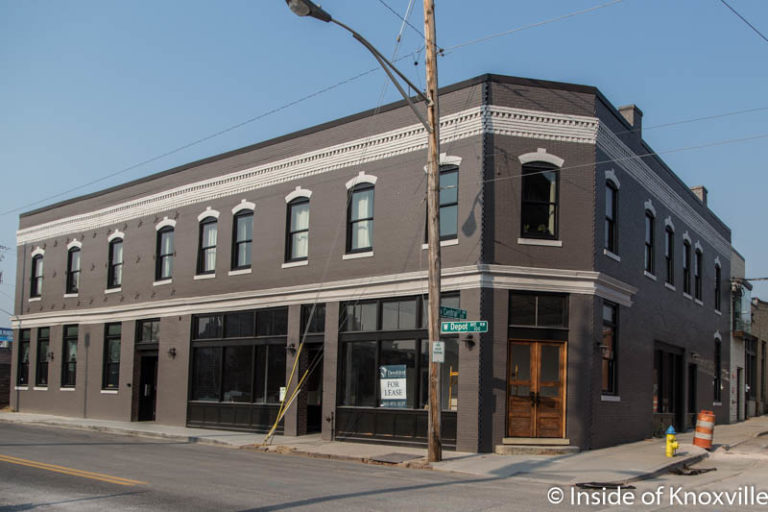 Prior to its facade improvements last year by Dewhirst Properties, the 1894 Saloon building might have been overlooked or dismissed as an old, tired and no longer useful building. In fact, the building had been in use by Dewhirst Properties for over a decade as a staging ground for woodwork and metal work which found its way into a number of the restorations completed by the company. By 2015, the time had come to give the building its due and Whitney Manahan took the lead for design with Brian Hann and crew doing the construction.

Mark Heinz told me the best they have been able to narrow down the construction date of the building is somewhere between 1892 and 1896, so, splitting the difference, they decided to incorporate 1894 into the name. The building did house a saloon, with a boarding house upstairs. A small upstairs fire prompted the removal of access to the top floor -which preserved the boarding house with many of its architectural elements.

As stated on the website, “Elements from the boarding house were salvaged, repaired and reused in the apartment renovation including doors and doorknobs as well as woodwork, trim and rosette details. The double saloon doors were also found on the second floor and returned to their original location at the corner of Central Street and Depot Ave.” The doors were a particularly exciting find and they beautifully front the building facing the corner of the block.

As with all Dewhirst Properties, a emphasis was placed on retail space on the ground level and residential upstairs. Twelve residential unit were built on the second floor. The alley in the rear of the building was enclosed for a stairwell with a residential unit at the top. The new construction was given a modern aesthetic to distinguish it from the historic building. You can see the bay window in the photograph of the view from Central Street and you’ll notice the alternately colored brick.

The primary retail space was built to flexibly respond to clients’ needs, with the capacity for one large or two smaller businesses. This involved construction of separate restrooms for each potential space as well as separate HVAC systems. Currently divided, the smaller space facing Central has been leased and the smaller space has strong interest. AIA occupies the western corner on Depot Street and will soon have attractive signage.

The four units on the western side facing the small alleyway were built to be usable as either live/work or residential space. Current thinking is that they will ultimately be retail, but residential demand is currently stronger and so they have been residences. The fencing is temporary and will be removed with the apartment building planned for the adjacent lot is built. The two buildings will have a shared courtyard between them similar to the Mews project which backs up to this property.

Residential demand is strong enough that Mark Heinz told me the property, never advertised, was leased immediately. There is currently one unit back on the market. Pictured here, it is a two-bedroom spacious apartment facing the side courtyard. Remaining inside the closet of the master bedroom is framing for a window and a bricked over door is visible in the wall. The building has a surprising amount of interior light thanks to skylights and it includes some of the fixtures salvaged from the White Lily Building just across the corner.

As was the case when I spoke to Jeffrey Nash last week regarding the Hubris Building on the 100 Block, the hope here is for support retail, as opposed to visitor or tourist-geared retail. Clearly it’s another step toward David Dewhirst’s prediction that Depot would become a residential and retail center. It’s happening now. Take a walk and check out the building and, hopefully soon, I’ll have word on the coming tenants.