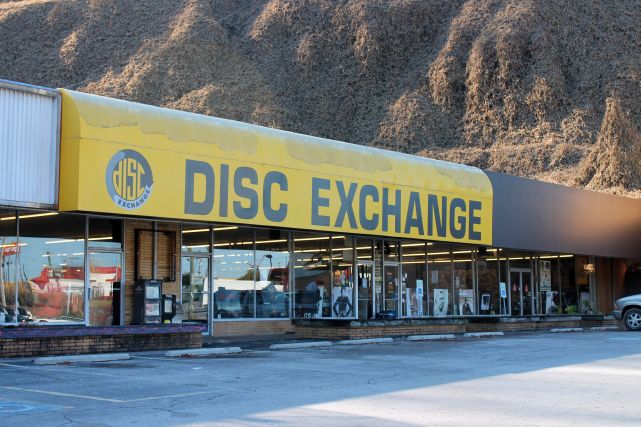 Disc Exchange, Chapman Highway, Knoxville, December 2012
Continuing the theme of catching up on little developments across the city in recent weeks, let’s look at a number of other recent changes. I’ll also have a few tidbits that haven’t been reported elsewhere and answers to a few questions I’ve had thrown my way. There are a lot of moving parts to this place, wouldn’t you say?
Let’s start with a couple of developments which have been reported or alluded to by Hatcher Hill. Some of you will recall, and Cliff asked about it just yesterday, that just over a year ago I wrote about a planned development of row homes on Vine Avenue. The ambitious project to build seven luxury units on Vine Avenue beside Ryan’s Row. Cliff also asked about previously announced Hatcher Hill plans for the space on Gay Street between the Century Building and Mast General Store.
I spoke recently to Tim Hill who told me that the group has determined the Vine Avenue row home project “is currently not economically feasible.” He said they are “in the conceptual phase of the Gay Street Project. We have submitted an application for a TIF and are awaiting that process/ approval before we are able to move forward.” Hatcher Hill only owned a portion of that property and, according to Mr. Hill, they have, “the remaining land between Mast and Century Building under contract. The disclosed plan calls for a multi-story condo project, contained parking, 20,000+/- square feet of restaurant/ retail shops, and pedestrian thoroughfare helping connect Gay Street to State Street.”
I also asked him about Lenny’s Sandwich shop which was located in a Hatcher-Hill Building and recently closed. As far as I could tell, the business was doing well and its departure caught a number of people by surprise. The business closed due to difficult personal family circumstances for the owner and she and Hatcher Hill simply agreed to dissolve the lease for her benefit. And I don’t think it has been reported elsewhere, that the space is currently undergoing a majoring renovation to make way for PotBelly Sandwiches. The lease was signed soon after the closure of Lenny’s and the group hopes to open by Thanksgiving.

Another big, recent, development is the announced closure of Disc Exchange. Co-owner Jennie Ingram was quoted as saying the business has declined as digital sales have replaced CDs. This leaves no independent provider of new CDs in the Knoxville area. It’s fascinating that a medium which destroyed the vinyl market would itself disappear so quickly. It puts local bands in an odd place: If you record music, do you press CDs? How do you distribute your music to fans – particularly at shows, which is likely where most local/regional bands will sell their music.

Beyond the technological story, there is the human story. It’s a loss of a great place for discovering new music and hanging out with other people with similar musical interests. My memories include waiting for midnight releases at the west store when it was open. Most notably, Urban Daughter and I hung out till after midnight on September 11, 2001 for the release of Bob Dylan’s “Love and Theft.”
On numerous occasions I bought discs after hearing them played while I shopped. Specifically, I remember picking up Jimmy Hendrix’, “West Coast Seattle Boy,” Cowboy Junkies, “Black-Eyed Man” that way. And the in-store performances at the south location were a bonus. Probably the most memorable I heard was by the Civil Wars. The list of performers who played there is pretty astounding for an independent CD shop.
So, for local music there aren’t many options. Sometimes local used record shops will stock new vinyl, but not so much the CDs. It appears downloads or streaming new music will be the only option for new music. I hate that future generations won’t have that cool record store experience I always loved. Times change – and now they change with increasing rapidity.
I’ve had readers ask about and comment on the fact that the Artistic Bean is no longer occupying the end space in the building at 1322 N. Broadway. I spoke to co-owner Mohammed Fawaz who told me, “I merged the artistic bean with the juice box. I ran out of seating at the coffee shop so decided to move it in to the juice box. Both business continue to grow so it was a good merge.” The Juice Box is operated by the same owners a couple of doors down from the previous coffee shop location. The corner space might be available to someone with the right idea. The Tata truck front needs to go to some use. It’s just too cool.
Numerous readers have asked about the project on Central at the entrance to the Old City where Big Don’s used to be. It’s called The Crozier and work appears to the naked eye to have stopped at the point of digging a very large hole. Daniel Smith, one of the developers assures me work is still underway. Delays resulted from the discovery that they would have to put foundations twelve to fifteen feet below ground-level. A number of design changes have followed and construction should be obvious very soon.

I’ve also include a couple of photographs of other recent changes. One is of the very wide sidewalk in front of the Daniel. For those of you familiar with this part of town, you’ll notice the absence of power poles. It’s part of the larger streetscapes project for the Old City, which will continue for some time yet, after which the Jackson Avenue viaduct will be replaced. The other photograph is of the space outside the Mill and Mine, which has recently seen significant improvement.