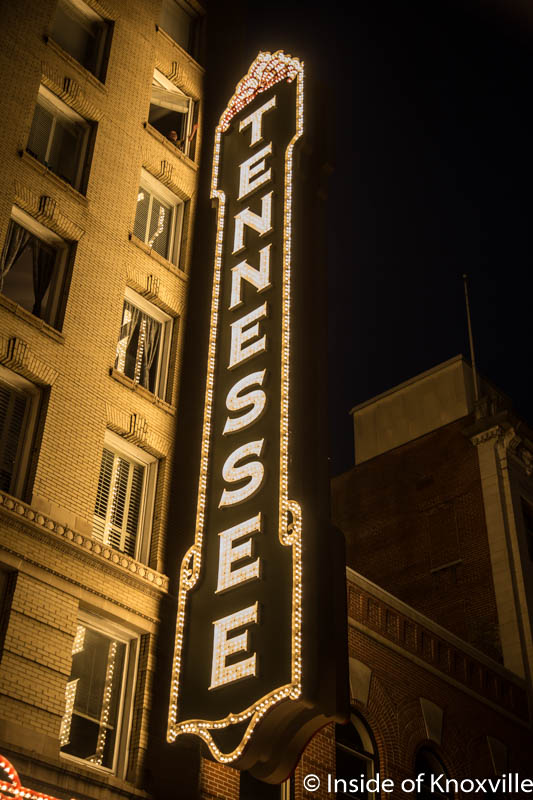 The long story of the Tennessee Theatre continues and, happily, most of the recent chapters have been happy ones. Originally built as a movie palace, it opened its doors on October 1, 1928 with a showing of “The Fleet Is In.” More of these palaces, often funded by movie companies such as Paramount, opened in in 1928 than any other year. Chicago architects Graven and Mayger, who only worked together for fifteen months, designed the Tennessee and seven other Moorish Revival style theaters. Of the original eight only two survive: The Tennessee in Knoxville and the Alabama in Birmingham.

By the 1940s with the advent of common ownership of the automobile, migration began to the suburbs and move theaters we built there. Television also reduced the number of people going out to the movies. By the 1970s the theatre, along with most of downtown Knoxville, was in serious decline. Closed in 1977 and with its future uncertain, James Dick (who started WIVK) purchased it in 1980 to ensure its survival. The theatre, which had enjoyed minor refurbishments in 1966, was, once again, given a cosmetic makeover in 1981 by Mr. Dick, who operated it for fifteen years. He shifted the focus to live performance.

The non-profit Tennessee Theatre Foundation gained control in 1996 and, recognizing the severe limitations to presenting large productions, almost immediately began raising funds to return the theatre to its original state in front of house and to enhance back-of-house for load-ins, lighting and sound, larger stage area and adequate space for other functions like dressing rooms. It closed in June 2003, re-opening in January of 2005 after an expenditure of approximately $30 million.

While those of us who remember the repairs of 2003 to 2005 very well might consider that a very contemporary effort, the subsequent eleven years have brought changes to the technology available. The light bulbs had faded, hail storms resulted in damage to each and the marquee suffered at the impact of various trucks over the decade. Clearly, a next step to continue to preserve, repair and modernize the signs was needed.

A project to raise money to refurbish the signs began last spring. The city of Knoxville awarded a grant of $65,000 toward the anticipated $156,000 project. Pattison Sign Group agreed to complete the project at cost. Individual donations were solicited and people purchased light bulbs, prints of the sign and specially designed ornaments. In total, $136,000 has been raised to date.

The determination having been made that the blade sign would need to be removed from the building for repair, on June 6 the four-ton sign was removed using two cranes, one attached to the top and another attached to the bottom. With it loaded onto a flat-bed truck and removed, work on the marquee began in earnest. Repairs were made where needed, it was re-lamped with new generation LED lights and a moving message board.

On August 23, the newly improved blade sign was returned to the building in a dramatic re-mounting process that had most of the gathered crowd holding their breath. All went well and, the sign secured once again, a re-lighting celebration was planned for last night with an open house, backstage and onstage tours. Just after 8:00 PM the crowd of hundreds gathered on the closed block of Gay Street and, after remarks from the mayor, the sign was relighted, hopefully to shine brightly for years to come.

And shine brightly, it did. Gay Street was lighted for blocks by the 5700 new LED light bulbs. Nearby residents began to grumble, though half-heartedly and with a bit of pride. It was another good night for city and it made me wonder: Are there other cities where hundreds of people would gather downtown for a sign re-lighting? It was quite a display of civic pride and I think everyone was happy to be there on the historic occasion.

It’s one of the most photographed sites in our city and probably in the state and a point of pride for locals as well as a point of interest for visitors. Check it out after dark tonight and enjoy our generation’s contribution to the ongoing preservation of a Knoxville landmark.