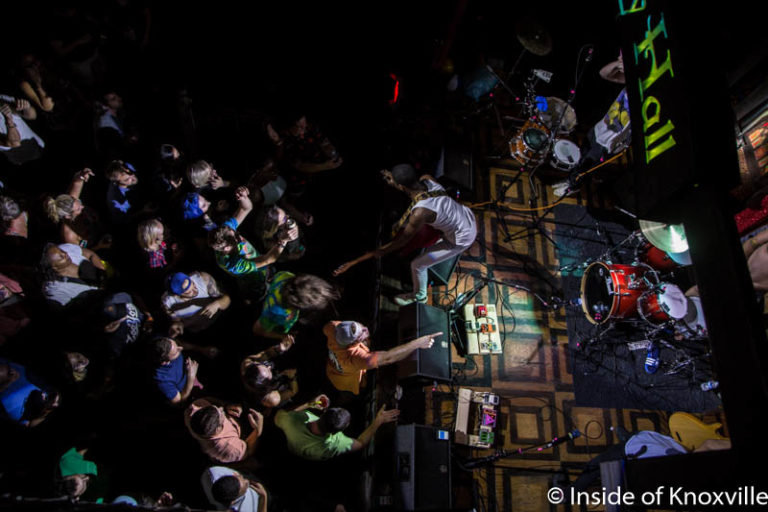 It’s hard to imagine that all the following happened in downtown this weekend: Rappelling off the Langley Building, Dragonboat Races in the Tennessee River, Moonlight Paddleboard Racing in the same river, a history lecture by Jack Neely. What’s harder to imagine is that I didn’t make it to a single one of these or any of another several dozen possibilities. That would have been unimaginable when I started writing this blog.

Why did I miss so much? Well, we were tied up Friday night and then BlankFest and the Asian Festival took control of the rest of our weekend. I wanted to catch as much of the music as possible and I wanted Urban Girl to experience other cultures while that was available. That could have been accomplished by attended the German Festival the same weekend, but there is only so much that might be done in a given weekend.

I started Saturday with BlankFest. Some of my favorite bands played Friday, but I just couldn’t make it, so I looked forward to the bands I’d see over the next two days. The festival, organized by Blank Newspaper, is one of the very best spotlight events for local music while adding a nice dose of regional and national artists, such as headliner Perpetual Groove from Athens, Georgia, who played Friday night. Over the course of two nights I heard samples from eighteen bands, which is a great way to find new favorites and cover a lot of territory in a little time.

Saturday and Sunday both were split between Preservation Pub and Scruffy City Hall, with overlapping schedules, which made it possilbe to switch venues every thirty minutes and catch everyone, which is pretty much what I did. I started with Magnolia Motel in Scruffy City Hall before switching over to RB Morris’ blistering set in Preservation Pub with Tim Lee 3 as backing band. Vocals were a bit muffled at all the Preservation Pub shows while overall the sound was fine, but for an artist like RB Morris, that’s a loss. His set focused on material he doesn’t play as often and it rocked.

I caught fine sets from the Monday Movement, Thrift Store Cowboys and Bark. Grandpa’s Stash, a Knoxville collective for eleven years (they called themselves “pre-teens”), delivered a great set which I really enjoyed having somehow missed them for the last decade. I love a little brass with a live band. Gillian, a Brooklyn band whose lead vocalisty Kym Hawkins has Knoxville ties really got the crowd stoked. Nox Yorc rocked Preservation Pub next with blazing guitar by Mike Walker, taking long experimental jams and solid keyboards by Marcus White.

Hudson K was great, as always. Christina Horn owns a stage like no one else I’ve see locally except for perhaps Russ Harper, which is a whole different matter. I caught Time Sawyer’s good set which included a guest spot with Cozmo Holloway before ending the night with Baby Baby, who gave one of the most high energy shows anyone could ever hope to see. It was the high point of the festival for me. I elected to preserve my energy for Sunday by heading home at a relatively early 12:30 AM.

Sunday, for me, started with a great day at WUTK studios with my co-host JJ Pershing on Knoxcentric: Powered by Inside of Knoxville.com. I had great chats with Becky Hancock, Executive Director of the Tennessee Theatre and Bradford Johnson of the local Liverpool Football Club (more on him coming soon). After the show, most of the Urban Family headed to the Asian Festival. We quickly got Urban Girl set up with a passport which she started working on and we caught a couple of the performances on the main stage.

First impression: the crowds were massive. This is a festival which, to most people, has been a small footnote. In its third year, the first two resided on Krutch Park extension. We arrived right around 11:30 expecting the new footprint which included Market Square, Union Avenue, Market Street and Krutch Park extension, would leave plenty of space for everyone involved. Not so. It felt like the Hola Festival, if not bigger. I think the organizers worked very hard to promote it, fearing they couldn’t draw a large enough crowd, and blew away their expectations.

The good news is the crowds appeared. The bad news was the heat. Most of my crew wilted after about an hour and headed for ice cream. Urban Girl, hardy soul that she is, persisted and we visited the children’s area, building a miniature bowling alley (not very Asian, but fun), fishing for water balloons and watching bigger kids in bubble balls. A group of young Asian rockers played on the small stage while we walked about enjoying activities. It reminded me of my Sunday afternoon in Yoyogi Park in Tokyo, walking down broad walkways lined with Japanese punk bands. Fun memory.

We also piled up on Asian food, but we took it back to the house to enjoy it. Once again, I was reminded of one of the great reasons to live downtown: During festivals we can retreat to the house, recover and then try again. It’s great for cooling off on hot days, using your very own bathroom and having lunch at your own table. Another sign that the crowds were larger than could possibly have been imagined: Food vendors were running out of food. Most of them had very long lines at 1:30 PM and many had items crossed off their menus. This is definitely a festival to watch in the future. It’s officially on the map.

I ended the weekend with the second installment (for me) of BlankFest. Crowds and the vibe generally were a bit slower on Sunday evening. Southern Cities blew the roof off Scruffy City Hall with material from their new CD which I followed with an amazing set by Cody Brooks, an amazing guitar player from Nashville. He was backed on drums by former Wilco and Uncle Tupelo drummer, Ken Coomer. That was the kind of talent level on display all weekend.

I finished the evening out with Minor Moon, The Wild Jays, Hellaphant, Magamablood and Handsome and the Humbles, fine sets all. I opted to go home at 11:00 PM to save a little energy for the week. In addition to the photographs you see here, there were hundreds of others. I took 400 at BlankFest and kept about 145, which you’ll find soon on the Inside of Knoxville Facebook Page.