The International Biscuit Festival 2014: Biscuits Coming Out of Our Ears 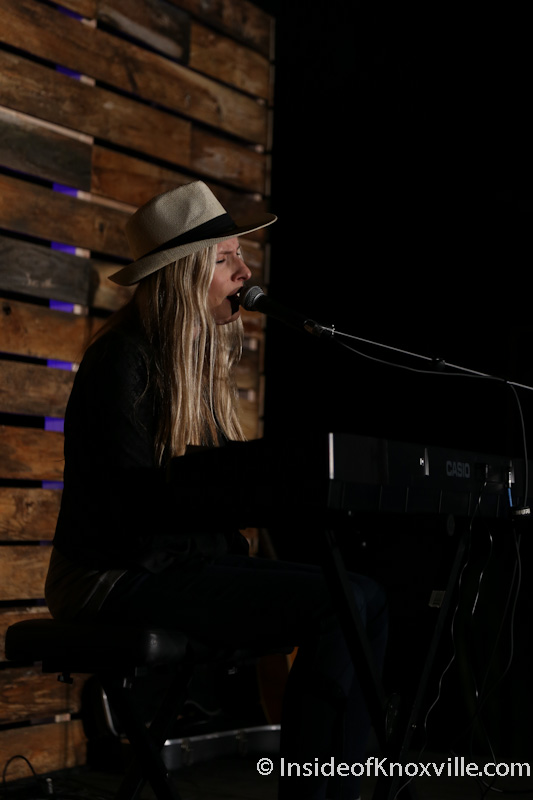 It was a full biscuit kind of weekend. It started last Thursday for food writers and aspiring food writers with the Southern Food Writing Conference and continued through the Biscuit Bash on Friday night. The heart of the festival, of course, is Biscuit Boulevard on Saturday, which is the only part most people attend. There’s also the Blackberry Farms Biscuit Brunch on Saturday morning and this year the festivities continued on Sunday with the Great Food Truck Extravaganza on Gay Street followed by An Evening with Tyler Florence in the Tennessee Theatre. In case you are like me and don’t find much time for television, Tyler is the host of the Food Network’s highest rated program, “The Great Food Truck Race.”

For me, the event started Friday night with the Biscuit Bash at The Standard. Urban Woman and I enjoyed the great dishes prepared by chef Matt Gallaher of Knox Mason. Each of the recipes came from cook books of authors who participated in the Southern Food Writing Conference and many of those authors were available to sign their books. Moonshine cocktails were also provided in a couple different versions. Our favorite was the pineapple.

Tickets to the event were $75, which is pretty steep, but the deal of the night was $10 to see Holly Williams. Some of you saw some of the shows in The Standard during the Rhythm and Blooms Festival – including a show by Ms. Williams. The Standard was the star venue for many of us who saw those shows. It feels and looks like a smaller version of Austin City Limits. More music simply has to happen there. I also thought the sound was great at each of the shows, so acoustics are no limitation. The set for this show was as pitch perfect as for Rhythm and Blooms.

Emi Sunshine opened and charmed the audience, earning a standing ovation. Holly played acoustic all night, accompanied by one guitarist/vocalist. She mentioned feeling vulnerable without a band, but I really enjoyed it and felt she could have stood alone, though her partner did add some value. Her songs are heart-breakingly honest and direct. After the show a friend thanked me for having alerted her to Holly in previous posts and cursed me for not having warned her how sad some of the songs can be. That pretty well sums it up. If you haven’t purchased Holly’s 2013 release, “The Highway,” you are missing some great music. We listened to it, again, after the show.

Saturday morning I arrived at the festival about 9:30 and it was swamped, already. Some of the booths, like Tupelo Honey already had very, very long lines. The line for Tupelo Honey (pictured here) was about three quarters of a block long. The ticket line was half-a-block long. A ticket gave you so many samples and allowed you to get into the Tupelo Honey line and others. The smells were great, but the whole thing was a bit daunting. We really just wanted to buy a biscuit or two of our choosing to enjoy. If that was an option, we didn’t see it.

Vendors were also set up along the way with a mix of local and national, store-front businesses and personal marketing. Mast General Store, CityFid-O, the Tree and Vine, Pampered Chef, Southern Living and a bunch more that I couldn’t catch a glimpse of. Vienna Coffee and Blackberry Farms seemed to be popular – and for good reason. Blackberry Farms had some great cheese on hand, but sold out of the kind I liked best (was it Gouda?) before I got there. I talked to a young woman in that booth who says they have a booth at the Maryville Farmers’ Market, but don’t really have the personnel to staff a booth that the Market Square Farmers’ Market. That’s really too bad.

Naturally, I wanted to hear some of the music, and the primary stage was situated at the southern end of the festival. I could not get there by staying on Market Street. There was absolute gridlock. I walked through the courtyard between the various bank buildings and found a lovely row of tables set up for patrons of the festival. It was a quiet little enclave in the din of confusion. I would love to see tables permanently affixed in that location with food trucks always parked beside them. I circled through there and came out on Church to do an end around and easily walked up to the music.

The music started and ended the festival for me. What I found when I got to the stage was Jimmy Brown Johnson and the Band of Awesome. A nineteen-person ensemble spilled off either end and the front of the stage and they were a blast, though it was a little jarring to hear double entendre laden songs performed with a chorus of children. After listening to their set I had to find Urban Woman for some breakfast – which we purchased on Market Square. We ate Trio’s smoked pork biscuit which they had developed for the day and it was great – and we avoided the craziness of the other end of Market Street.

I returned to the festival just after two and found it had started to fold. I’m sure a lot of the vendors ran out of biscuits by then, but it was disappointing to see it closing early as I had friends from out of town who were involved in the Children’s Festival of Reading in World’s Fair Park who didn’t get to leave there until 2:00 and so they probably missed it. I walked – easily this time – down to the music stage where the Get Right Band played an excellent set, though the audience was myself, Stacey Diamond and a couple of other people.

It seemed obvious that the footprint for the event isn’t large enough. I’m not sure if Gay Street or the World’s Fair Park are options, but there simply needs to be more space for the event to continue to be successful. There’s already a festival that day in the World’s Fair Park, but the south end is available, I believe and having both festivals on opposite ends of the same site might help both. I’m also not sure but what the ten dollar ticket model has outlived it’s usefulness. Additionally, banners are needed that stretch far above the heads of festival-goers giving directions to the ticket line and some idea of what to do next. With no changes, it seems the event could become a victim of its own success.