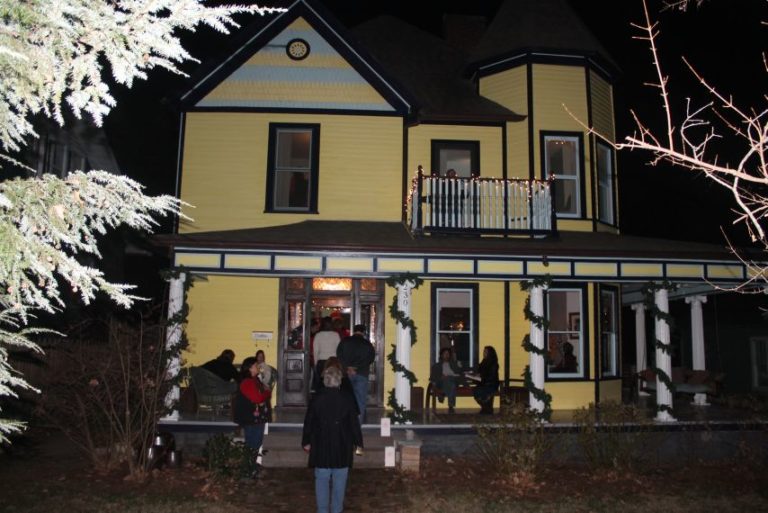 Urban Woman and I have wanted to take this home tour for years and something always came up or we let it pass before we got our act together. This year we were determined to be there, could only go one of the two days, and snagged our tickets early. We enjoyed it as much as we imagined we might. The unseasonably warm and dry weather definitely helped as the walk was considerable and much of the time was spent on the sidewalk.

Old North Knoxville, which wouldn’t be considered north, at all, in 2012 was one of the first suburbs of downtown with most of the homes dating to the early twentieth century. It’s just far enough from the center city that we took a car to get there. Eclectic in style, many have been restored in recent years as the community has enjoyed a parallel resurgence to that of the center city. Some small, many very large, they each feature elements of great interest.

The crowds made the walks between homes a festive experience, but once inside, the crowds made looking at the home, as I would have liked, pretty difficult. I doubt more people participate in this event than the Downtown Home Tour, but for some reason, each stop felt much more crowded. Taking photographs of any quality inside proved virtually impossible, so, while many of the homes included beautiful features, I could not get clear shots.

One of the consistently interesting and sometimes elegant features was fireplaces. In many cases, the stone or tile around them displayed exceptional craftsmanship and often the opening itself was enclosed by gorgeous period appropriate, if not original, fireplace covers. I’ve never considered them before and it became something I looked for by the end of the evening.

The Jessie Hughes house on Kenyon Street had been re-imagined during the remodeling to include a full finished basement where only a clay hole had existed. The stair well was cut directly through a section of the floor and nearly doubled the size of the house. The couple obviously loves a challenge as they’ve already sold the home and are looking for another renovation possibility.

Great art displayed throughout many of the homes included a large, gorgeous Cynthia Markert painting as well as photographs of some of her street art. Many of the homes featured art by the residents, from paintings to drawings, photography and quilts suspended from ceilings. I’m sure it’s a broad generalization, but there seems to be a concentration of very creative people in the neighborhood. The most obvious indication is the ingenuity with which they completed their renovations making the homes something old, but something very new at the same time.

The Jones House on East Anderson Street took the prize for the most unique home. On the surface, it shouldn’t be in the running – it’s a warehouse on the outside and no one passing by would expect to find a home behind its front door. But that’s exactly what lurks there. The former warehouse still features cement block sides and metal supports stretching across it’s twenty-foot ceilings. One immediate surprise to us was the comfort of the temperature. The owner said a heavy layer of foam on the roof made all the difference.

The “rooms” were really just partitioned areas separated by eight foot walls. The decor varied throughout, but paintings and quilts were displayed everywhere. Rooms became cozy corners whose warmth juxtaposed wildly with the massive, formerly industrial space. The couple, who lived in Germany for many years, has settled into the space and hope to call it “home” for good.

I don’t have the time to talk about all the homes, but I’ll close by mentioning one of our favorites: the Hay-Bronstad House on Oklahoma Avenue is beautiful both inside and out. The stairwell is about as pretty as any I can recall and everything about the home is elegant. I’d love to look around without a crowd.

We finished the tour in a bit over two hours which, as I said, included large amounts of walking. Shuttle buses do make a circuit throughout the route, but often it seemed more time efficient to walk to the next stop. Still, once the final home had been seen, we were pleased to see the next bus lumber down the street. Starving by that time, we wished there had been food for purchase at the staging point (Tenova Hospital). We would’ve eaten anything.

If you like this sort of thing, I think you  might go ahead and mark it on your calendar for next year. Homes are not allowed to be on the tour more than once every four years, so the sample will be entirely different next year. There is certainly no shortage of homes that look worthy of inclusion. There are also homes that look like they may be waiting on just the right owner to give them some love and we saw several for sale, so you might consider that, if you are so inclined.