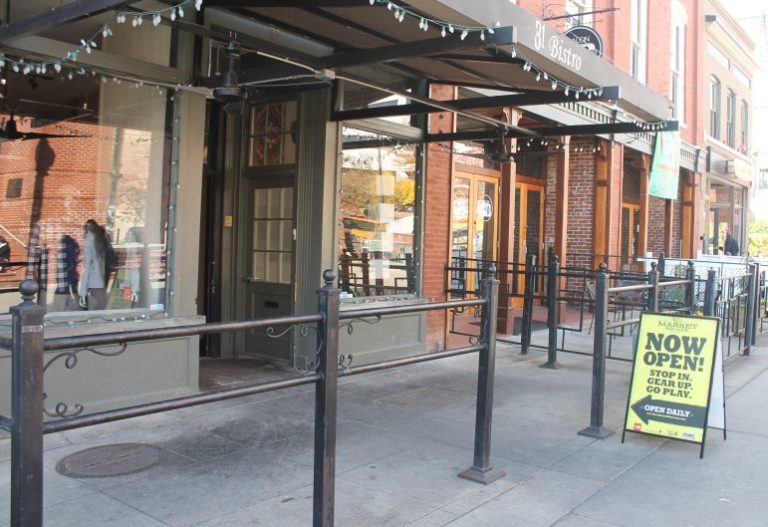 Perhaps I wasn’t the only one startled to see River Sports Outfitters open for business at 31 Market Square this week. A very small, four sentence announcement on WBIR which ran five days before they opened provided the only signal I caught. I believe two of the four sentences contained misinformation. Certainly the one that indicated they would open, “in the next few weeks,” which seemed like a very reasonable time-frame, was incorrect. Additionally, the piece stated that this would be the third location of River Sports Outfitters, which seemed logical, since there were already two locations, but not so fast.

Only six months ago the Outdoor Knoxville Adventure Center announced River Sports Outfitters would assume a retail presence at Volunteer Landing. Much was made of bicycle and kayak rentals along the river and with the re-branding of Knoxville as something of an outdoor excursion starting point for our area, it seemed like a very good idea. I never figured out exactly where they were and made it down there – a reality for many people, it seems. Foot traffic simply wasn’t heavy enough to support the store.

That brings us to Market Square where, as I reported recently, 31 Bistro closed its doors. Instead of opening a third location, it appears River Sports Outfitters has moved all of its inventory from the river location to its new store front. Not so much the kayaks and bicycles, though I do wonder if bicycle rentals downtown might just work about now. When I visited Saturday, it appeared to be unpacked and in place, with the exception of the shoes. Room remained for additional inventory, so I expect it to improve.

As for the river location, I understand there may still be events and classes offered there, but that appears to be a point of discussion within the organization. Until the city solves the larger problem of connecting the river with downtown in a clearly marked, walkable way, I’m afraid the struggle to enliven that area will continue. The potential remains great, but the physical barriers significant.

There are two things happening downtown which I find very encouraging. The first I’ve pointed out before: when stores close they are quickly replaced with another business. This means no matter the specific reasons for a closure, others see clear signals from the center city indicating they might find success.

The second encouraging trend finds established businesses choosing to locate downtown. By this I don’t generally mean chain stores, but stores with one or several other locations. Cru Bistro is a part of a chain and has a location out west, Tupelo Honey has two locations in Asheville, Tree and Vine has a location in Asheville, Rick Terry Jewelers has two other successful locations, Nothing Too Fancy has a successful printing business behind it, Casual Pint has a successful location in west Knoxville as does Southland Lakefront and Mountain Properties.

Why is this a good thing in my mind? While I am delighted at the entrepreneur who puts everything on the line and makes it with a small business, that is the most dangerous way to open the doors on a new venture. So many of the people just starting must have a good cash flow early to make the rent and they risk seeing everything crumble in short order. Again, I love those guys and I cheer everyone of them. But businesses with backing offer more potential for stability with financial backing that assures a bad month doesn’t spell disaster and a track record of success that suggests their odds of having made a good judgement are pretty good.

River Sports Outfitters seems like a perfect fit for downtown. The only store selling similar products is Mast General Store with its downstairs outdoor section. I think there is plenty of room for both to thrive. We need more clothing downtown, particularly for men. I don’t see this store being impacted at all by Urban Outfitters when it arrives as it caters to a largely different audience. And as much as I love restaurants, we’ve been pretty inundated with those recently and there are more coming.

I enjoyed looking around the store and my more outdoors-inclined Urban Son-in-Law seemed happy with what he found. The young ladies staffing the store were friendly and helpful and I’m sure they would be delighted to welcome you, also. The sign outside still said “31 Bistro” as of Sunday, so you’ll have to look closely. Hopefully they’ll have their own sign up soon.