We Have Graffiti, Do We Have Gangs?

Graffiti has never been high on my list of concerns downtown. I see random tagging, but I see it outside downtown, as well, so I figured it just goes with modern society. An irritant? Sure. A big problem? Not so much. I’ve blogged about graffiti in one form or another here, here, here and here, often taking a positive view of the graffiti in question. 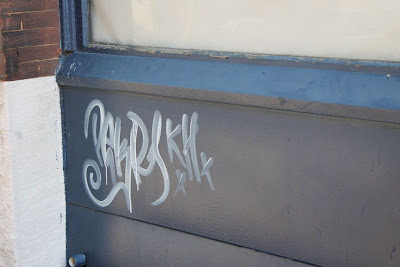 I’m slowly being brought around as I understand more about the unique dynamics that are downtown Knoxville. We aren’t just the neighborhood for downtown residents; we are the collective neighborhood for the region. We also have some baggage that we have a hard time leaving behind.

For many years, perhaps starting in the early eighties, downtown Knoxville was not a place that most people thought of as a destination. Malls were the wave of the future and inner cities were increasingly suffering from white flight and a crumbling infrastructure. Downtown Knoxville, like many other inner cities came to be seen as blighted and dangerous.

Knoxville’s downtown in 2012 is a far cry from those days, yet, we still struggle with perceptions people carry from those darker days of the city’s history. When people visit the city today we want them to have a good impression, and I would suggest, an accurate impression, which is that our downtown is a safe, fun place to visit and bring your family.

We do not have gang activity in downtown Knoxville. This is a fact according to the Knoxville Police Department. The graffiti which some people might connect with gang activity is simply the act of random, bored teenagers or skaters who enjoy seeing their tag around the city. It is unsightly, in no way connected to the street art whose virtues I’ve previously extolled and it is a problem because of the connection in people’s minds.

So what to do? Get rid of it as rapidly as possible is what studies have shown. If it is repeatedly painted over in short order, taggers move elsewhere. If you see graffiti on your own property, please remove it quickly. If you see graffiti on another person’s property, please call 3-1-1 and report it. Hopefully, the city will notify the owners and they will take some action.

It’s important that we keep downtown clean and safe and that we communicate that image to our visitors whether they be from far out of town or from our area. Many people who have avoided downtown for decades are beginning to take a second look. We want that look to be a good one – without graffiti.