Religious Celebrations in the City 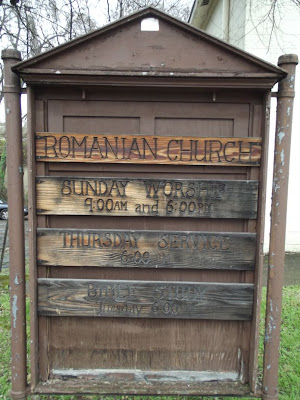 Churches in Knoxville are an interesting lot. When I first moved to the area in 1982 I was told there were more churches per capita here than anywhere else in the US. I’ve never seen data to back that up, but we certainly have a bounty of congregations. Downtown is no exception and we may have more than you realize. I can’t find any evidence that a congregation still meets at the Romanian Church pictured above, though I’ve never wandered over on Sunday morning. I know there is a large Romanian congregation on Yarnell Road in Knox County. Who knew there would be enough demand?

﻿Of course, downtown in the south means the older, mainline denominations are represented, usually with “First” this and that. We have a couple of those. I find it interesting that the Catholics and Baptists are as far apart geographically as possible in our small city. The Episcopals fall in between the two which seems historically correct.
﻿

﻿ Off to the sides are the Methodists and the Presbyterians. The Presbyterians claim to be the oldest continuing congregation in the city, but I think Church Street makes a similar claim. Church Street UMC has the distinction of being called the “most beautiful church in America” by President Roosevelt as he passed through Knoxville on his way to dedicate a little park in the mountains to our east.

Immaculate Conception holds the distinction of having the Poet/Priest of the Confederacy, father Abram Ryan serve there for a couple of years after the war. He is said to have written his most famous poem, “The Conquered Banner” while in Knoxville. Interestingly for me (and Kim Trent), he later served for ten years in Mobile, Alabama, is buried there and has a park and a statue erected to his honor in that city. I’ll have to photograph it for the blog sometime when I’m down that way.

﻿There are several other churches which meet downtown and which may not be as obvious. Knoxlife, which used to meet at Remedy, outgrew that facility and they now meet in the Bijou. The Square Room hosts two different congregations each Sunday, including Crossings and All Souls. Each of these are non-denominational and I don’t think they would be offended to be called “praise” churches.

So, we have your major brands and your off-brands. You have to leave the immediate downtown area to find other faiths, but this being Christmas, we’ll stick to the Christians, for now. If you are interested, I hope you spot one you like. Their schedules for Christmas weekend are listed below. If you enjoy your Christmas, Hanukkah or Winter Solstice some other way, then I hope you find joy with your friends and family.

Knoxlife Church – Christmas Day: 11:00 AM in the Bijou (I’m assuming they will meet – nothing different posted on their web page). This is their regular meeting place and time (formerly met in Remedy in the Old City).

*A prayer for preservation might be well placed if you go to this one. I’m just sayin’!