How else can you describe something that promises a care-free round-trip journey to the destination of your choice at a cost less than the price of the gasoline you would burn to go there in your own car? I was skeptical, but now I’m a believer, with small qualifications.

While out to eat at the previously blogged Crown and Goose Underground with new friends KG and MG, the conversation turned to Knoxville’s Megabus and the fact that the new Atlanta route opened up an entire list of southern destination possibilities. An e-mail followed later that evening that charted a number of the travel opportunities, including Mobile, Alabama. That just happens to be my hometown and continues to be the residence of my parents.

My mother’s declining health has dictated that I make an ever increasing number of trips to that coastal city. It’s almost exactly one thousand miles, round trip. I drove there in September. I drove there in October. When November rolled around and another trip loomed, I lamented the fact that I would be car-bound for sixteen hours with nothing to new to see and a complete inability to read or be otherwise productive. That’s where the Mega-bus map started weighing on my mind. In the Prius a trip costs me about $75 for gasoline. The tickets round-trip were $22.50. It would have been $8 if I had avoided Sunday travel.

My plan for this excursion was to drive down on Monday and return on Thursday. If I drive, I can leave around 4AM and arrive around noon, and feel like I have the day in Mobile. On the Megabus, this wasn’t possible. The first bus for Atlanta leaves at 6:30 AM and arrives around 10:30. Fine, so far. Unfortunately, the next bus for Mobile leaves Atlanta at 4:30 and arrives in Mobile at 9:40 PM. That meant that leaving on Monday wouldn’t give me that day in the city, so I would have to leave a day early. For some trips, this would make the Megabus less than a perfect option. It didn’t matter to me on this trip.

I walked the .75 mile to the bus depot that morning and boarded with a simple show of my reservation number. Conrad, a friend of a friend, boarded at the same time, so it was nice to see a familiar face. The first leg of the journey included about a dozen passengers. We picked up a few more in Chattanooga. I had the two-person seat to myself on every leg of my trip coming and going.

The only disappointment was the wireless, which on all four buses I rode, I either could not get connected or it was so slow it was maddening. I wouldn’t plan on using a laptop to get anything major done while traveling the Megabus. With a good smart phone and a handy book, that wasn’t so much a problem for me. On the bus I was able to read the excellent Letters of Sylvia Beach loaned to me by Miss Flossie at Union Avenue Books and get a running start on Slavery by Another Name. 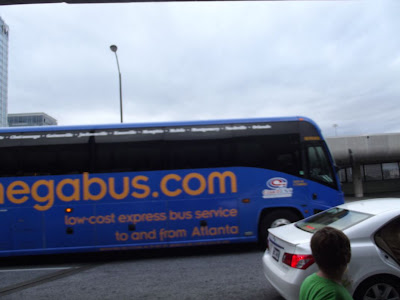 No rain fell as I walked to the bus. It rained all the way to Atlanta and I wondered about shelter during the six hour layover. The rain stopped as we arrived and resumed six hours later as we drove away. Pretty sweet, but six hours in Atlanta in bad weather could be a problem. The drop-off is about a half mile or so from a Starbucks, a mall and several restaurants. It is also at a Marta Station, so really, if you know where to go, you could scoot to anywhere in Atlanta for six hours.

The bus was almost full to Mobile. A brief stop in Montgomery reduced the number slightly. It was also pretty full in the reverse, when I left Mobile the following Thursday. Still, I had the double seat to myself and found them to be pretty comfortable. I’m usually able to sleep about anywhere and sleeping was no problem on the bus. I did have to listen to someone’s rap music two seats behind me from Montgomery to Atlanta, but I figured for a four dollar return trip, I could bop my head about a bit.

The layover in Atlanta coming back is only an hour and a half, which is perfect for snagging a little lunch and a coffee. The bus wasn’t half full coming back to Knoxville. 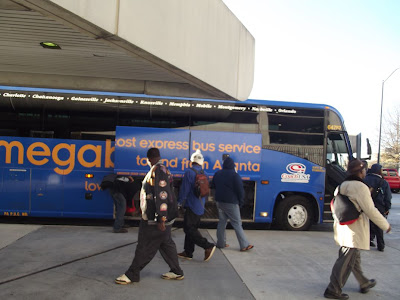 So, I highly recommend it. I found it pleasant, restful, productive and extremely cheap. It takes a little longer and you don’t have a car when you get to your destination, but if that’s workable, it is a really low cost and eco-friendly way to travel. I hope some of you will give it a try – even if you are a little less adventurous and just travel to Atlanta or D.C. I worry a bit that with so few Knoxville customers they might consider cutting our route. Don’t let that happen! Urban Guy has already been back to Mobile once in December and I’ll be going again this month and probably in January. I need that bus!