If it’s September in Knoxville, it must be Mardi Gras?

This weekend wasn’t all reserved for somber remembrances. Of course, being a home weekend for our local football team, plenty of visitors crowded the streets of downtown Knoxville. This weekend the shirts were Cincinnati red and they seemed like a jovial enough bunch as they enjoyed downtown Knoxville. Friday night also featured the first of the Movies on Market Square. The first installment in the free movie series featured “Hook,” while this week’s movie will be “How to Tame Your Dragon.” This year’s emphasis is making the event the most pet friendly movie series in the south.

Visitors and residents alike must have been startled to see a Mardi Gras Parade break out amidst the football fans and movie aficionados. Starting at Kendrick Place where about a hundred revelers enjoyed “festive beverages” and mini-muffalettas, the party got heated up led by chief crewe member Kim Trent, who hails from Mobile, Alabama which, as she pointed out in her inspirational speech is home to the oldest Mardi Gras celebration on the continent.

The next to the last of the “Summer Suppers” sponsored by Knox Heritage, this event, as most of the dinners, sold out completely. The money raised goes to support the very important work of Knox Heritage and the Summer Suppers are always a big part of the downtown summer calendar.

But what’s Mardi Gras without a parade, right? Led by an authentic Dixieland Jazz Band the group took the show on the road, passing through Market Square to undoubtedly befuddled families out for a movie and football fans in town for a game they’d rather forget, though they’ll likely remember this spectacle for a long time to come.

The parade ended at the courtyard of Emporium with more jazz, the ever-present festive beverages, along with “shrimp and crawfish boil accompanied by jambalaya, red beans & rice, bruschetta with fresh tomatoes, crusty bread, and French pastries from The French Market Creperie.” That’s about as much New Orleans as you could ever expect to find in Knoxville on a September night. 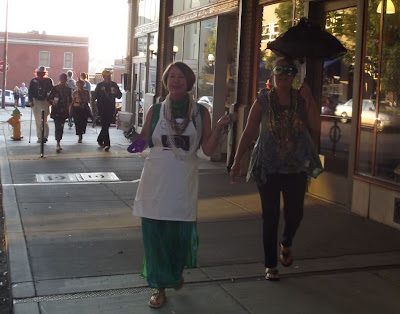 You can check out the list of this year’s summer suppers at the Knox Heritage site and start making your plans for next year. While the final supper is sold out, you still have a chance to catch the Scruffy City Soiree which happens just next week. In the meantime, join the organization and support its work in downtown and elsewhere in the county. They’ll even send you an e-mail reminding you about Summer Suppers and other fun events.

If you’d like to see more (and better) pictures and read more about the event, let me highly recommend that you check out Cynthia Moxley’s Bluestreak blog. She did an excellent job of capturing the fun.

And another word on Jazz: Tonight is the final in the Jazz on the Square series that has run through the summer. World class jazz for the price of a tip and now the weather is nice! The music starts at 7:00. Next Tuesday night a special screening of “A Place for Me: Living Jazz in a Small Southern City” will be presented at the Square Room, along with a jazz concert by Jazz Fourtet, Emily Mathis and Thad Brown.