Perhaps the effort to be a tad more difficult paid off to some small degree: last week’s winner took forty minutes and this week’s winner took over twenty-four hours. Interestingly, there is a small asterisk to that claim: A previous winner recognized the site sooner, but decided to delay officially submitting an answer in order to give others a chance. Aren’t members of the Urban Nation nice people? You certainly are.

So, to review, here is last week’s picture:

Katie Powell logged on Sunday morning and thought to herself, “What a nice chair.” Then she thought, “I know that chair.” She correctly identified it as a condo across from the Downtown Dog Park. She got her rows a bit mixed, thinking it is called “Ryan’s Row,” but I believe it is actually called “King’s Row.” Ryan’s Row, if I’m not mistaken is the row of condos on the hill across and diagonal from the Immaculate Conception Catholic Church. Still, clearly she had the right idea, so we have our first female downtown winner!

She opted to go without a hat, but to include her pug with her mug, since without her pug, Zoe, she likely wouldn’t have been in that part of the city, so they are sort of co-winners, giving us our first canine winner. I offered Katie the chance to plug something and she said, “. . . encourage people to come out to the Botanical Gardens starting in two weeks to support Knox Kickball 2011!” Consider yourself encouraged.

Which brings us to this week’s contest. It crossed my mind that I might take a photograph of a single brick and say you have to identify not only the building but the individual brick. We’ll go easier than that, but this time my friend Shaft has served up some interesting bricks. I’ll just make you guess the location of the brick pattern, not the individual bricks. Remember, to win you need to be the first to correctly identify the location in the comment section below. Next, you need to e-mail me at KnoxvilleUrbanGuy@gmail.com so we can exchange a photograph and other pertinent information. Good luck everybody! 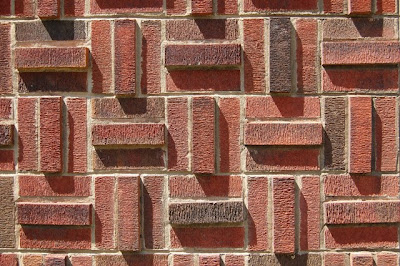