Today I planned to write the follow-up to my Sundown in the City post, but I ran into a Mr. Sydney Young on the sidewalk. I’m going to have to stop walking to my car without my camera, because a simple trip to retrieve the new Dirty Guv’nah’s CD to burn onto my itunes can clearly lead to a story.

Mr. Young was walking away from a certain Hyundai which was featured here recently. That’s right, see the Blackberry Car story below. Mr. Young appears to be anything but – he’s probably well into his eighties and missing more than a handful of teeth. The parking spot where I’ve seen the berry-laden car is where he parks when he drives into town to use the Knox County Public Library. He told me that he worked for TVA, but long since retired. His current passion is the study of China, India and the United States and the differing contributions each will make to the world as we go forward. He had what appeared to be a 500 page book on China, a recent Forbes magazine focusing on the same, and a large notebook stuffed with various articles, pens and bookmarks. In the space of several minutes he extolled the virtues of Christianity, Gandhi and Ivan Pavlov. I struggled to follow the connections he perceived between them all and I tried to hide my surprise when he explained that the edge China has over the rest of the world is their strong family value system – which seemed to have something to do with the differing soils in northern vs. southern China. 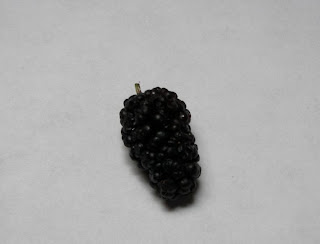 And did we talk berries? Oh, yes we did! I now possess the answer to the mystery. Maybe it is a measure of the fact that I’m writing for city people that no one figured it out before this. It was obvious in the previous post. Look at this picture and be the first to identify this berry. All pictures on the website can be clicked to be enlarged. I’ll honor the first person to get it right by publicly awarding the first Urban Blues Award right here on the web page. Go ahead, take a stab. I’ll reveal the answer, soon.