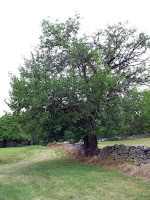 A final word for the night: Mulberry.
Mr. Young said the only place he has to park at his house is under a Mulberry Tree. I thought they only came in bushes and I had no idea what one looked like. Here’s an image from http://photos.igougo.com/

This particular tree is not Mr. Young’s but you get the idea. I swear they looked like Blackberries to me. Congratulations to my good friend Annonymous for being the first person to correctly answer the question. Your prize package is in the mail and, as promised, you are awarded the first Urban Blues prize for your efforts. Honorable mention goes to my friend Debbie who got it right and suggested Mulberry Muffins. Of course, this means that tomorrow the police will be called to the big row at Union and Locust as we each battle to cop the mulberries from Mr. Young’s car.