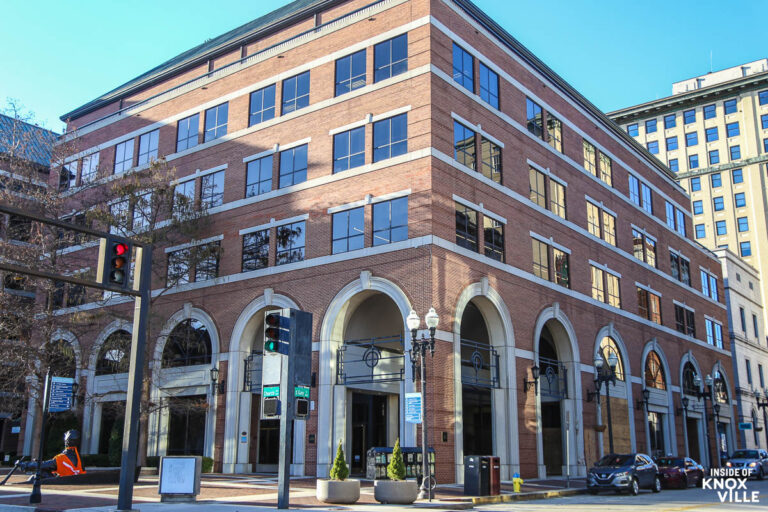 The Cazana family has purchased two downtown structures, an office building and a parking garage, with plans to make improvements to each. Interestingly, the buildings were previously owned by the group, but sold. I spoke with Nick Cazana to learn the background for the decision and plans for each property.

The office building in question is 2 Center Square, which you see pictured above. It’s the pretty building with the arches at the corner of Church and Gay, just beside the Oarsman (does anyone call him anything beside the Rowing Man?) sculpture. It is also the building with one entrance currently boarded and some arches fractured due to a run-in with a bus this past spring.

Mr. Cazana said the group sold the building in 2010 and it has “changed hands a couple of times” since then. I asked him why they would re-purchase a building they sold thirteen years ago and he said, “Downtown has blossomed and we feel that corner is the cornerstone of downtown Knoxville.”

He made reference to the fact that it is across from Tombras and that foot traffic is high. The fact that the next block, long a parking lot, seems to be edging closer to development which would mend that end of Gay Street is also a likely attraction. If that block was developed, the building would be a mid-point of a more pleasant stretch of Gay Street between our two historic theatres. Add development of the Andrew Johnson Building and that section could become the new center of our main street.

I asked about the possibility of having a retail or other more pedestrian-engaging business there and he indicated they are talking with potential retail tenants. He also said the damage to the front of the building is repairable and a settlement has been reached with the insurance company to begin those repairs.

In addition, the new owners plan to modernize the building with new HVAC systems and lobby redesigns (there are lobbies on each floor). They are also investing in new hardscapes and landscaping in the pedestrian passageway between that building and 1 Center Square, as well as the East Tennessee History Center. They are working with 21st Mortgage, who occupies 1 Center Square, on the design for those spaces.

The other structure they reacquired was the parking garage behind the Hilton (on Clinch, adjacent to the Locust Street Garage). He said people have always assumed it was owned by the Hilton, but they simply lease spaces there. He said he considers it the “second ugliest building downtown,” and they intend to change that, as the rendering included here shows. In addition to the outward improvements, the group will transform the garage into a fully automated system allowing patrons to pay with a code on their phones and eliminating delays for paying upon exit.