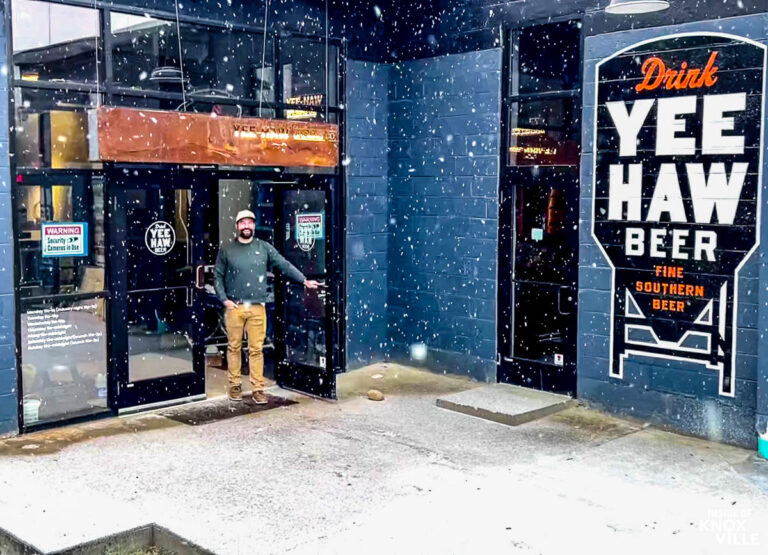 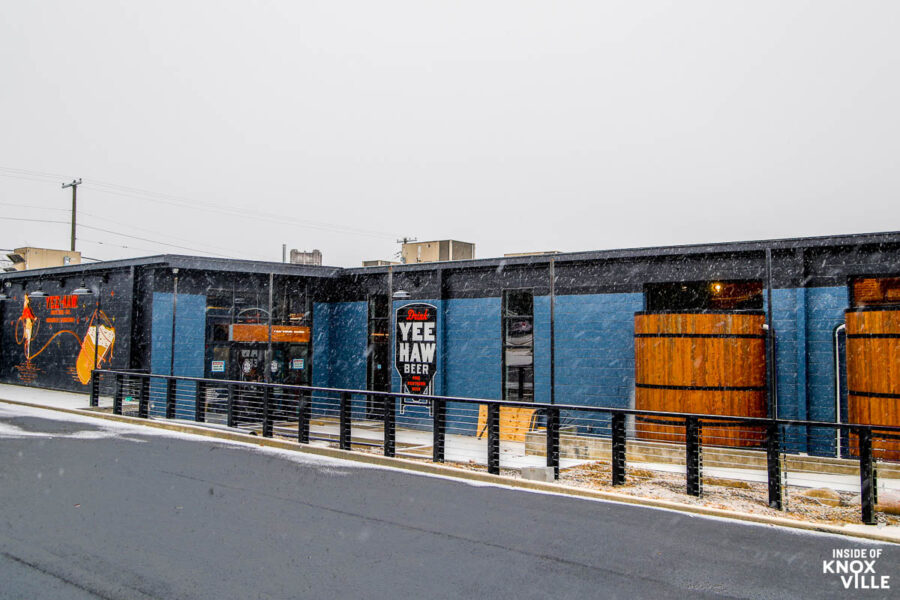 After much anticipation, Yee-Haw Brewing Co. is set to open at the end of January! Charles Ellis, General Manager, gave us a tour and showed off the gorgeous space indoors and out.

There have been several hoped for opening dates, but permitting, supply chain delays and construction costs all hindered the opening. When the construction and renovation began, they discovered several areas that needed to be gutted rather than renovated such as the kitchen and the bathrooms, which also added to the delays.

Owners Joe and Jessi Baker began Yee-Haw Brewing in Johnson City, TN in 2015. They have now expanded to Greenville, SC, Nashville, Pigeon Forge, Knoxville and most recently, Ober Mountain in Gatlinburg with their recent collaborative purchase of Ober Gatlinburg.

The Bakers are also the founders of Ole Smoky Distillery. As Sevier County natives, they thrive on investing in their local community. The Knoxville location will be no different. Knoxville local, Charles Ellis, who has been in the Knoxville service industry for 25 years and is a certified brewer himself, was hired as general manager when talks of the project began in 2019. He has been with Yee-Haw Brewing Co for over 6 years.

Local muralists, Tim and Nicole Coulter with Coulter Signs executed the fun and playful murals inside and out that were masterminded by the Yee-Haw design team and also do work with the other Yee-Haw locations.

Ellis emphasized the importance of being a good neighbor and working with the businesses surrounding the location to maximize the positive impact on the community around them. One way they are doing this will be a monthly collaboration with local breweries to bring flavors and brews you won’t find anywhere else.

As you enter the taproom, you will be greeted at the sales counter to order your food and drink. It will be set up as a fast, casual style of dining with food runners rather than wait staff. There will also be 4 beers on draft at the ordering counter with other places around the taproom you can order other beverages to avoid waiting in long lines. They will partner with an outside eatery for some popular items but will also have vegan options, gluten free options and more from popular executive chef (previously of Club LeConte and Maryville College), Matt Boyd.

When Elkmont Exchange closed, many mourned the loss of their brews. Not to worry, Ellis’ first hire was Chris Meadows, former brew master at Elkmont Exchange and widely accepted brewing genius. You may taste some familiar flavors at Yee-Haw if you were an Elkmont fan. You will absolutely find tried and true Yee-Haw brews with around 20 beers on tap daily as well as ciders and 3 wines on tap.

The cider taps are branded ‘Tennessee Stud’ and are brewed at the Knoxville location and already being sold in their first cidery in Gatlinburg. There will also be a wine-based creamer line; think something similar to Kahlua with lots of different flavors that can be mixed as a cocktail or poured straight over ice and enjoyed.

Ellis hopes patrons will feel the theme of inclusivity and welcoming for anyone who wants a fun space to hang out. One way they are supporting that theme is serving nonalcoholic beer and cocktails. They are partnering with Best Brands for the nonalcoholic beer options by Untitled Art.

There is something for everyone here.

While some of the taproom has a familiar feel, they have created different spaces to welcome all personalities of customers. Whether it be to watch a game on the 9-foot jumbotron inside, do some karaoke or an acoustic set on the smaller indoor stage or sit in a quieter outdoor green space to catch up with friends, they hope to accommodate all. Ellis said it was a big deal to him to be welcoming and inclusive as they planned out the space. He describes a family friendly environment inside and out with furry pals welcome outdoors.

Jessica Watson will be scouting for local talent to take the indoor stage each Saturday and Sunday for brunch. They plan for a jazz brunch and an American brunch once each month. Other plans are Industry Night every Monday from 10 pm – 1 am , free concerts, sporting event viewing parties and with an additional dedicated private event space, it sounds like there is something for everyone on the horizon.

In addition to free concerts, Yee-Haw has partnered with Born and Raised Productions to bring in high caliber talent and turn the beer garden into a successful, full scale concert venue. The fenced beer garden and green space can hold 700 and has dedicated restrooms inside of the fencing for safety and to allow for the ticketed events. The 24-foot jumbotron will give everyone in attendance a great view no matter where you are.

There is also a full bar outside with the same beverages on tap as the taproom along with wine on tap and 4 adult slushie machines. To work with all types of weather, there is a bit of overhead covering, radiant heaters and fire pits and fire towers for cold temps and large fans for warmer temps. There will be outdoor foosball, ping pong, shuffleboard, and corn hole with lots of outdoor furniture for comfort.

Yee-Haw Brewing Co. hours will be:

The soft opening will begin the last week of January with 2 rough-out nights with the staff, a neighbor night, and industry night and will cap it all off with a Grand Opening at the end of February. Expect lots more photos when the opening arrives.