A Family, A Home, and New Hope 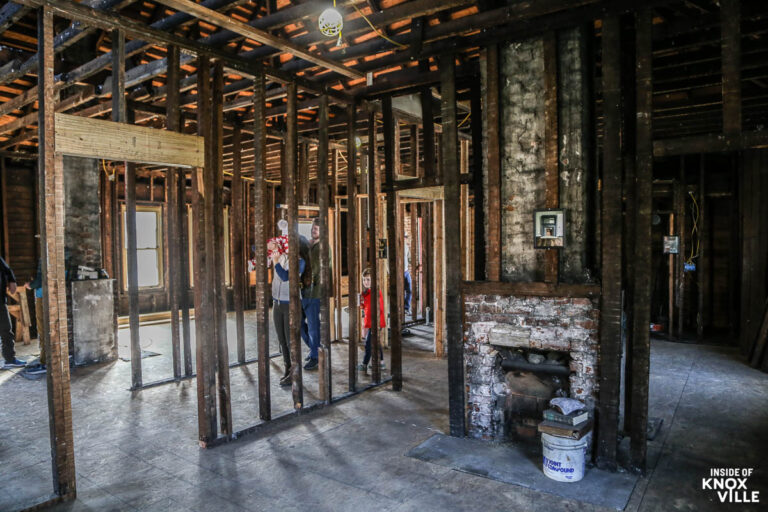 A small home at 119 South Cruze Street, in east Knoxville, just a stone’s throw from downtown, is shining this Christmas as a beacon of hope for Knoxville couple Alvin and Jeanine Johnson. Married four years and facing difficult obstacles, the two longed to own their own home, but seemed destined to continue to rent. Enter Renaissance Creations and it appears the dream will come true.

Jeanine is originally from Knoxville, but was living in Powder Springs Georgia when she was connected with Alvin through a mutual friend. Both Jeanine and Alvin have been diagnosed with multiple sclerosis, and it was in physical therapy that she met a childhood friend of Alvin’s who set them up. Though he was currently in Wilmington, Delaware, they dated and were married within ten months.

In 2020, the couple moved to Knoxville, where she took a position as a Housing Coordinator with C.O.N.N.E.C.T. Ministries, while Alvin worked with the Urban League as a Health Coordinator. In their new roles, they were helping people like themselves find the resources they needed. They both became a part of their community and reconnected with her childhood church.

I spoke with Scott Branson, Founder and Executive Director of the organization. He said they began doing similar work in 2013, but officially filed for 501(c)(3) status in September 2018. I asked him why it was started and he said, “Part of the vision of seeking the peace of the city would be health care, education, jobs, food. We knew how to work on houses.” They began to search for blighted properties that could be restored and sold to people in need who would benefit from home ownership. “It’s about community restoration. That’s why we go after blighted and condemned houses.”

He said a catch phrase they use is “let’s get the lights turned back on.” He means it in both the literal sense (and says KUB is great to work with), but also it means bringing hope back to that location. He pointed out that when they begin work on a home, “the whole neighborhood shows up . . . When we match that with a family, then the lights are really back on. When you can do something that’s a sign of life, we’ve seen a whole street change.”

They actively pursue people below eighty percent median income and they take no government money. At the end of each project, it allows them the flexibility to price the house as needed. “Our goal is always 80% market value,” meaning they are gifting equity up front. They put in safeguards to prevent house-flipping, but he said that isn’t really a problem. The people they find are simply happy to own a home and to be a part of a community.

He said as they’ve gotten to be better known, they now have people approaching them with the idea of donating or selling homes at very reasonable prices. He told the story of one home, appraised for $136,000 they purchased for $100,000. They put money into restoration and sold it for $129,000. The family had lived in various rentals in the neighborhood for seven years, but now had the opportunity to build a life in their own home.

The group has restored over twenty homes from some degree of disrepair into their current forms. Most of those involve gut jobs like the current project, though a few have been to help families already living in the home. He showed me a photograph of a home in Burwell with the same floorplan that was in a similar state when they took possession from the city. It is now a beautiful home just about six months later.

The current home was given to the group. Ownership and possession was a little murky, so it took some work to get the papers lined up. The owner simply wanted someone to take it who could get it up to code. He said a front room was more than waste deep in debris. The rear of the house was so packed that they didn’t know a second bathroom existed until they unearthed it.

He said they find some of their families through the website, but often it happens more organically: Someone knows someone they recommend. Once identified, the new homeowners are involved in planning and construction as much as possible, earning “sweat equity.” They hope to impact the fact that so many people in Knoxville cannot afford home ownership and the fact that neighborhoods have deteriorating homes.

He said they focus on neighborhoods surrounding Knoxville. They have a hard time finding affordable properties in South Knoxville, due to the surge in housing prices there. They also do not work in Fort Sanders. They brought about five houses in Mechanicsville back to life and worked on several others that needed help. They’ve done homes in Londsdale, “and we’ve been all over Oakwood-Lincoln Park.” He said they’ve worked extensively in Parkridge and others in Whittle Springs.

He said they have great partnerships with Pinnacle Bank and a range of subcontractors. They also have great volunteers and are open to having more. Skill level isn’t as critical. He pointed out, “we have the masks and sledgehammers!” There is also painting and other work to be done which doesn’t require a background in construction.

I asked Jeanine how the couple came to be connected with Renaissance and she said it was more a case of her finding them. As part of her job she was at a gathering of non-profits at the Mill and Mine. As she networked with others there, she came upon Renaissance. While she was looking for ways she could help her clients, she realized she and Alvin could personally use their help. After sharing their dream of home ownership and their story, the representative from Renaissance said they would probably be a good fit. And the story moved forward to the beginning of construction on their new home.

Jeanine said she was excited to see a front porch and fire places. Alvin said she has an ability to see the potential in things and that was the case with the home. “She can look at the worst and see the best out of it.” She said they had been looking and trying for so long and had been disappointed repeatedly.

The couple hopes to move into the home at the end of March or April. That also happens to be when their lease ends on their current rental. She said they were laughing as they got out of the car that day when they realized the street number for the home is the same as their current apartment number.

They’ve got a small kitten (Marley) and a puppy (Rudy) and they can’t wait to give them a new home. She said early on when they were dating they talked about the movie Milo and Otis and she confided that since she’d seen that years ago, she’s always wanted a cat and a dog. “When he said, ‘me, too,’ I knew he was the one.”

I will look forward to sharing a follow-up as the Johnsons move in this spring. In the mean time, if you’d like to learn more about this organization, you will find their website here, or you can follow them on Instagram.