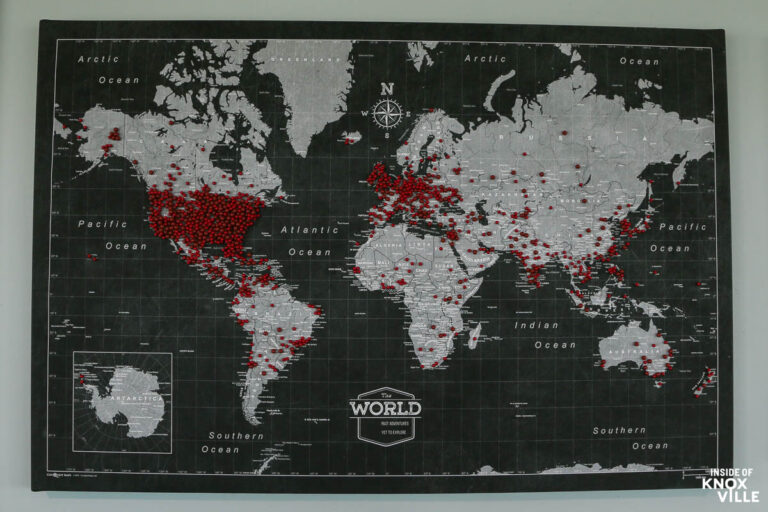 This past Friday, inside the Sunsphere, Visit Knoxville celebrated its tenth anniversary in its current incarnation as the city’s official convention and visitors bureau for the City of Knoxville and Knox County. Over that time it has constantly evolved, adding the Visit Knoxville Sports Commission, the Visit Knoxville Film Office and renovating the Visitors Center, as well as reimagining the Sunsphere. They are charged with advertising the city, recruiting conferences, sporting events, film and television production and supporting all manner of community initiatives.

The group has been recognized for its contribution to the city by government officials across the political spectrum, with leaders past and present issuing congratulatory statements:

I had the pleasure of working with Visit Knoxville in the early years. I have been consistently impressed with the hard work this organization has done to promote Knoxville and continue to be proud of all that Kim and her team have achieved in recent years.”

As Knox County Mayor in 2012, I was in involved in the scrutiny of the Knoxville Tourism and Sports Corporation and the formation of Visit Knoxville. It was a challenging beginning, but I am beyond pleased with how Visit Knoxville has come out on top and continues to build with a strong vision of advancing tourism.

There has never been a better time to visit our city, and that’s thanks to the hard work of our partners at Visit Knoxville. They do a tremendous job showcasing all we have to offer, putting Knoxville on the map as a destination for business travelers, conferences, and tourists. Their work also helps attract world class events to our region, in turn helping our local economy. Thank you and congratulations on 10 years as Visit Knoxville!

I am thrilled to work with Visit Knoxville and am continually impressed with what they do. Over the past several years, we have hosted world-class sporting events such as a record breaking Bassmaster Classic, the Mid-Atlantic CrossFit Challenge, and USA Cycling. We have been treated to top-notch concerts including Garth Brooks’ historic event at Neyland Stadium, and Sir Paul McCartney at Thompson-Boling Arena. Thanks to VK, the World’s Fair 40th Anniversary brought to town over 40,000 visitors from all 50 states and 33 countries. All of that is in addition to the conferences, conventions, and amateur sporting events that we host nearly every week. VK is an outstanding asset to Knox County, and I am truly thankful for their efforts in making Knox County a big-time tourist and event destination.”

I spoke to Kim Bumpas, President of Visit Knoxville who gave credit to other stakeholders who have helped make Knoxville a tourist destination and noted, “Tourism is the number two industry in the city, so it’s a big deal how you market it . . . All of that is what equals tax dollars.” She said in 2022, Knoxville has shattered records in every tourism category that is monitored.

The Sunsphere has been a large part of that success. For years there was no monitoring of visits to the structure and so, it was impossible to know how many people visited and whether they were local or from elsewhere. That is no longer the case. “We opened on February 22, 2022, so not even a full year . . . In that short amount of time, we have welcomed over 42,000 visitors who paid $5 donation that goes in the Sunsphere Fund, and they represent 34 countries and all fifty states.”

Bumpas teased that there will be upcoming announcements about the structure of the Sunsphere and how to make it a more serviceable tourist attraction. She also promises that over the next three years there are new major events coming to the city. “I’m grateful for the opportunity to do this . . . and for people to see the hard work our team has done. We’ve brought in world-class events that have showcased Knoxville internationally . . . The next ten years are going to be better than the last ten years.” She said, we are on the map as a premier (domestic) destination” and said the group plans to expand Knoxville’s international appeal.

Other markers noted included that downtown hotel rates have increased 43% over the last eight years, to over $161 per night. Tax collection has grown by over 107% and visitor expenditures in the city were over $1.65 for Knox County in 2021, fourth highest in the state (behind Davidson, Shelby, and Sevier). During that year, Knox County welcomed a total of 6.8 million overnight visitors. Tourism accounts for more than 12,630 jobs in Knox County.

It takes more than one group to make a city grow and no doubt, as Kim acknowledged, there have been a lot of people pushing and pulling to make Knoxville grow over the last decade. It is also clear that Visit Knoxville has played a pivotal role. Here are some of their highlights from the last decade and here’s to the next ten years.

A look by the years:

2012 – Establishment of Visit Knoxville; hosted National Horseshoe Pitchers Association World Tournament, the Entomological Society of America’s Annual Meeting, and the Ozone Invitational; brought on an agency partner for marketing, re-created the website, branding and much more

2013 – Hosted the Southern Food Writers Conference as part of the International Biscuit Festival; partnered with the Public Arts Committee, the Arts & Culture Alliance, the East Tennessee Design Center and CBID to spearhead the Knoxville Mural Project with the initial mural painted at the Visit Knoxville Visitor Center on Gay Street; renovated the Sunsphere’s Observation Deck for the first time in 31 years

2015 – Hosted the Medal of Honor Convention at the Knoxville Convention Center; partnered with the Knoxville Chamber and the University of Tennessee Offices of Admissions to produce a new Visitors & Relocation Guide and a new UT Visitor Guide; began installation of VK Network to showcase the experience of Knoxville via a video loop in key venues, attractions and hotels

2020 – Hosted Alpha Kappa Alpha’s Southeastern Regional Conference and the NAIA Swimming & Diving National Championships just prior to the start of the COVID-19 Pandemic; partnered on the KNOXTOGETHER community initiative in response to COVID-19; launched “For the Love of Knoxville” CARES Act campaign

2022 – Reopened the 4th Floor Observation Deck of the Sunsphere (welcoming over 42,000 visitors from 34 countries and all 50 states to-date); hosted and assisted with a record number of journalists; launched a new website; partnered with Live Nation on Paul McCartney’s Get Back Tour; partnered with the City of Knoxville, Knox County, the Downtown Knoxville Alliance, and Block by Block to launch K-Town Connect; hosted the 40th Anniversary of the 1982 World’s Fair Celebration