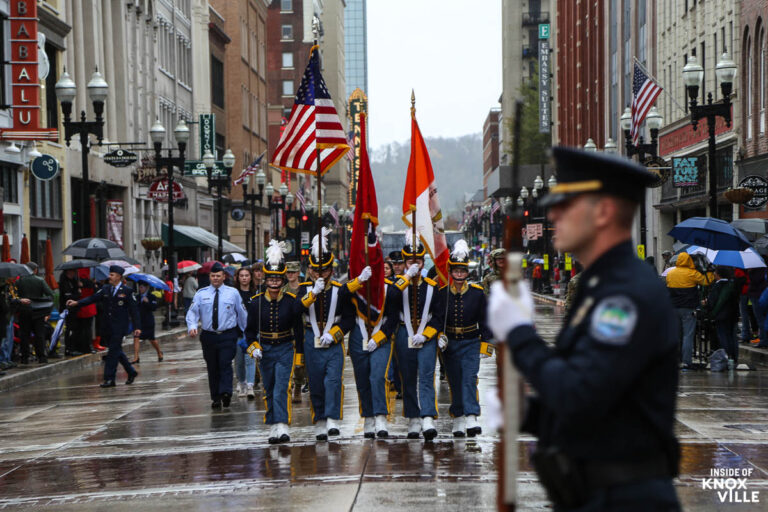 Friday found cities across the country celebrating Veterans Day, and Knoxville celebrating its 97th. It’s a day celebrated in many other countries, recognized as the end of World War I. The war ended on the eleventh hour of the eleventh day of the eleventh month of 1918. In 1954, Armistice Day was renamed, at the request of U.S. veterans organizations to Veterans Day, a day to honor all honorably discharged veterans. 11:00 am is, accordingly, the official start of the parade at the Grand Stand.

The day of this year’s parade was a rainy one in Knoxville, which resulted in fewer bands willing to expose their instruments to the conditions and perhaps other cancelations, as well. Shout out goes to the Carter High School Marching Hornet Band for representing! Otherwise, the parade was a bit shorter in the face of a steady drizzle and the crowd looked to be several hundred, rather than the usual thousands.

Elected officials were in strong supply, with Mayor Kincannon and U.S. Representative Burchett on hand and participating in the induction ceremony at the beginning of the parade. Joining the parade were Tn. Senator Becky Duncan Massey, and state representatives Gloria Johnson and Sam McKenzie.

More importantly, many groups joined the parade who help veterans with their struggles, as well as a number of veteran groups. The parade focused on women in service and, in line with that, the Grand Marshal this year was World War II Veteran Corporal Eileen Neiler. There were also poignant nods to groups such as the purple heart veterans and Gold Star mothers.

While a bit short, soggier, and sparser than previous parades, this one was met with enthusiasm by those present. Typically one of the heaviest attended parades in the city, it holds a place of central importance as it heads toward its 100th anniversary. The parade is sponsored by the City of Knoxville and American Legion Post 2.

I was fortunate enough to end the day that evening with the Knoxville Symphony Orchestra as they performed related music and honored veterans, as well. TAMIS provided footage of local veterans speaking of their experience and both the concert and their accounts were inspiring.

I’ve included select images in the body of the article, but you can view all the shots in the group below.