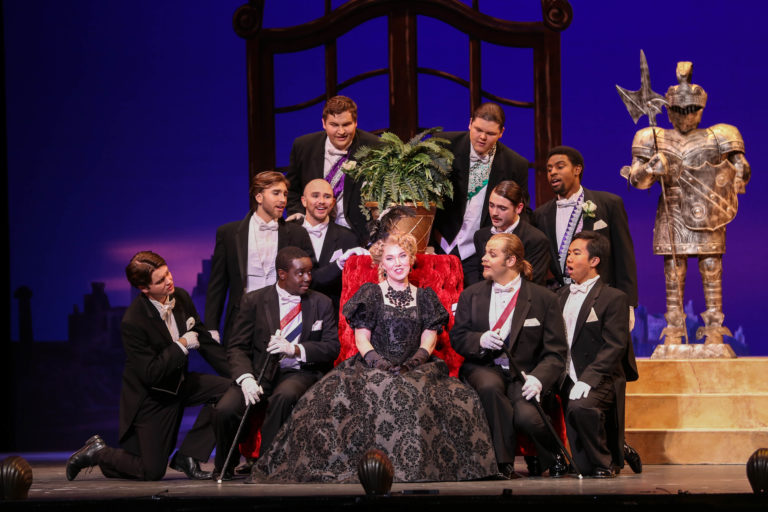 Tonight and in a Sunday matinee, Knoxville Opera presents The Merry Widow by Franz Lehar. Originally written in German, the libretto will be performed in English and includes both speaking portions as well as singing. The whimsical comedy is a co-production between Knoxville Opera and the University of Tennessee Opera Theatre. Kevin Class conducts, Dean Anthony is Stage Director, and James Marvel is Production Director and Artistic Associate.

The opera debuted in Vienna in 1905 under shaky circumstances. Its original stars,  Mizzi Günther and Louis Treumann, helped fund. Just prior to its opening the theatre lost faith in the production and wanted to cancel. It proceeded to a slow box office for the first two weeks before reviews began increasing business. The run extended to 483 performances and the production toured Austria the following year.

In 1906 the opera was performed in Germany and in 1907 it was recorded for the first of many times. In 1907 it began production around the world, including its first production on Broadway. Translated into many languages and performed around the world, it is one of the most financially successful operas in history. Estimates suggest it was performed a half million times in the sixty years after its debut and sheet music sales have totaled in the tens of millions of dollars. It has even spawned product tie-ins (corsets and chocolates!).

The merry widow herself, Hannah Glawari (performed by Susannah Biller), inherits a large portion of money, which her countrymen fear will leave the kingdom should she marry elsewhere. They conspire for her to marry Count Danilo (performed by Sean Anderson) who is the only person not interested in her or her money. Or so it seems. There is a history there that no one knows.

Meanwhile, the primary conspirator, Baron Zeta (performed by Gary Simpson) has problems of his own of which he knows not. His wife Valencienne (performed by Donata Cucinotta) is spending her private time with Camille (performed by John Riesen). She decides he should marry the widow to avert attention from their relationship. Throughout, Njegus (performed by Gregory Sliskovich, making his company debut with Knoxville Opera), Danilo’s assistant, provides much of the comic relief.

As always with Knoxville Opera, the production is a feast for the eyes as well as the ears, with not only wonderful music, but beautiful sets (designed by Jefferson Ridenour) and costumes (designed by Glenn Avery Breed and provided by Wardrobe Witchery). Photos included here are from the final dress rehearsal.

You can learn more about the production here and purchase tickets here. Tonight’s performance takes place at 7:30 pm at the Tennessee Theatre, while Sunday’s is at 2:30 pm in the same venue. Tickets start at $25.