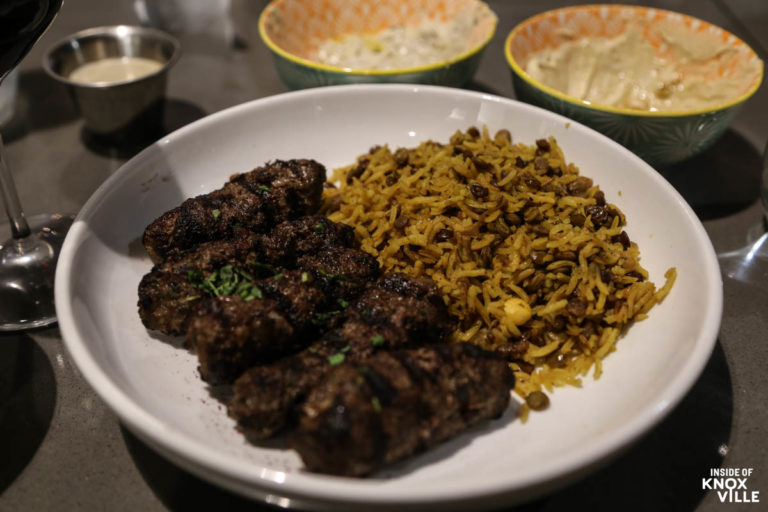 Kopita opened at 524 South Gay Street in July 2019, becoming downtown’s first vegan restaurant. A pandemic followed in short order and, for a while during the early months of the pandemic, Kopita expanded to offer a sister restaurant, Kopita Meat, just two doors down. The two later consolidated, offering an expanded menu. When a larger restaurant space became available just down and across the street inside the Embassy Suites at 507 South Gay Street, Avi Zenatti, chef and owner with his wife Illana Brodt took the opportunity to expand the restaurant and broaden the menu even further.

The restaurant operated with the same menu for the early weeks, but has now shifted to a larger, full menu. I stopped in to speak with Avi and was joined by Orel Brodt for the conversation. I followed up with dinner at the restaurant.

Avi said that he’d read an article recently about his native Israel that explained a new trend of opening quality restaurants inside hotels. He said major chefs are following the trend there, but he thinks it may take a while here. He’s doing everything he can, and has plans going forward, to make that time now for Kopita.

Since moving, they’ve begun a late-night menu and they will soon begin offering their food in the Radius rooftop bar. Eventually, they will begin a room service menu. He said, “It takes time, but everyone who comes here loves the food.” Orel added that an additional barrier may be an educational one, as not everyone is familiar with the food.

We looked at the new menu and Avi pointed out the signature drinks, like the Jerusalem Cocktail made with Arak 100 Proof Turkish Spirit, Fresh Grapefruit Juice, House-made Chamomile Simple, Fresh Squeezed Lemon Juice, and Champagne Float. Other drinks include a Moroccan Mojito, and a Desert Rose Martini. Beer and wine are also served, as well as a range of interesting non-alcoholic drinks such as Israeli Grape Juice, Israeli Non-Alcoholic Beer, and Moroccan Hot Tea.

The restaurant is open six days a week, as Avi explained, “Sunday I decided to give a break to people. It’s a different operation over here. There’s a lot of preparation in the day and a lot of work at night.” He said the kitchen is thoroughly cleaned after food service hours. He’s open Monday since so many downtown restaurants are open.

While the new menu is greatly expanded with dinner items, it also includes all the lunch items fans of the restaurant have come to enjoy over the last three years. Avi said they intended to have a separate menu for each meal, but soon learned that some returning customers wanted the lunch they loved for dinner also, so he accommodated them. He also has a full section for vegan options, which has grown in length, but the menu also has a full non-vegan section.

With so many iterations in such a short time, that included a pandemic, Orel pointed out that some confusion from customers is to be expected. She said restaurants typically go through a significant change every three years and this one has gone through multiple changes during that time.

Avi said that being in the hotel has some great advantages, many relating to maintenance and cleaning (like of the bathrooms) by the “excellent crew” of the hotel. He’s pleased with Ilana’s décor and says more work will be done. They have also continued their Shabbat Dinners. “Our last Shabbat Dinner we had 110 people.” They happen the first Friday of each month. “It’s become a tradition here and people love it.”

He said they are also increasing their catering business. I interviewed them the week before Pride, and he said they were hosting and catering a wedding reception for two gentlemen during the festivities. He’s also continued working with UT catering. “It’s like a new restaurant but kept the same team. I’m still learning.”

One thing that hasn’t changed is the emphasis on including only fresh ingredients. He said he’d just gone to the Market Square Farmers’ Market (where I see him regularly) looking specifically for beans, which he didn’t find. He said, “If I had found beans, I would have cooked them today. I’m going to the market on Saturday and if I can find good lamb, I will do a special.” Some items are Friday and Saturday only so he can make sure he can sell it all so that it remains fresh.

“Every day we learn something new, and I will be developing more items . . . People are beginning to to recognize our steaks (the Denver Cut, 16 ounces, $38) served with salad and potato.” He’s also proud of the Rack of Lamb (weekends only) with 5 pieces for $40, plus sides. “People come only for the rack of lamb.” They also offer a unique Moroccan Spicy Fish (Cod or Mahi Mahi) Tagin ($30). Desserts are still evolving, but they continue to offer their popular baklava and they have added ice cream from the Phoenix Pharmacy and Fountain.

We enjoyed a delicious meal there with friends after the interview. We started with the hummus and babaganoush with their unbeatable pita for the table. I had the Beef and Lamb Kabob (pictured at the top of this article) on rice, and it was delicious. Others enjoyed the Shwarma and Schnitzel pitas. We ended the meal with ice cream and baklava (perfect) and, maybe my favorite of the night: Turkish coffee which was worth the trip by itself and as perfect as I remember it when I first had it in New York City a few years back.

You can find more details about the restaurant at their website or go directly to the menu, here.