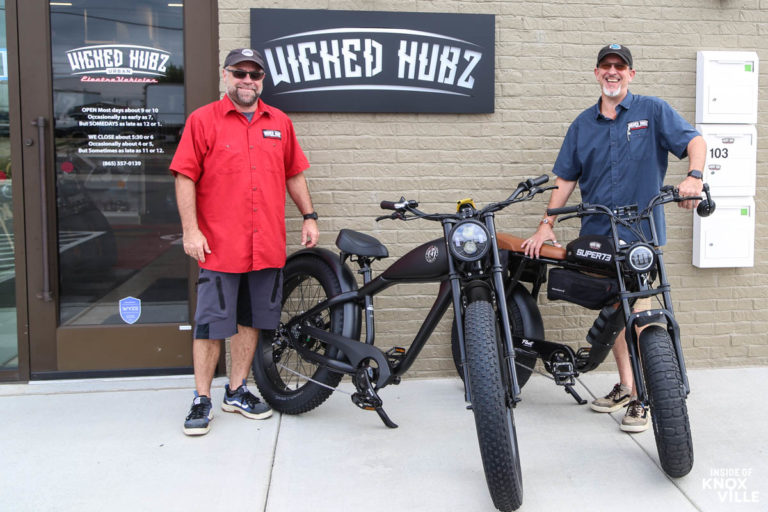 You know something’s different about the place when you get to the front door of Wicked Hubz and see the hours posted, “Open Most days about 9 or 10, Occasionally as early as 7, but SOMEDAYS as late as 12 or 1. We close about 5:30 or 6, Occasionally about 4 or 5, But Sometimes as late as 11 or 12.” The tone continues inside the doors at 2300 North Central Street, Suite 103, where owners Jeff Tucker and Scott Porch are having fun following their passion for electric bikes.

Jeff was born in Ohio, but grew up in Florida. He moved to Hartford, Tennessee in 1997 and became a raft guide. “I lived in Florida and I spent all my vacation time coming to the mountains.” He decided he would rather live in the mountains and vacation to the beach. He met Scott while working on the river and they’ve been friends since. He lived in the mountains and eventually got another job. He moved to Knoxville a couple of years ago. “We started riding one-wheels and electric bikes around town and having a blast, so we figured everyone else would want to have that kind of fun.”

Scott grew up in middle Tennessee, in Tullahoma. He attended Carson Newman College, majoring in business management, and working summers as a river guide. He worked as a manager in the river guide business for a while, returned to middle Tennessee, then returned and started Rural Area Delivery Systems. He said they got one wheels and figured that out then found some e-bikes and fell in love with the funkier models. Soon the idea of a brick-and-mortar store was born as they didn’t see the kind of shop around town that they envisioned.

The bikes are not your mama’s e-bike. They are cool models that look more like a motorcycle, with fat tires and larger though, as I learned, very light bodies. At first glance they looked like mopeds to me and the lines, I was told, can get blurry. They are Knoxville’s authorized dealer for Super 73 bikes.

They say the bikes can easily go 40 or 50 miles on a charge, “depending on how many hills you go up, and the more you pedal instead of just using the throttle, the farther you can go.” The two say you don’t have to really power the bike with the pedals, as much as spin them to add to the charge. “They will go forty-five miles per hour, no problem.” Without modification, they are limited to 28 miles per hour. They said they are perfect for a local commute or simply for fun.

They have some Wicked Thumb bikes which are “stretch motorcycle type frames. They look more like the Indian motorbikes. They are great for commuting, but you just look cooler.” Most of their bikes are new, though they carry a few used bikes and are always interested in possible trade-ins or purchasing used bikes to add to the collection. They say they can get any kind of electric bike or one-wheeler you might want delivered quickly to the store.

While they aren’t a mountain bike store, they may carry some electric mountain bikes in the future. They’ve looked into EUCs, or electric unicycles and some “cool electric long boards.” For now, they are focusing only on the electric bikes and one-wheels. Still, they said not to be shy if there is something you want that they don’t have in the store. They are happy to help.

They hosted a grand opening this past Saturday and are now open for business. Just check out the hours and drop in. The phone number is also on the door and they say they can run over any time. You can learn more about the business on their website and follow their progress and announcements on their Facebook page.