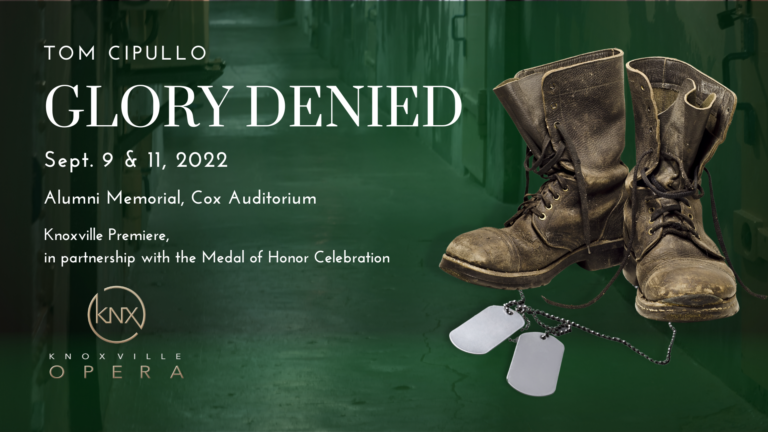 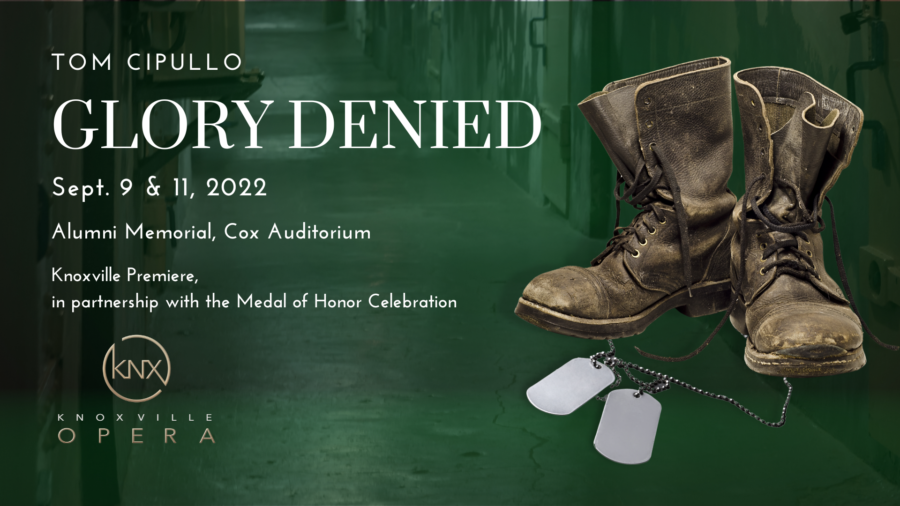 Though more properly connected with the Medal of Honor Celebration, Knoxville Opera’s Glory Denied doesn’t really connect with September 11 in any other way than scheduling. Still, if that extra pull of patriotism that stirred in the country twenty-one years ago and which many of us feel on this anniversary prompts you to consider attending a reflective event based on a difficult time in our country’s history, this might be for you
The opera, which will be presented Friday night, September 9, and Sunday, September 11 at the Cox Auditorium (Alumni Hall) on the University of Tennessee campus, is based on a book by Tom Philpott.  The book tells the true story of Colonel Jim Thompson, America’s longest-held prisoner of war at nearly nine years. The story examines not only his captivity, but the struggles that followed his liberation.
The night does not end with the opera. A unique opportunity awaits those who attend, as after the performances, the composer of the opera, the author of the book, and special guest Captain Bill Robinson (an East TN resident who was the longest-held enlisted POW in Vietnam) will speak and interact with the audience.
Tickets are available for purchase here. Additionally, Knoxville Opera will provide free tickets to all currently enlisted and veteran members of the armed forces and their families who wish to attend. Free tickets are available here.
Mayor Kincannon and city officials will also observe the anniversary with the annual wreath laying ceremony Sunday morning at the 9/11 Memorial on the lawn of the City County Building. A moment of silence will be observed at 8:46 am and First Baptist Church will ring its bells noting the time hijackers crashed American Airlines Flight 11 into the North Tower of the World Trade Center.

The climb pays tribute to the 343 firefighters who gave their lives at the World Trade Center 21 years ago.