Big Ears Announces the First of Its Tenth Anniversary Lineup

Big Ears will be presented March 30 – April 2, 2023 in what will be its tenth anniversary. Themed accordingly, “Ten Years of Big Ears,” it promised to continue to push the envelop with stunning world music, celebrating the best music the world has to offer. Over 150 concerts in twelve venues will fill the three days all across downtown.

As has been the case in the past, the festival organizers are announcing the acts in waves and the first wave was announced this morning at 9:00 am. Festival passes go on sale this Wednesday, September 14 and, if the past is an indication, they will sell out rapidly. As for highlights, that depends on whom you ask. I love some of the headliners, but some of the other artists have been among my favorites at previous festivals and other chance encounters.

The opening lines of the press release highlight a few:

There is so much to unpack there, including pop-crossover artists Los Lobos and Rickie Lee Jones. I’ll anticipate those artists, along with perennial favorite Béla Fleck, of course. That said, I saw Christian McBride at the Village Vanguard last December and it was positively sublime, so I will try to hit everyone of his shows.

A chance to see Marc Ribot, Bill Frisell (with the Knoxville Symphony Orchestra), Bill Frisell, or Edgar Myer is worth the price of admission, alone. The Bad Plus performed one of my all-time favorite sets at a previous Big Ears and I’ll definitely target them this time around. The list is filled with must-see entertainers all the way to the very end of the list: Xylouris White. I saw them perform at the Mill and Mine in 2016 and was blown away by Jim White on drums and Cretan lute player George Xylouris.

As Big Ears enters its 10th iteration, not only is there a place for a festival audience to enjoy exciting and truly adventurous music, but that place is indeed Knoxville, Tennessee: a city on the forefront of the tectonic shift of the American cultural landscape being driven by the South.

“The spirit of Big Ears – its heart and soul – is deeply rooted in the essential role of art and culture in developing a strong community,” says founder and Executive Director Ashley Capps. “We are here to celebrate the creative spirit – to find inspiration in tradition while embracing change and innovation. We are continually inventing and reinventing ourselves year after year with a steadily expanding audience that shares that ideal, that spirit and vision.”

The hype is real. As much as I get excited about the artists with whom I am familiar and look forward to seeing favorites from past festivals, the truth is I’ll come away as or more excited about artists I’ve never encountered until the festival arrives. The joyful act of discovery is what makes the festival so powerful.

The entire, evolving lineup is viewable at bigearsfestival.org, “with more performers and special programs, films, readings, talks, exhibitions, happenings, parties, and surprises still to be announced.” 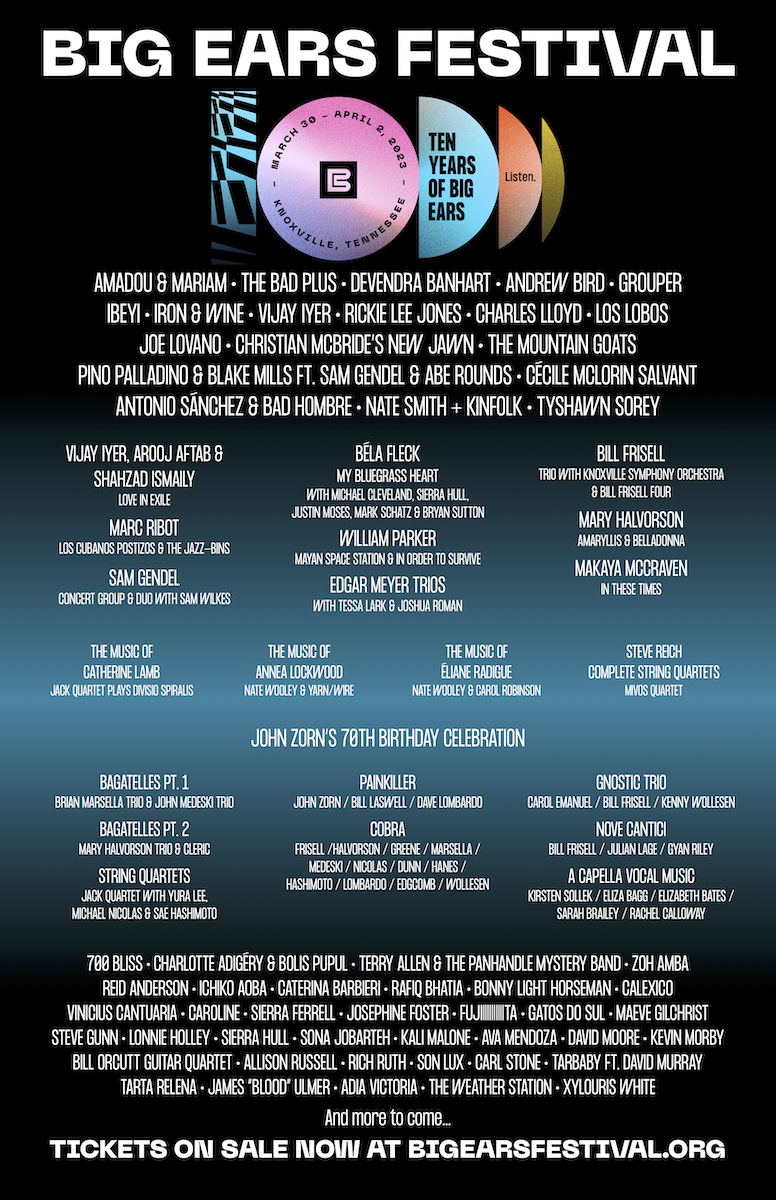