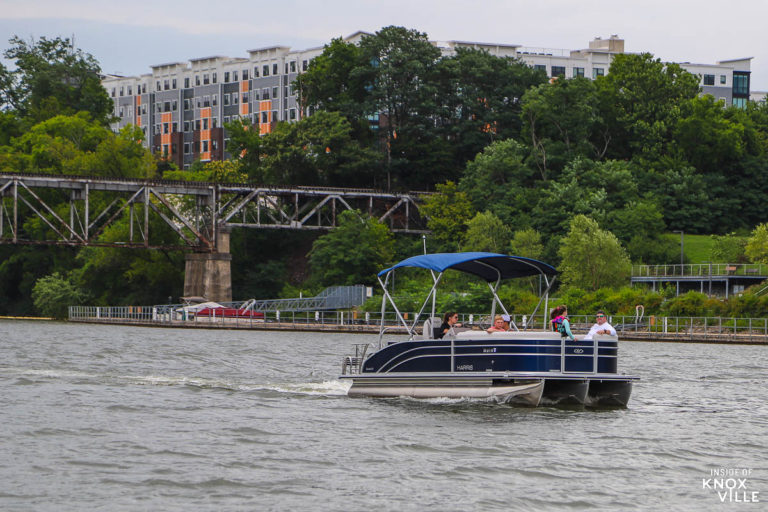 One of the Boats from Freedom Boat Club, Tennessee River, Knoxville, July 2022

Freedom Boat Club, which started in Sarasota, Florida, and now has boats docked in over 300 locations across the country, in Canada and in Europe, is opening a Volunteer Landing Freedom Boat Club with a fleet of four boats. I spoke with Mariah Lawrence, a partner and Chief Operating Officer for Middle and East Tennessee, and Johnny Miller, Director of Operations for East Tennessee, to learn more about the business and what we might expect locally. We also went on a fun boat ride.

Mariah grew up working at Choto Marina. After college she was asked to head a Freedom Boat Club which was located there at the time. She operated it for eight years from 2012 to 2020. She met Bill Sheriff and became a partner, working in middle Tennessee. She moved from two locations to six in a year-and-a-half. When the opportunity came to expand aggressively into east Tennessee, she leaped at the chance. They are opening three locations in east Tennessee this spring and summer. 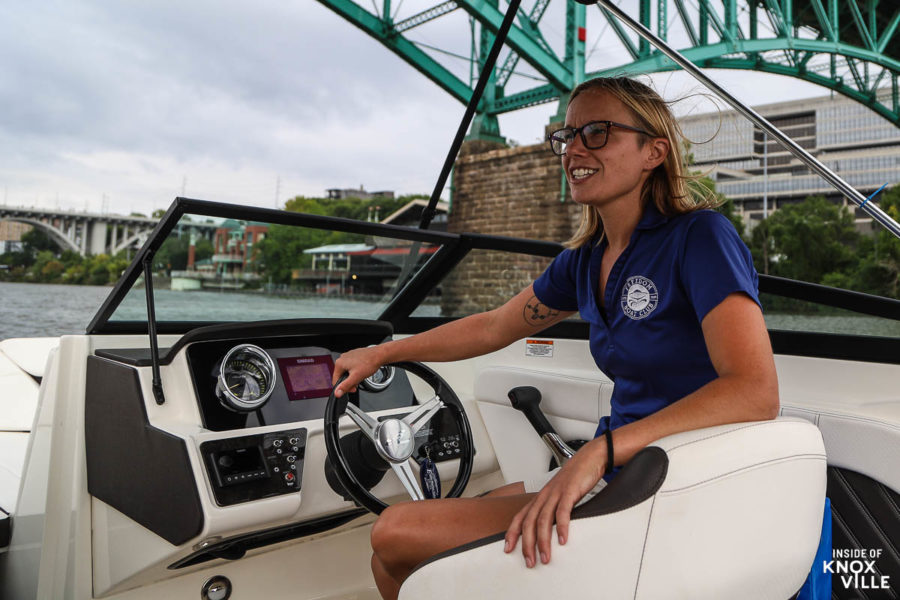 Johnny will be managing the local details and is known to many of us for his work in the brewing industry and for his woodworking. I asked him how he got involved in something so different. “I’ve been involved in other startup businesses in Knoxville and when FBC began looking for a candidate to fill the role of Director, my name was mentioned by a mutual friend. My reputation, combined with my love for the water, made for a perfect fit for the role.” He said he’s enjoyed being on the water his whole life.

The club started in 1989 as an alternative to boat ownership and rentals. By the early 2000s the club had grown throughout southwest Florida and at that point began to franchise. There are now 350 locations worldwide, with a few corporately owned, but most franchised like the downtown Knoxville location. It is owned by MMB Boating ventures with majority owner Bill Sherriff and others, including Mariah. The entire company was purchased by Brunswick in 2019.

For some people the club serves as an entry point to boat ownership, or a way to try it out. It also gives them a chance to try out different kinds of boats. For others, the flexibility and simplicity of having a boat ready whenever you like, without the pains of ownership is the better option.

There are two different membership options. The base membership gets access to most boats, such as the Boston Whaler and the Sea Ray 230SPX at the downtown location. The premium membership would include ski boats and other 100K-level boats. Each level of membership requires an upfront fee that ranges from $4500 to $7000 (which would be the select membership for friends and family).

The monthly fee runs $400 to $600 per month. Use is unlimited and reservations are made online. Spontaneous use is also allowed if boats are available. Anna, the downtown location manager, will have the boat ready for use when you arrive. Morning reservations run from 9:00 am to 2:00 pm, though you can arrange to arrive earlier. Afternoon reservations are from 3:00 pm to sunset. You can also book an all-day reservation.

An interesting twist to membership is that members are allowed to book out of any Freedom Boat Club in the world. A family from out-of-town took advantage of the Knoxville boats while I chatted with Mariah and Johnny. Mariah said Spain was on her radar as an option for her and there are now a dozen or more locations there.

All members are required to complete two hours of online training with Angie Scott and her online class. Additionally, two hours of on-water training with a certified Coast Guard approved captain with the company is required. As a contrast, the state of Tennessee does not require training of anyone born before 1989, while those after must get a boating license. She said safety is a focus for the company.

We took a cruise in the 250 SDX (Dolly). It really is fascinating to experience the city from the river. We enjoyed moving slowly, generating a cool breeze on a warm day, but the boat could also really move if asked to. Urban Boy said it was almost as good as watching Mindcraft videos on Youtube, which is high praise coming from a seven-year-old boy.

Johnny pointed out that another distinction for the downtown location will be level of service. They will have a golf cart available to shuttle people from their hotel or parking garage in downtown down to their boat and back. One possible pick-up spot is Knox Brew Hub, which would offer the possibility of picking up some beer and then riding down to a boat.

Mariah pointed out the river allows people to experience the area in new ways:

Go fifteen minutes one way and you have beautiful views of the mountains. The water is nice and there are really great areas to drop an anchor, relax, and swim. Going upriver, within five minutes you can get a different view of Ijams or the Island Home Airport. You can travel to the French Broad or Holston.

The two said they would love to see a community dock on the south side of the river so area boat owners could easily visit downtown or south Knoxville via riverway. Johnny said, “Knoxville is a river city,” though sometimes it isn’t perceived that way. He’d like to play a part in changing that perception. “There’s a lot of opportunity for people to get on the river, but they just don’t know.”

The group also plans to work with groups like Tennessee RiverLine to work with river cleanups and river care.

For the grand opening, everyone is encouraged to come down to check out the boats and talk about the membership in more detail. There will be food and drink starting about 5:00 pm. For those who are so inclined, a sunset cruise will begin around 8:00 pm.