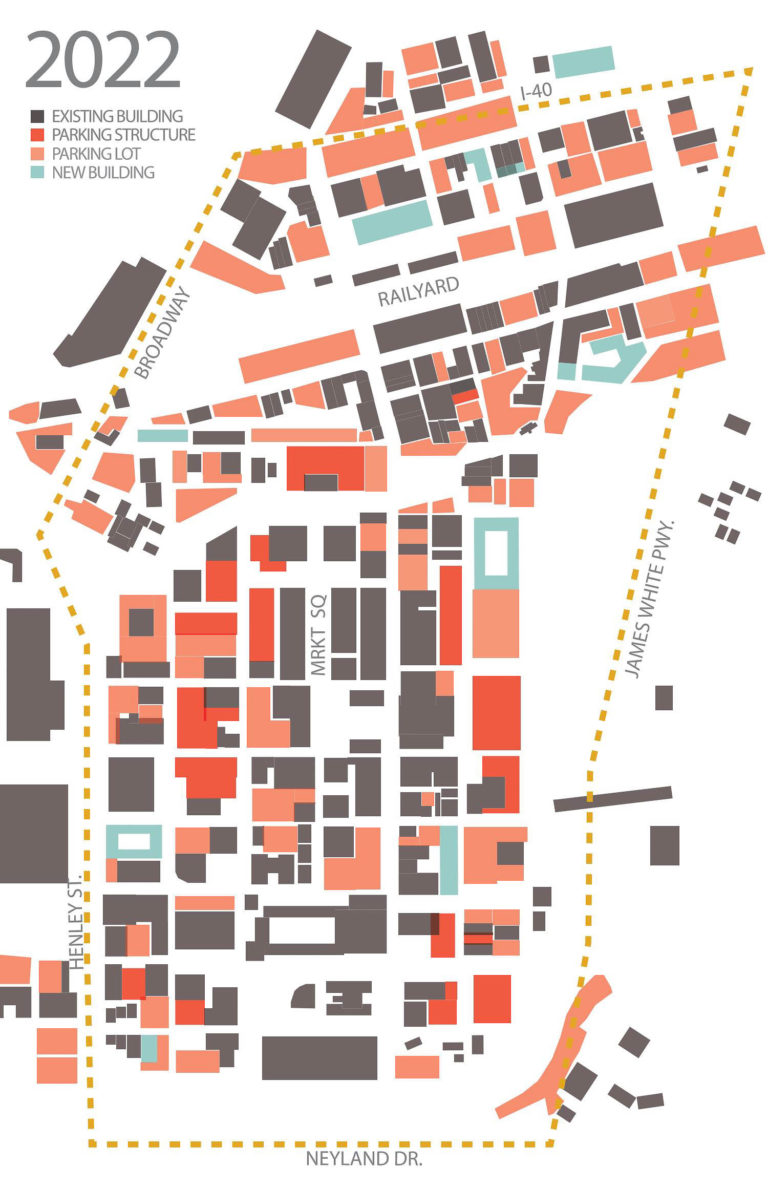 Marble Alley, which opened in early 2016, was the first modern era ground-up construction in the last three decades. It began a trend that has seen a number of buildings added and others proposed. For the first time in decades, we began making buildings out of parking lots, rather than the other way around.

But how much impact have we made? It seems construction in downtown has been ever-present for the last decade, but have we turned the tide? Are the parking lots filled or is downtown still dominated by places to park?

Whitney Manahan, local architect, made the original graphic and recently reached out to say she’d updated it. We met and talked about the development and the path it has taken. You might not have noticed that a lot of hotels are built or proposed. (Yes, that is a joke. I know you’ve noticed.) She also expressed concern about the missing middle in housing construction in the city (think Kendrick Place or City House).

To the point, if you look at the photograph at the top of this article, you’ll see that downtown was largely filled with buildings, few gaps in sight. The blocks are easy to spot because they are all filled in. Big buildings, small buildings, all neatly arranged on a perfect grid until they reached the ridge over the rail tracks.

But there was a problem. Where to park the growing number of cars on those narrow streets? Parking lots proliferated in the following decades as the population exited downtown for the newly automobile-accessible outer neighborhoods. Suburban destinations promised unlimited parking. How to compete? Knock more buildings down to offer convenient parking! By 2014, the city looked like the photo below.

If you count parking lots and parking garages, the density remains. But they don’t count. Compare the two maps above and you’ll realize that most of our buildings were gone. A few, such as the Whittle Building, City and County Building, TVA Towers and others had been built during that time period, but they replaced others. Mostly the two maps show the massive proliferation of parking spots.

Make no mistake: In our car-centric world we need parking. The question is how we accommodate that preferred mode of transportation while preserving the city. People come downtown to be embraced by interesting buildings while enjoying food, drink, and fun inside them. Yes, they want to park, but look at the proportions we developed by 2014! To have a downtown that is more than two-dimensional, we must have more buildings than those on a strip along Gay Street and surrounding Market Square.

But we’ve made progress, right? Most definitely. Marble Alley got the ball rolling and we’ve had a number of ground-up developments since then. I count eleven (indicated in teal) on the map below. Some are quite large, including the nearly complete apartments on the old Supreme Court parking lot, Regas Square, Stockyard Lofts, and the Marriot. Others are small, but also important in filling in small spots which were empty only eight years ago.

As much as we’ve filled in some of the gaps and, in the process, removed parking lots and restored some of the fabric of the city, the map above also makes clear that our very small downtown footprint is still dominated by parking. If you look at the burnt orange color (excluding the red which are parking garages), you see there are still somewhere north of 80 parking lots in the small area. If we are to increase density, it will need to be there.

The next map includes the eight or so spots on which new development has been announced, but hasn’t necessarily begun construction. If those projects come to fruition, we’ll be nearing twenty ground-up construction projects in a decade. A pace of two a year seems a bit slow as it is moving along, but that pace is increasing and, in retrospect, it adds up.

Removing the parking lots from the equation and simply showing buildings and parking garages as the map does below shows how we’ve improved in the last eight years, while also showing the remarkable density the city enjoyed in 1935 compared to today, even with our mini-explosion of new construction. Imagine how different it must have been to wander those dense streets nearly ninety years ago. Hopefully at some point in the future new generations in the city will enjoy it once more.